Awoke feeling a little groggy today. Spent the night sleeping on a sofa as I was too tired to sort my own inflatable matress out. It had been a tiresome night after all the cycling we had done thus far and the incredible food we had consumed. Last night Chris and I had a case of incurable giggling. I laughed so much that I cried and my stomach hurt. I firmly believe that long distance cycling induces madness.The Dawson-Bowman's prepared us a suitable breakfast and after following our usual routine we set off.
It was a very cold start, visibility was poor as eveywhere was foggy. With our lights shining bright and wearing our high visibility jackets we left Neilston, Lanarkshire. Not far into our journey, I swear I caught a glimpse of Brian May (guiatarist from Queen) bopping along the side of the street. We continued a wee while and passed over the Erkskine bridge which gave us an awesome sight of Scotland. Some of the group stopped not long after to take pictures. I stopped too, and fell off my bike! No worries, no damage done. Our first stop was at the foot of the beautiful Loch Lomond.
Loch Lomond was a very welcome stop. Hannah, as usual, had prepared us lovely sarnies once again. By now the sun was starting to come out too and the day was warming up.
The next leg till lunch was fast paced. I cycled off, leading Ben B and Nathan for 10 miles before Ben took place at the front and we cycled on a further 5 miles or so. Our pace was so fast that we left all the other cyclists behind. We stopped and waited for the group to catch us up, but this never happened - we had taken a wrong turn. A couple of random cyclists pointed out to us that we had taken this wrong turn, and now that we had waited 30 mins we had to back track a little way and race to reach the group. Nathan was leading us out now, and boy he must have been hungry. Nathan nailed it for a good few miles and I was finding it hard to keep up. Shortly before we reached the others I took place at the front again and nearly flew straight past the group who had started eating lunch in a layby. This section of the ride was on horrible bumpy roads but the view of the Loch was stunning. We stopped a while, had lunch and set off again.
After lunch I cycled with Ben A. Ben kept me amused by sharing stories and singing African songs. As we were cycling along, a plane flew overhead and the sound was so loud I nearly fell off my bike in shock. I turned to tell Ben that I nearly fell off, and can you believe it, he fell off! Ben got back on and we cycled some big hills with beautiful scenery, mostly big mountains, to look at as we gritted our teeth and climbed to the next stop.

More sarnies were consumed at this next stop. Our stop was in a car park and I got chatting to random folk before we set off again on our last leg. My brake blocks seemed to be a little wonkey, but hey, decided to just press on. 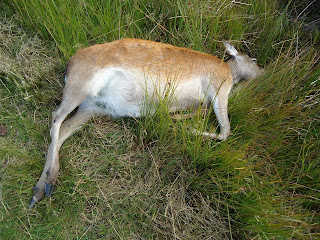 Big long descent which went on for miles. I felt like I was being rewarded for the big hills I had climbed earlier. This descent pretty much led us too our destination. Our destination was Glencoe Youth Hostel.
Glencoe Youth Hostel was a bit grotty on first sighting (we had been staying with excellent hosts). Chris and I were sharing a room with some other random folk (we had originally thought it was just us 2 in a room). Our faces soon brightened up when Hannah called us for dinner. Hannah had prepared a big pasta blognese meal. Devoured my food quickly and typed this blog entry super fast (at a cost of £2). Unable to add any pictures but will update at a later date. Plan to shower now and then go to bed.
Cycled a distance of 89.93 miles, at an average speed of 13.6 mph and a maximum speed of 37.1 mph.
at September 03, 2010