Today is not the greatest. Indeed, today is the day that I return to work. Don't get me wrong, I'm gratefull for having a job, it's just that now I am back in the real world and already missing new friends and adventure, the smell of deep heat  and the taste of pasta (hmm, then again...).
Chris Hodges asked each of us to scribble a testimonial down at the end of the trip. The idea behind this was, I guess, to preserve and share some memories that would last forever. I did the same and present my testimonial below (in all honesty, am not really sure what a 'testimonial' is, but it's a nice big word that sounds kinda cool). 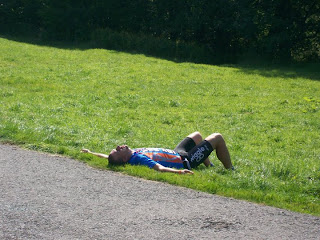 At the request of Chris Hodges, I write here a testimonial for the LEJOG 2010 trip in support of ‘Help4Happys’s’. In the short space I’ve had to think over the last 9 days of challenge, it is proving difficult to put into words what this adventure has really meant to me.

This journey has touched me on numerous levels.


I like a good challenge and to achieve something I only dreamt of doing once is quite awesome. As most are aware, I have now successfully completed LEJOG twice, this last time with an added personal challenge of including Southernmost and Northernmost points of Mainland Britain too. Both these challenges could not have been done without support of all the cyclists involved. LEJOG 2010 was supported in so many ways. Support came in the form of each other, but add to that our support crew Hannah and Mike, our awesome hosts - the Jones’, the Avery’s, Downend and Shrewsbury Christadelphians, the Sutcliffe’s, the Dawson-Bowmans, top that with extra support from friends, family and work, add a sprinkle of random good natured folk and you have the best support one could hope for. Over and above all of that, God had blessed us greatly with good weather, healthy bodies and food. Without this support system in place, LEJOG 2010 would not have been completed.


Senses were out of control. The sheer enormity of landscape and the beauty of creation seen with my eyes. The banter, laughs and kind words I was able to hear. The smell of the seaside, tuna, pasta and Chris (ha!). The feel of soft handlebar tape and rockery roads. And the taste of glorious foods and the ocean air.


How beautifully are we made? Amazing to think that my pair of legs travelled over so many miles and still function. Sure pain was an experience and my head went to some ‘dark places’. But with the support outlined above, was able to by-pass this and even race to various destination points.


On one hand is great that the challenge is completed, well done one and all. Is nice that my bum can take a short rest and my knees won’t feel discomfort for a while. On the other hand, what a shame it’s finished, I have not laughed like this in an age and am missing folk already. Is great to see family and friends again and totally awesome seeing my little puppy dog Cody, but like I say, new friends are being missed already.


Is great to consider that we have helped others too. We have helped those poor kids in Africa. Families and friends have gotten together and support just seems to grow. I could go on and on, but I guess it’s time for me to go. I will conclude by adding just a few words about my fellow riders:


Ben Adams aka ‘Badams’. Not a bad bone in this guys body. Such a nice all round dude, never a bad word to say about anyone or anything. Fought through sickness and came out a winner.


Ben Bramhill the ‘king of the mountains’. Such a strong cyclist, I think he took us all by surprise at how he just got fitter and fitter whilst the rest of us got more and more whacked.


Chris Hodges the legend! I miss this guy more than anyone else. Chris was just so funny. A clever, witty guy with an awesome sense of humour and a heart of gold.


Dave Cross Very fit and knowledgeable cyclist. Kept the group together and seemed to have legs that wouldn’t wear out.


Guy Kieser The Kieser chief! This guy was responsible for a number of knackered men. Treat this guy with caution. The manager of the team, and what an awesome job he did. He completed his LEJOG challenge on a broken wheel!


Ian Cross Part-timer (ha!). Very fit and knowledgeable, much like his brother. Was missed when he left the group after only a few days.


Nathan Briley the triathlete. The energy bar/gel/drink junkie of the group. This guy was like a power cell with his bursts of activity. Impressed with the way Nathan showed others that LEJOG 2010 could be completed on a triathlon bike!


Steve Cross The youngest member of the team. I think this guy had a rocket hidden in his shorts, he was so zoomy fast. Very fit like all the Cross’s.


Hannah Bolton and Mike Brown Our wonderful on-hand support crew. These guys were awesome at looking after our every need, acting like mum, and feeding us!

I also wanted to provide some statistics. These are as follows: