Got up at another painfully early time the morning of our final ride. Breakfast was per usual, all eating porridge together, except Chris who would eat Alpen or Muesli (probably the cause of his terrible wind). Considering the lack of sleep and the fact our bodies had been pushed for so long, we all appeared in good spirits. 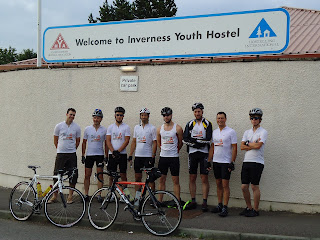 The day had a nice start weatherwise. On reflection, the weather for this whole trip has been great. We only had 1 spot of rain early on in the challenge and at that time we took refuge in a pub. Once leaving pub, the rain had stopped and we never saw it again. We experienced no rain in Wales or Scotland. To top that, we all have a cyclists tan - white hands, white feet and half brown legs and arms. Steve even has a tan mark on his face from his helmet straps. The beginning of this final day was great on many levels, including a nice big descent pretty much from our Youth Hostel in Inverness right over the first bridge we encountered. I spent the first leg of this day chatting mostly with Chris, he said 'talking to you Tim, is like opening a window to another universe' - I like that quote. At out first stop we had sarnies again. These sarnies were different though, for this leg we were treated with macerel instead of tuna.
Cycling to the next stop was difficult. This stretch seemed to go on forever (and forever is a very long time). I could not find a good pace and I just couldn't get comfy. At least the scenery was nice and I lost count of how many bridges we crossed today. I think Chris was suffering a little too - he took a cheeky nap at the next stop. 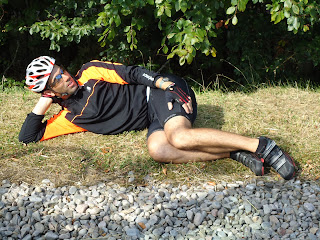 Next leg was also difficult. This must have been the most undulating part of the challenge. We all started off as a nice chain, but this soon split up with 3 cyclists in a group at the front, followed by Timmy no mates (my good self), and a group of 3 at the rear. Is probably good I was by myself because only the voices in my head heard my groans and complaints. Everything hurt and my pain threshold was on red alert. Even the wind was menace at times here, blowing right in my face. My senses were working well though and the smell of the seaside was great and the view of the coastline was awesome. Then, before I knew it, it was lunch.
Lunch was like magic. After I had eaten I felt great again. It was like I was given a second, fresh pair of legs. Happy days. The lots and lots of big ups and downs that followed were all suprisingly fun. Seemed to get to the next break stop without too much bother at all.
The next section too Wick was super zoomy. Young Steve, Ben B and myself sped off like lightning. We all took (reluctant) turns at the front of this group whilst the other 2 slip streamed. We all stopped short of the next break stop, so the whole group stopped together.
This last stop was great because we all knew that only about 20 miles were left to John O' Groats. I, however, was looking at about another 50 - I had a certain Northernmost point to conquer. As much as I tried to convince others to come with me, this was going to be a solo expedition. I wished the others well, downed a can of Nathan's monster energy juice and sperated from the group after about 1 mile.
This last section started off great. I felt like I was following a great black tar river - the road surface was smooth, the wind had gone and I was zooming along. It felt like Nathan was pulling me again as I was reaching and maintaining speeds of about 25 mph plus. Nice. I wrote directions on my fingers, but these directions soon became destructions. The B874 I was supposed to follow until it joined the A836 had vanished. I was at a fork in the road and decided to take a right onto the 876 (not sure if this was an A or B road). This section slowed me down a little, but my shadow gave me much amusement (felt I wasn't talking to myself anymore). After some time I found a signpost pointing to Castletown. This was good news, Castletown was in my instructions and was only 8 miles away. After these 8 miles I took a right and started to follow the A836 to Dunnet. Yay, my goal was not too far out. 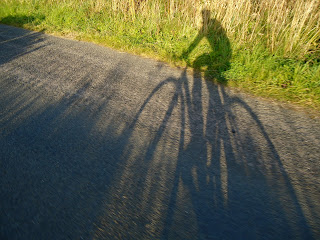 Slight menace happened here. I needed a toilet stop but no where suitable could be found for what felt like an age. I thought my luck was in when I found a caravan park. Silly me, I raced up the drive, hit the loose stones and swiftly fell off my bike (this is the second time I have fallen off my bike this trip). Got back up, raced to the toilets and found they were locked. Not wanting to put pressure on either my bladder or my bowels I cycled standing on my pedals (off the seat) all the way to Dunnet Head. Was pleased I had found the way to Dunnet Head but forgot how tough the climb up to the top was. When I reached the top I took a photo of my bike against the sign that read 'Dunnet Head, the Northernmost point of mainland Britain'. The view up here was great but the whole place felt a little eerie and was desolate. 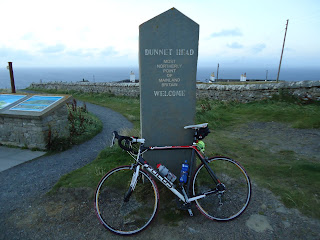 From Dunnet Head, I was only about 15 miles away from the finish. Getting to the finish was tough though. The descent down from this Northernmost point was difficult and scarey. The wind was blowing real hard and shunting my bike from side to side. I remembered the same thing happening last year. Not only was staying on the bike difficult due to the wind, I couldn't sit down either because I still needed the loo! Finally got to the bottom again, out of the wind, and only 12 miles left to cycle.

Was so happy once I found a pub. I darted in, ordered a pint and went straight to the toilet! Argh, such sweet relief. Bliss! Returned to the bar, downed my drink in 2 swigs and was about to set off again. The others would have finished by now. It was dark and the Landlady said 'be careful out there, there's a lot of crazy folk on tractors' as I headed out the pub.
It was real dark. I had no suitable lights on my bike and no phone. Oh well, only a few miles left to go. I had a knog light on the front which Chris had given me. This knog light was a single LED but provided just enough light for me to see about 1/2 a foot ahead and so miss any potential menace pot holes. I ate my last cereal bar plus an energy gel and raced all the way to the finish!
Got to the finish, yay, had reached John O' Groats! The voices in my head were bigging me up big time and congratulating me for not only completing my 2nd LEJOG challenge in 9 days, but completing said challenge with the addition of the Southernmost and Northernmost points of mainland Britain. Woo hoo! Job done! Took pictures of my bike against the John O' Groats sign post (fingers to the sign were missing) but couldn't take a picture of myself here because there was no one around. 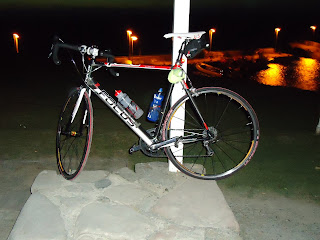 What the Dickens?! Where was everyone? I cycled to a nearby pub, no one around. Cycled back to John O' Groats, no one around. Eventually, I found the campsite and the missing cyclists! Great! Congratulated everbody, cheered, smiled and repeated the woo hoo, job done lines!

What followed then was celebrations in a nearby pub. We celebrated with a few drinks and much pizza and chips (whilst watching a disgusting program on T.V about folk who had major nasty mishaps whilst cycling). A pat on the back to all before we retired and spent a nice last night together in a tent in one of the windiest places in the whole World looking out at the North Sea.
Morning came and I took a walk with Chris to the obligatory sign post again and took pictures of myself and bike in the light. Pleased challenge is over but will remember this adventure for a long time. Thanks be to God for keeping me safe, and thanks to all my fellow cyclists for being a part in one truly amazing adventure. And, many thanks to all those who believed in us, supported us and sponsored our charity. 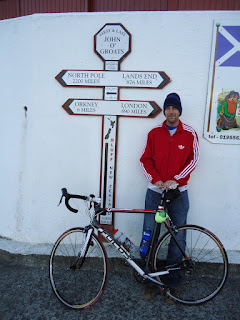 http://www.justgiving.com/le-jog-2010/
Cycled a distance of 145.70 miles, with a maximum speed of 46 mph.
Total weekly mileage was 707 miles.
Total Land's End to John O' Groats distance (including Sothernmost and Northernmost points of mainland Britain) was 959.26 miles!
Not sure as to what happens next, or what challenge lays ahead. Hope to provide further stats in my next blog entry with details of fundraising and maybe a testimonial. Unable to cycle anymore as the dude below has stolen my bicycle.... 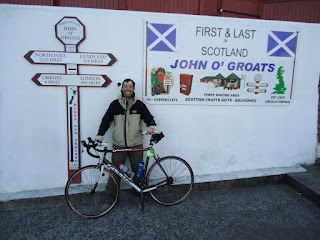