LEJOG day 8 In to Inverness

Woke up this morning in the grotty Youth Hostel at Glencoe. Awoke several times during the night as Chris and I were sharing a room with a bunch of folk who snored and made animal noises in their sleep. Our fellow cyclists were all sharing a different room. At least the food we had last night was ok - a pasta bolognese again. Porridge this morning was a bit different to say the least - this porridge could be chobbled! After washing dishes and getting bikes ready we were ready to go. Only a few thousand midges, and Ben A's sickness got in the way of a near perfect start. The day was hot and bright already.
Our first trek started off great, a neat descent from the beginning. Dave, Chris and I were feeling quite energetic at the start and we shot off from the rest of the group and cycled at a zoomy pace, each taking turns at the front whilst the other 2 slip-streamed. After we stopped for a toilet break, the others caught up and we continued along as a group. We passed Ben Nevis and finally stopped at a Commando memorial, where I remembered stopping during LEJOG 2009.
There was no sarnies at this stop. Hannah had made lots of pasta and tuna instead. I dislike pasta (despite eating so much this trip) and really missed the sarnies. I covered my pasta in mayo to try and disguise the fact it was pasta. The voices were telling me 'pasta will make ya go faster'.


After fuelling up and stretching we were off again. The scenery was again fantastic, the enormity of what I have seen is difficult to put into words. We found Loch Ness and cycled alongside it for a wee while. Being a good bunch of folk, we stopped and helped this French couple who were having troubles with a broken down car. Some thought it was clutch or handbrake problems, the voices told me it was a 'dodgey solanoid'. I think the couple made a call to the hire company or something. Before too long we were off again. I remember following Steve for a while and witnessed his water bottle eject from it's holder and land in a big fat dirty puddle. Steve reclaimed his bottle and now has some classic dirty hand prints on his jersey! Cycling continued and it seemed like quite a while before we reached the lunch stop.
The lunch stop was nice. We were near a corner shop. The voices commanded me to buy a sausage roll, twix bar and mini milk ice cream - the first 'real' food that I have had in days! Mmm delicious! This food was followed by tuna pasta, fruit and flap jacks courtesy of Hannah.

Took the next section at a more leisurely pace with Chris. We admired the awesome scenery. Passed Urquhart Castle and stopped to take pictures. Met the rest of the group at the next stop.


This next stop was in a car park, where again I remembered stopping during LEJOG 2009. No sarnies or nasty pasta was available here, so I fuelled up using an energy gel instead. I remembered a big steep climb followed this stop last year. 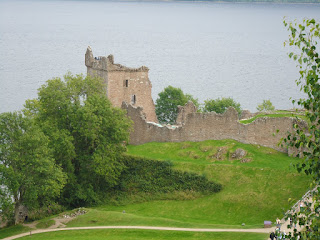 The big steep climb never happened, we took a different route. Instead, I led out another splinter group. Nathan, Ben and I took turns at leading this new trio and we raced at quite a pace. Nathan's lead out was super fast and we were reaching speeds of 25 mph plus. We waited towards the end and all re-grouped. A few wrong turns were taken, and a few locals were consulted before we found our way to the end point.
Our finish was the Inverness Youth Hostel. This hostel was way better than last night's. We have a cleaner place to stay with working showers (this really grabbed my goat yesterday). I am sharing a room with fellow cyclists today (Nathan and Ben are sharing with random other folk).
Hannah cooked up an awesome meal tonight. We ate an African dish called 'Bunny Chow', which is basically a curry stuffed into a half load of bread. Absolutely delicious! Following dinner, I washed up and Chris dried - this task proved a little difficult as the cycling induced madness had taken affect again and we were reduced to giggling idiots. Such funny times.
Tomorrow is our last day. We have something like 120 miles still to cover and have to get up around 6 a.m. I am still hoping to cycle to Dunnet Head, the Northernmost point of mainland Britain. Am not sure if anyone is brave (mad?) enough to join me on this venture, only time will tell. With this closing words, I retire for the night.