End of another week

My final training ride for last week was a single-speed MTB jolly. I was hoping to ride another 200k audax (The ‘Marlborough Connection 200’) with Chris Hodge, but the Southern Fairies had wreaked havoc with the weather and Chris was suffering with his ‘hydrophobia’ again, so this ride didn’t happen. I could have cycled that audax alone but by then I had lost my mojo.

My final ride was fun all the same even though certain tragedy happened. I had decided to take ‘Queenie’, my single-speed MTB out for a blast. The route I took is presented below: 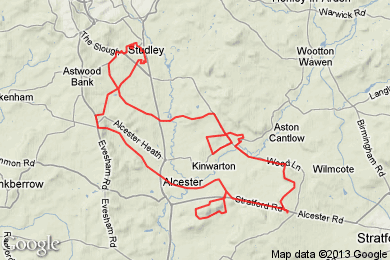 Whilst I was following familiar paths across ‘naughty fields’, the back wheel suddenly locked tight and threw me off. It took me a while to find out what was wrong – the rear disc brakes was preventing the wheel from moving and it looked like the spring was jammed. Even though I was only 7k from home, I didn’t fancy walking back so I pulled (removed) the said spring but that didn’t work. It transpired that one of the 2 bolts holding the disc brake ‘thing’ to the frame had gone AWOL. I re-positioned the disc brake ‘thing’ and continued on my journey deciding not to use the rear brake. (Am not sure of the real damage or repairability of this issue).

Still wanting to cycle further (originally had plans of cycling a hilly 50k, my mojo was still absent) I continued on to the ‘Breadcrumb Trail’ and cycled a lap of that. Quite difficult with no rear brake. Following this, I cycled up towards ‘Stag Hill’ and was overtaken by 2 younger road cyclists. I could see that they had slowed right down once the hill was encountered and so raced them up the hill and beat them both to the summit. I then re-traced my path to the beginning (end) of the bridleway that leads through the woods on the left.

I forget what these woods are called, but Ron (and possibly John V) and I have cycled through them before. More often than not, the track is very wet and muddy. This time around it was mostly ok, but still a little quagmire-like in places. On one stretch it was real mean and I came clean off the bike and landed in some terrible thorns which cut through my jacket. Grr.

Once out of these woods, I continued home via Great Alne and Coughton, using as many off-road tracks that I could find. I completed my return to Studley by cycling through Jill Lane (just to be different). Despite having a damaged bike and damaged jacket, I had a whole lot of fun. Perhaps none of this would have happened if I cycled the Mrlborough Connection 200…

Managed to cycle 456k this week. Was pleased as that was 56k over my LEL training target (despite wanting to cycle 600k). My yearly distance to date now stands at 3,880k.

Oh, I would like to end this blog with a big, big thanks to all those who have sponsored me so early on. My friends are family, you are so generous and it means so much to me. At least 2 of you have donated over £50 (one a whopping £100) and that will make such a difference to people’s lives that the Christadelphian Meal-a-Day Fund is supporting. Thank you!
at May 14, 2013