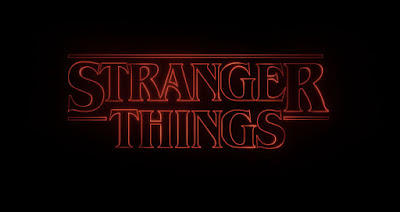 ''They got a ranch they call number fifty-one, they got a ranch they call number fifty-one!
Can't see it all 'less your flying by, just sitting there square, baking in the sun, beneath the sky.
They're gonna put it down, right on the strip, they're gonna put it down, on the Vegas strip,
they're gonna put it down, and step outside, into the lights, right outta that ship, saying Hi!
I was driving doing nothing on the shores of Great Salt Lake, when they put it on the air I put it in the hammer lane, I soon forgot myself and I forgot about the brake, I forgot all laws and I forgot about the rain, they were talking on the 9 and all across the amy band, across the road they were turning around and headed south with me, it got so crowded on the road I started driving in the sand, my head was feeling scared but my heart was feeling free, the desert turned to mud it seems that everybody heard, everybody was remembering to forget they had the chills, then I heard the voices on a broadcast from up on the bird, they were getting interviewed by some goodman whose name was Bill. I'm almost there to Vegas where they're puttin' on a show, they've come so far, I've lived this long, at least I must just go and say hello.'' (Pixies, Bossanova, The Happening)

The training week started great after what looked like menace. Awoke on Monday morning to a real heavy down pour, so decided not to cycle to my buddy Rogers, but left later and drove over. Once at Rogers, the rain had stopped and despite everywhere being cloudy, it was super warm. We took out Rogers recently serviced tandem for a relatively long ride. We first cycled to Redditch Prison and then on to Long Lartin Prison to create a 'jail break' kind of theme. We had a head wind going out, but that was fine as we were mostly descending. On the hillier return route we were being pushed by the wind. Lunch stop was at Hillers cafe which was ridiculously expensive and not overly substantial. The day was weird - it started cloudy and turned real dark before lunch and looked like heavy rain was going to pour but it didn't. A red orange sun was in the sky, super bright, and looked more bright and orange than the pumpkins located outside all the shops we passed. SJ later informed that the sun was orange due to dust being picked up from the Sahara Dessert. Anyways, after lunch, the darkness turned to a brightness. The hills ahead were easy as the wind was now pushing us. We cycled past my home and back to Rogers via country lanes and much more hills. I've said it before, but I'll say it again 'Roger is amazing'. Roger is my only friend that is blind and my only friend in their 70's, yet he cycled 88.8k with me with no problem at all. Amazing!
Continued with my #runeveryday challenge. Run 16 was a cross country affair in super windy weather. Run 17 was a run into work. Each time I have ran to work my time has gotten slower and slower - what do you think that's telling us?! Ha! Run 17.5, (yes, 2 runs in the same day) was a menace. Run 17.5 was the outward bound run from a work commute (first out and back since starting this crazy challenge) and had me running back and forth because I left without my phone, ran a bit, remembered, and returned, ran more. This forgetfulness proved helpful as it saw me run some cross-country (where there be dragons) to try and save some time and find my car. Found my car and was told I'm not allowed to park here any more. Run 17.5 saw an end to my challenge too, as no further running took place his week. 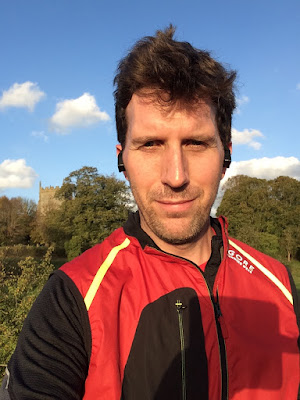 Midweek saw me complete another audax event (perm). This event was the 'Horseshoe Pass'. I initially thought I had cycled this pass before but am now thinking perhaps not.
The day started in a too familiar wonky style. I set off early doors to pick up my buddy Jamie and then had realised I had forgotten my cycling shoes. D'oh! After a quick trip home, we then ventured to Codsall to meet up with Avril and Phil for the start of our adventure.
The audax started fine with a relatively flat route leading to the first control in Wem. We stopped here for breakfast (chips, eggs and beans). After fuelling, we donned our rain jackets (as it had started to drizzle) and continued towards Welsh Wales.
The next stage of our adventure took us to the spectacular Horseshoe Pass. Real pretty scenery and some seriously tough climbs. Phil and I had left Jamie and Avril at the climbs so we could climb to the summit at a faster pace. Breath taking views. 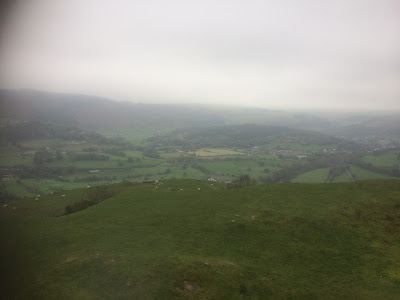 After the summit followed a ring-twitching descent where I had to negotiate my way past 2 sheep and a mountain biker! At the bottom, I faced signs to the Horseshoe Pass and Phil informed another ascent had to be climbed. 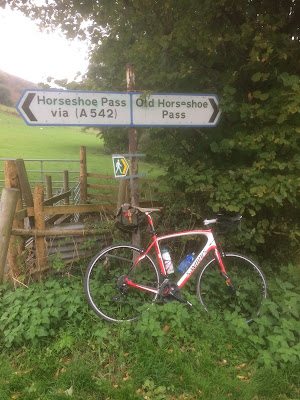 This second major climb was seriously more hilly than the first. Awesome climbing led to the summit where the visibility just disappeared and we were in rain, mist and drizzle. Luckily the cafe at the top was still open (we had made it with like 10 mins to spare). Phil and I had a little feast, collected stickers (proof of passage) and waited for Jamie, then Avril, to rock up. 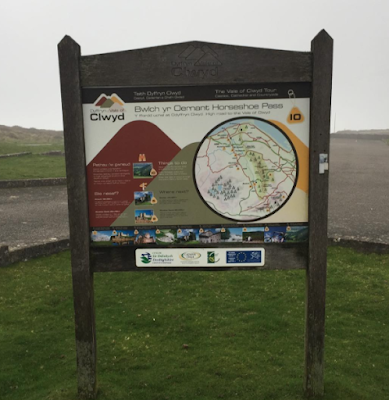 Descending the Horseshoe Pass was super zoomy and it felt great to be cycling. This was a long stretch and we stuck together initially, however, soon Phil and I were cycling as a pair and it had gotten darker. The more we cycled, the faster Phil seemed to get. We got to Shrewsbury control and neither of us were feeling hungry. I checked the time and man, it was later than I thought. Figured I should phone my Mrs and let Jamie know I was gonna speed on but my phone had died. Phil was happy to wait for the others, so off I left on a solo mission.

Next control was only about 20k away. Navigating was a little tricky as I didn't bring a helmet light and reading my Garmin proved a little menace. Once in Ironbridge I struggled to find an ATM, so stopped at a pub and brought a drink for receipt purposes.

Last stage took me back to the control in Codsall. Started to feel quite whacked before the finish appeared and felt quite pleased when ride was completed. Oh man, how am I gonna cope with cycling these distances (and more) everyday for 12 days when I cycle around Ireland next year?!