This week saw me complete much running and much cycling. The RonHill #RunEveryDay challenge ensured running was regular. A couple of commutes to work and back plus the CrossDuroPennines (#XDP17) race made for a great weeks cycling. Even had a couple of nights camping for good measure. 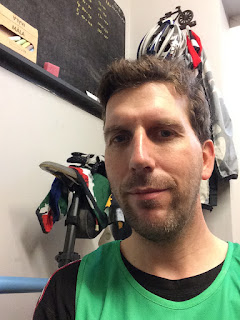 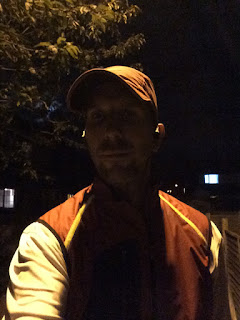 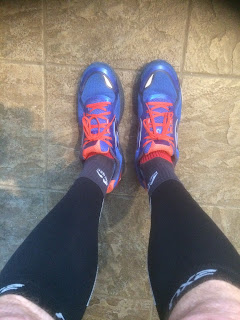 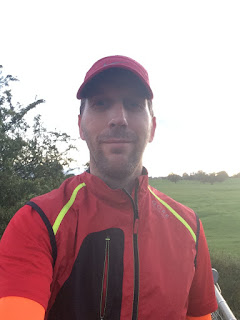 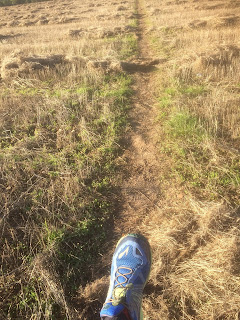 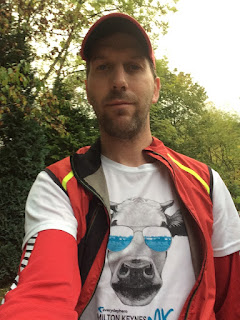 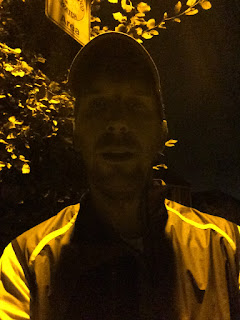 My commutes were regular, run of the mill affairs. Usually cold dark mornings followed by warmer lighter evenings. My commutes were at the beginning of the week because I wanted to save my legs for the #XDP17.

Left for the Pennines on Friday to ensure I could camp near the start for #XDP17. Hastily got all my gear together - took me a while to find my tent as my Mrs had re-homed it. Made sure bike was cleaned and Lin had kindly equipped Winter Chanel no. 7 (i.e. My bike) with some new 28 mm Vittoria Rubino tyres with graphine plus slime tubes. These tyres looked thinner than my previous 28mm  Panaracer Gravel Kings but was happy to test them out and hoped their puncture resistance would be better. Most folk will probably use suggested 35mm tyres but 28mm is the max I can fit. 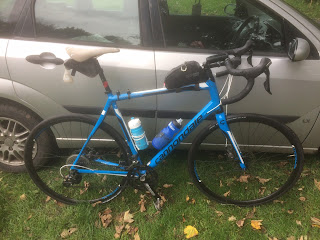 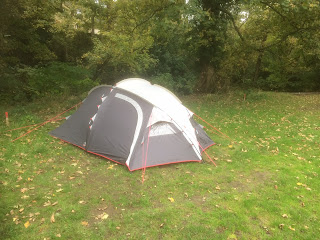 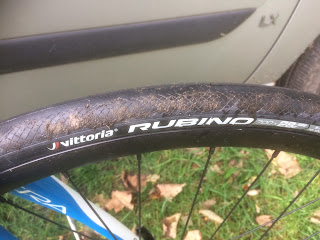 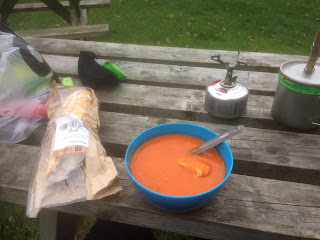 Made it to the Pennines just fine. Camped out at Holme Valley Camping and Caravan Park. The park was ok but the ground was soggy, too many creepy crawlies about and took ages to get there. Should have checked my kit prior to getting here - I didn't and had to eat soup out of my titanium mug that was covered in rust at the bottom (was housing a rusty gas cylinder - had covered it in a plastic bag but rust had eaten through it). Eat my rust - I did! Took a quick spin to the #XDP17 start, less than 10k away, perfect. Noticed I was in, or at least very near to, Kirklees. Kirklees was the only spur I missed when I cycled the Trans-Pennine Way a short while back. Bonus. 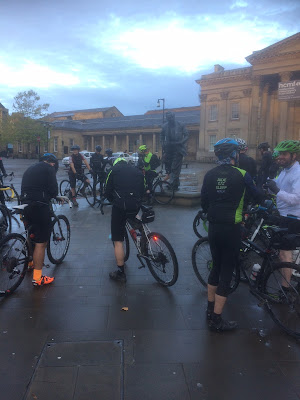 For those wondering what the #XDP17 is, the website describes as thus: CrossduroPennines #XDP17 is a challenging 170km mixed on and off road loop of the Calderdale and Dark Peak areas taking in some of the finest climbs in England.  The route is made up of sections of the Trans Pennine and Pennine Bridleway, two Tour de France climbs and numerous local trails combining to a hearty 3,000m (plus) of climbing. The above sounded great, but my experience was not so awesome if truth be told. I was mostly under prepared for this challenge. I had checked the weather and the forecast promised a dry day. However, it was wet from the start and cold and windy. When I arrived at the start, I stood out like a sore thumb. My bike was the only one with skinny tyres. About 20 folk had met at the start all with awesome looking machines with fat tyres and curved forks. A serious lot of bling. No matter I told myself, the bike I was using completed TNR. Anyways, after a quick brief, we were off. 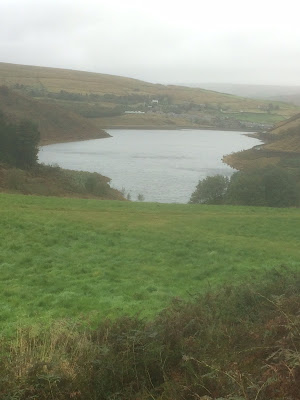 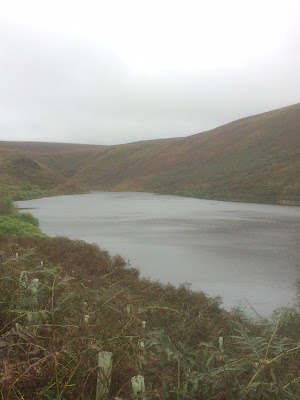 The race set off fast and I was soon at the back of the pack. We started on a bit of road which quickly turned to tow-path that was seriously bumpy and very wet. Within minutes I was caked in mud and my chain set was making awful sounds. After about 5k I was cycling alone. No bother I told myself, I'd ride my own ride. Before long, I was cycling some rocky single track, cobbles, gravel sections and big wet slabbed sections where hike-a-bike was the only option. The views were breathtaking. This race I had started consisted of 5 Strava segments and un-known to me (until after the race) I raced up the first segment which was a 3.5 mile, 844 feet climb - with mixed terrain including road, steep cobbles and reservoir supply road. Little kudos for me, I hiked the serious cobbled bits. My Garmin was not informing me when the sections came (despite me having the sections enabled). 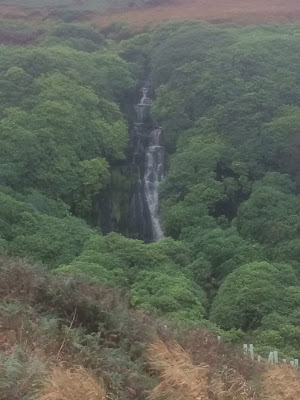 The second segment looked familiar, it was a 4.7 mile, 888 feet up and over road climb of a Holme Moss with a tricky off road start (that had me on my feet, deep loose gravel - this off road was actually closed). The climb was tough as the rain was belting down, the wind pushing me to the side and my fingers were numb. My Garmin had gone onto locked screen mode too which was annoying. Once on the descent, things were no better. It was too wet and windy to race down. Also my brakes were pants and causing me the fear. The brakeset I have gets rave reviews, however, I must have a dud set - these brakes have never worked great and in the wet they were now even worse. 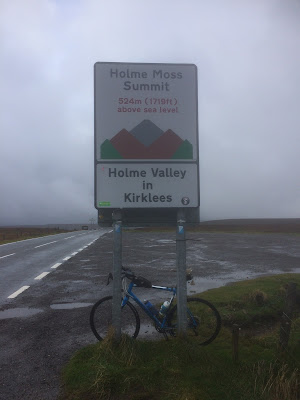 So under prepared was I, that my fingers were starting to get real cold. I figured I'd continue anyhow. Continue I did cycling off road tracks. These tracks were super fast when descending and my brakes just didn't help with my control. I flew down a stepped section and bang! There went the front tyre. Snakes and spiders! Never expected my tyres (tubes) to pop. It was a cold lengthy repair swapping the tube and then I realised how unprepared (and stupid) I had been. The replaced tube was the only spare I had taken and I had no patches on me. Sure, I expected my new tyres and tubes to be indestructible but I should have taken precautions all the same. I decided to abandon here. 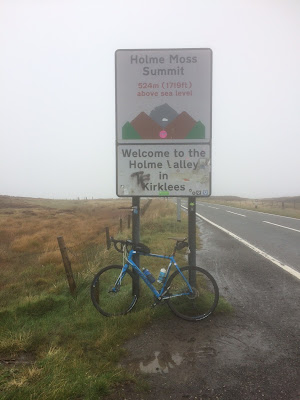 Getting back to the campsite was only like 15k or so away, however, it meant I had to climb back up Holme Moss summit. Two climbs of this summit (from both sides) in one day. Tough climbing from either side but at least I tasted some hills.

Took pictures at the top from both sides, had definitely gotten brighter (but I thought bleaker) as the day wore on. Another scary descent and a wet, muddy miserable cycle to the finish, well my finish anyway. 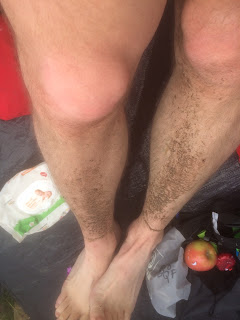 Was a trifle disappointed to DNF, however, if I'd have continued and punctured - I could have been stranded in the dark, been cold and wet and who knows, maybe even eaten by wolves. I had a challenging ride and saw a beautiful rainbow (not to mention the awesome scenery). I was safe and well and injury free. The website informed I had missed out on the following:
All in all a great week. One challenge beat me. One challenge continues....
at October 08, 2017