The tail end of the week went down hill. Not down hill on a mountain bike, just down hill. The specialised had 'popped her tubes', the computer on my road bike 'said no' (but the bike did manage a trip to work), John had to pull out of the audax and I got fever.

Carmel (better known as 'Caramel') took a motherly role and prevented me from running around Ladywood reservoir with my fever. So, I resorted to 'exercise by proxy' where I visited other folks blog sites and read about their training and using transference directly benefitted from their efforts. Ron had been using his new secret weapon - a pair of rollers, Andy had been training hard for the audax and used a taxi on his return leg of a 55 miler and Si (another fellow LEJOGer) had done some magic and is now coming along to do the audax too.
Work has a habit of getting in the way of fun. With this in mind, I am taking next week off and plan to take it easy. Hopefully Scotty and I will have a few outings to comment about. 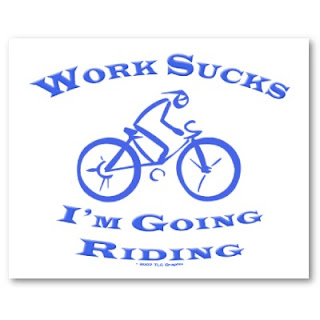 'I had some christmas cards with a brussel sprout on. His name was Ian, which I thought was nice'.*
Weekly totals: Swam for 45 mins; Cycled 71 miles; Ran for 40 mins; Skipped for 4 mins.
*Title and quote courtesy of my friend Sarah G.
at January 24, 2010