I left my house in the morning, not fully awake. Just before I reached the start, I remembered I had forgotten to bring my water bottles. Oh no, this was a major mistake as today was going to be very hot, and I woiulb be cycling more than 190 miles. The voices in my head told me not to panic. A local garage sold bottled water, and this would have to suffice. At the start were about 24 more cyclists. The event organiser handed out a bottle of lucozade to each participant, which was nice. After a brief briefing we were off. 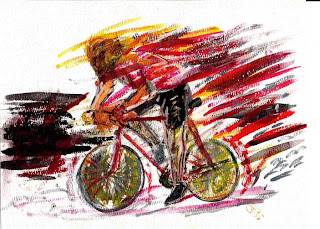 Stage 1 took us from the start in Tewkesbury to Warwick services. Within the first mile, my bottle of lucozade ejected itself from the bottle holder and I was down to 1 bottle of fluid. This first stage was quite fast paced and we cycled as a big group (like a Tour de France peleton) and passed through places already familiar to me including Pershore, Pinvin, Inkberrow and Sambourne. Just after Pinvin we had to cross a ford - a cyclist in front of me attempted this and came clean off his bike and got suitably soaked. The rest of us decided to take the foot bridge option. Suprisingly and super for me, the route passed through Studley village, my 'home town'. I took a quick detour, went home and collected my forgotten water bottles. Yay! Happy days. I then raced to catch the group again, doing so near Hampton Lucy. We passed through Wellesbourne and finally reached the Warwick services. This control was at the 50 mile mark, quite a trek I thought, on shorter distance audax's the first control is around the 30 mile mark. This first control did not open till 9 a.m and we got here at that time - super zoomy. I treated myself to 2 Burger King breakfast baps here.

Stage 2 was pretty fast paced again, but the group was heavily broken up now. I teamed up with 2 other guys and we chuckled as we passed certain place names like Wormleighton and Fenny Compton. The scenery here was awesome and some of the roads reminded me of France as they were long and mostly traffic free. A suitably long hill had to be climbed during this stage before reaching Radway and passing on through Tysoe, Sibford Gower and finally reaching the control in Chipping Norton. I ate beans on toast here and it felt good that 100 miles had been eaten up already.
More hills to negotiate in stage 3. Although there was hills, there were super descents too. For the most part this was a solo stage for me and I passed through Foscot alone, only meeting others just before the control in Cirencester. At this control I fuelled up on pork pies.
Stage 4 was interesting. I experienced highs and lows here. We cycled as a team of 4, taking turns at pulling the group and then slipstreaming. I was at the back taking advantage of this as I started to feel real pooped, before I found some energy to help out. There were times when I was overtaken with extreme tiredness and kept yawning, wanting to stop. The voices were telling me to continue, and continue we did. It was during this section that I reached another milestone - I had cycled over 135 miles, this is the furthest I have ever cycled in any 1 day before. We struggled past Great Somerford, Upper Seagry and finally reached the control at Leigh de la Mere. I ate a sausage bap here and took a bit of time to rest. I think others may of noticed me struggle a wee bit as a certain cyclist came over and gave me an energy bar and gel and another gave me a bottle of water.
Stage 5 was awesome. I don't know whether it was the rest, the food, or the energy bar/gel but I had new legs here and felt great again. There was big climbs as we passed through Norton, Easton Grey, Tetbury and Cherington but these proved no major problem. There was also one awesome super zoomy lenghty descent which brought us down to Staverton - so zoomy in fact, I nearly reached 45 mph. It was great to reach the finish in Tewkesbury. The event organiser said I had a really good time (I finished at 8.50 p.m), especially considering this was my first 300k, which was nice.
I cycled a distance of 191.12 miles, with an average speed of 15 mph and a max speed of 44.5 mph.
Weekly totals: Cycled 239 miles.
at July 11, 2010