Not sure what really happened the past couple of weeks but it wasn't great. Decided I would focus harder this week and get back into things. Tolls syndrome was still hanging about and my head space was filled with a little disappointment following my Isoman DNS. So much so, Monday was another missed opportunity where no exercise at all took place. However, I did cut down much bush from the front of my yard which mentally made me feel a trifle better. 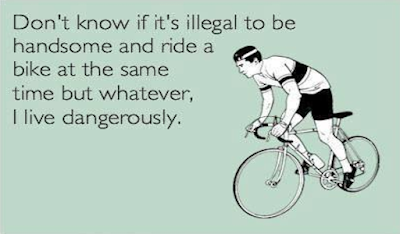 Tuesday was a much better day. Not only did I get back on my single-speed road bike and cycle a short 17 mile circuit, I also ran straight after doing so. My run was real short, just over a mile. I think they call this sort of phenomena a 'brick'. Later in the day, I went for a jog with SJ. Yup, you heard me right - SJ and I ran a mini Studley triangle. I reckon that was the first time SJ had ran for like 2 years or more. Let's hope she doesn't leave it another couple of years until the next outing. 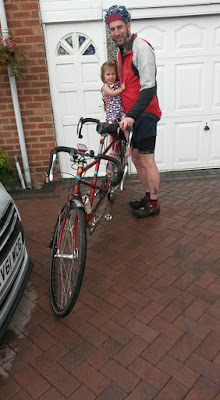 Wednesday was another great day. I hooked up with my buddy Roger and we took The Beast out for a blast. We cycled (fairly) familiar roads to the back of Ragley Hall and then stopped at a cafe for some delicious beans and egg on toast. We washed this food down with a mug of tea. Back on the tandem we cycled through Alcester and then stopped at my gaffe to meet my family. It was great introducing Roger to SJ, Melody and Lunar. Lunar loved the tandem and even took a shot on the back saddle. Lunar had never seen such a strange looking bike before. 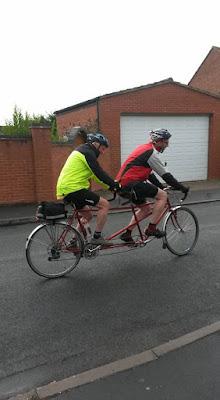 Roger and I didn't cycle far once we left Doo Little (my abode). We spotted my parents at their dwelling just around the corner. Would have been rude not to stop and have a natter. 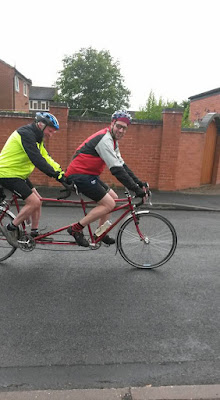 Final push was essentially a trip along my commute route. How strange it felt to cycle through Arrow Valley Park on a tandem. Of course, we didn't cycle to work, we cycled back to Rogers. Great day out in mixed weather. We covered just over 70k and I'm already looking forward to our next adventure. 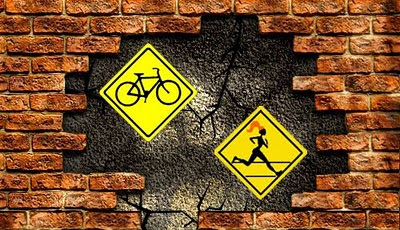 Thursday was another brick session. A 20k cycle followed by a 5k run. Strangely, my legs didn't feel so weird during the transition. Maybe brick sessions are the way forward?! 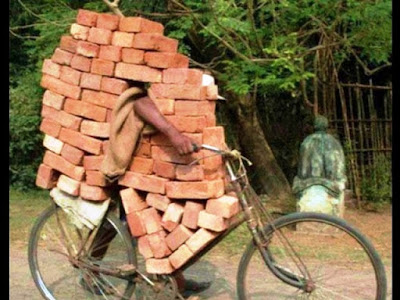 Friday was a rest day. Of sorts. SJ's sister got married on this day. How awesome!
Saturday was the day I completed my long run. This long run was a half-marathon. A half-marathon, just for fun. Ouch, I ached big time afterwards!
Whilst uploading my long-run route on Strava, I could see someone had sent me a message. Low and behold it was Terry, who sent the lovely following words:

''Yo Doo ! I was just mooching around web and stumbled across your signature on LEL video trailer -  made me laugh and chuckle a bit. You are a star and source of inspiration.... I'm looking forward to seeing your face on my living room TV in next month or two when my LEL DVD arrives.   Ride safe my owd matey -  hope to see you again soon.  Terry from Bury....''

Kind words indeed. Terry really is a legend! To quote myself, I wrote the following words about him during my LEL adventure back in 2013:

Another awesome part of this stage was that I was cycling large portions with Terry. Terry was a real nice guy and I had passed him at the start in Loughton (we just exchanged a friendly 'hi' there) and caught him again at a control but was unable to chat as I was on the phone. Anyways, during this stage we chatted loads. Terry said he felt some strange emotion when he saw me and believed I helped him get through the Holl and Back 600k event. If truth be known, it was Terry who helped me get through said 600k event - he proved to be both a navigator and inspirer. I enjoyed Terry's company a lot - he likes real things in life and appreciates stunning scenery and has this great ability of spotting many a folly (well, it was an old bridge on this occasion). Terry likes to tour whilst cycling and his love of what he sees is very admirable. God's creation is truly awesome. In retrospect, this was probably my favourite part of the LEL adventure.

Sunday was a day of rest - like it should be! My legs were too whacked to do anything really. Am pleased I got my mojo back and hope next week will be as great as this.
at July 26, 2015 No comments:

Last week I commented that I had done little on the training front and that I was lacking motivation and energy. My friend Jamie remarked 'it sounds like you've caught 'Tolls Syndrome'. Toll, is (was, ha!) a friend of ours who I reckon Jamie was having a friendly dig at. How confused was I when my wife butted in and said 'I had to look that up [Tolls Syndrome]... and yep I think he [me] has'! This caused for some research of my own.

Tolls Syndrome is also known as 'burn-out syndrome'. Some of the signs include long hours at work, unhealthy habits, irregular behaviour, psychological symptoms, a general feeling of being overwhelmed and feeling like your life is devoid of purpose'. Hmm, I tick at least four of those listed options (won't spell out which ones).

Whether I had Tolls Syndrome last week, I can't be sure. However, there was evidence I had it this week! I had at least 2 shifts that were over 12 hours long. Ate unhealthily. Wont comment on my behaviour. Held a belief that I was poisoned. I really was unwell and felt that I was 'tripping out' at times. Could well have been poisoned. Paranoid, maybe - but there was an evidence base to my thinking. To top that, I'm sure my work colleagues will testify how professional I am and how I try so hard to look after them (okay, may depend which colleagues you ask but hey...) Truth is, I did no exercise at all this week and am looking for a feasible excuse!

I would so very much like to complete an IronMan event one time. I guess my weight and lack of experience are the biggest stumbling blocks in my way at the present time. One day I hope to compete in same. Meanwhile, I will continue training (for my upcoming triathlon and marathon events) and take inspiration from a couple of my hero's (pictured below). 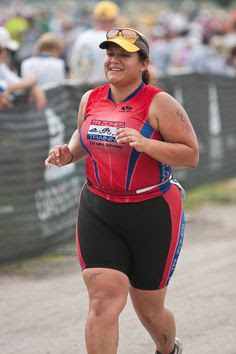 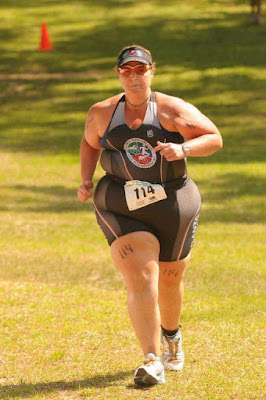 Monday. Started the week by doing what I do best - nothing! Felt some-what demotivated today and despite my head wanting me to run, my legs and the rest of my body just said 'no'!

Tuesday. A better day. Again my legs wouldn't allow me to run or cycle to work. However, once home, my head and body in partnership felt an open water swim would be a great idea. Better yet, my wife SJ, daughters and father came along to spectate.
I managed to swim 3 x 750m laps around the lake which was my goal. My father gave me constructive criticism and told me that, essentially, my arms were flapping like a big bird. SJ was more helpful and gave me cues on how to improve my swim. My second lap was better, I kept my arms closer to my head. SJ gave further instruction and told me that I needed to bend my arms more (elbows higher than wrists). My third and final lap was much better again (though far from perfect). Was helpful having SJ there in the capacity as coach and I hope she'll come along again. Was great having my daughters (and dad) there too, even if Lunar did cry every time I got into the water.
Wednesday: Easy run. I ran the Studley Triangle which I have ran lots of times but not for a while. Should find/create a local 10k run really...
Thursday: 10k run, interval style. I followed the formula 10 mins warm up; 3 x 1600m run (with 3 mins recovery); cool down to finish. Quite bizarrely, I followed in the shadow of another runner all the way from Kings Norton into Town. Every time I neared this runner he'd put down the gas. I never quite caught him.

Friday: Bike commute to work and back. Perfect weather. Shame not all the folk I work with are shiny, happy people. 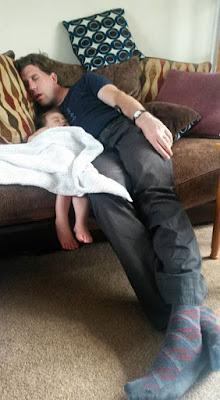 Sunday: Not a thing. Too tired to open water swim in the morning. In the afternoon, the Wimbledon final was on, my wife and kids were home, the weather was pants... Really struggled with motivation again. Voices in my head said 'don't do it'. Maybe this rest will bode well for my Isoman triathlon planned for next week. I do hope so....
at July 12, 2015 No comments:

Monday: First cycle in ages with my buddy Ron. We just cycled along nearby lanes and essentially 'caught up' with each others happenings. Not long until Ron (and Jamie and Andy) starts his PBP adventure.
Tuesday: A wonderfully hot day and how awesome to open water swim in Ragley Lake. Managed 3 x 750m laps. Was great to have my mum and Aunty Christine come and spectate too.
Wednesday: I think this was the hottest day of the year thus far. I ventured out on my long run quite early in the morning and essentially ran to Alcester and back. My run consisted of both road and off-road sections. Ran places I had not ran before and saw several signs relating to the Heart of England Forest (presume I will run some of this route during my planned marathon later in the year). This run hurt and I had another emergency on route (3rd in 3 weeks). Cooled off later in day by dipping my legs into a cool pool.
Thursday: Rest day. Well, that's if you can call a day spent entertaining the Health Minister Alistair Burt 'rest'! Ha!

Sunday: Open water swim at Ragley Lake. Managed 3 x 750m laps. Should have gone to tri-club but the Tour de France was on, I was tired....