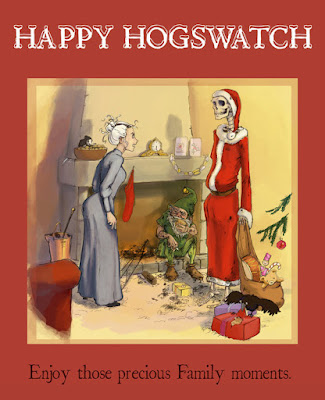 Monday: Today, Tim Tom's TomTom test ticker terminated! Not sure what happened exactly but I was paying close attention to the TomTom watch I was testing and all of a sudden - wipe out! I had ran 8.8k and then the watch just reset itself without recording any of the data. Such menace! Thankfully, I was running my regular tow path commute into work, so I knew how far I had ran and in what time. I ran 10k (in about an hour), interval style, with no real proof of same. Pah!

Wednesday: Run commute into work. 10k. Last run this side of Xmas.

Thursday: Christmas Eve. Started my Rapha 500 festive challenge and cycled a 75km jolly. Only another 425k to go... 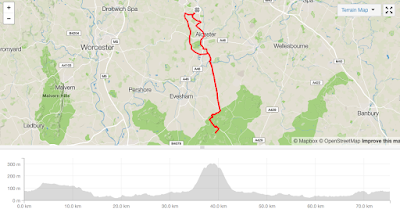 This was a lovely cycle that took me up to Broadway Tower and back. Side wind on the way out. A tail wind seemed to push me up Fish Hill (didn't have to use granny gear) and back home. Perfect.

Friday: Hogswatch 2015 no less. No cycling (or other exercise) activity took place. However, I got a lovely cycling t-shirt gift (cheers ma and pa), not to mention my new machine (cheers Lin). 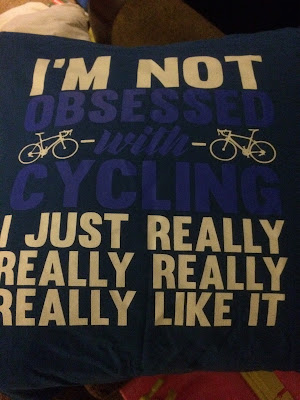 Saturday: Hogswatch over and back to work. Grr! Decided to cycle commute style there and back and incorporated the Licky Hills (both sides) for good measure. On my outbound leg, my front mudguard was rattling like crazy - on closer inspection I could see that the nut/bolt was missing from the right side front fork. Grr, menace! The guard is currently held together DIY style with some elastic bands. Such improvisation. Cycled about 90k and have completed a 1/4 of the Rapha challenge thus far. 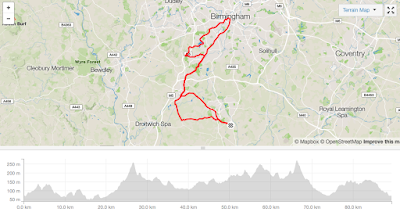 Sunday: Finished the week with another work and back cycle commute using my new winter bike. This was a strange adventure because I actually wasn't working today. Basically, I was returning the 'live' phone ready for Ed's shift. 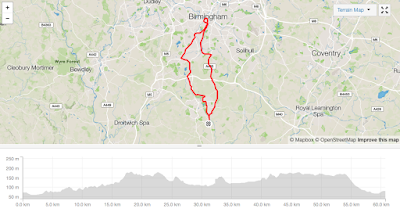 Sunday's adventure was about 60k in all on a quite wet and foggy day. Was nice to chip a few more km's off as my Rapha Festive 500 continued. Will I complete this challenge? - Guess we will all find out next week...
at December 27, 2015 No comments: 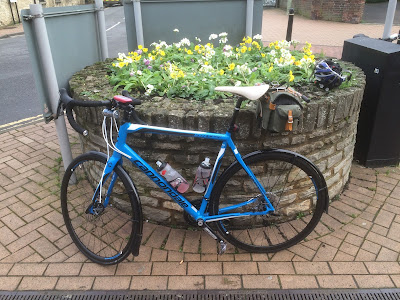 Awesome start to the week with the completion of my 112th audax to date. This was a 200k DIY Perm that I entitled the 'Winter CHRIStmas LINdt Route Menace'. This was also the first audax completed for the 2016 cycle season.
My route started in Studley at 7.01 a.m. This was my first long distance cycle on my new machine 'Winter Chanal no. 7' and she proved to be an awesome machine. My first control was in Bicester, about 80k from the start and one menace hill, about half way, was conquered before reaching the destination.
Before I could officially stop for 'breakfast in Bicester', I had to purchase a bicycle lock from a local bike shop. There was no way I was going to leave this new bike un-locked at any control. With security measures in place, I tucked into a full English. 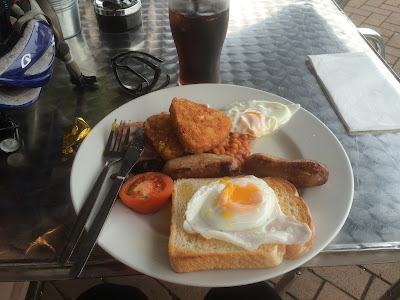 Witney was the next stop. I didn't stop to eat at any control as I was still stuffed from breakfast. The mud-guards that had previously rattled for so long and had now appeared to have rattled into place.

As expected, I suffered with hunger pangs before reaching the next control. McDonald's saved the day and emergency feast was had. Once in Eton Wick (Windsor), I stopped to ring my buddy Chris but he was still at work. No bother, a stop at a local store before my final push into Sunbury-on-Thames.

Last leg was relatively easy, despite it now being dark. The route was now rolling (had conquered 3 category 4 hill climbs earlier) and the rain had stopped. Most of the adventure was dry but sure enough the rain did put in an appearance. Found my way to Lin's with no real bother but had to scout about a little just to locate a shop for my final control purpose.

Cycled 224k in total. This adventure took me about 10.5 hours to complete and I was real pleased with my new machine. Can you all see how the title 'Winter CHRIStmas LINdt Route Menace' was conjured up?!

Tuesday was spent resting. I felt quite post-ride mash up. Surprised I felt so rough really, as Lin had gotten me recovery drinks prepared as soon as I rocked up. Better yet, I had another full English prepared by Lin to eat too!
Wednesday was a great day. I went swimming with Melanie (a friend of Lin's and now a friend of mine) and swam about 1,800m in an outdoor pool. I guess this is the closest I had got to open water swimming in some time. Kinda strange swimming in Winter months in an outside pool. It was not perfect - but pretty good!
Thursday was a run evening. I joined Melanie at her local running club - 'The Stragglers'. We ran interval style as part of a group for about 6k. This was a fun session and it started and finished with stretching. Once completed, the club kindly provided much mince pie's, sausage rolls and mulled wine. I definitely chose the right evening to run!
Friday was a super awesome day too. This was the day that I was officially introduced to my next 'new' bike. Lin had kindly gotten me a new time trial bike for Xmas. How cool was that?! Nice bit of kit indeed and Lin had personalised it for me too. I decided to name this time trial (TT) bike 'Tony's Theme' (TT). (Can you see what I did there?!) 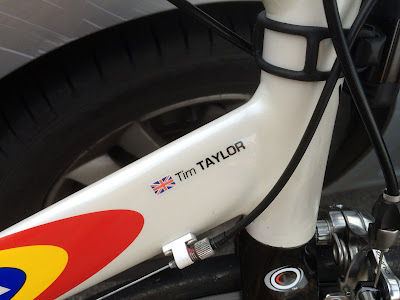 I had never cycled a TT bike before and thought this would take some getting used too. I wasn't wrong, it did feel very strange and handling was initially difficult. Lin took me to one of her local 6 mile time trial loops so I could have a debut ride.
After a couple of laps around the reservoir, Tony's Theme seemed to handle much better. She felt difficult to start with - a bit like Roger's tandem, but got easier after a time. Am sure I'm going to have some fun with this machine. Cheers Lin!

Struggled with motivation a little on Saturday. However, once I had given myself a talking to, I ran a hilly course. Just under 10k was covered and it was a nice pleasant run. Considering it was winter, the temperature was really mild. I think this must be one of the warmest winters ever.
Finished the week with a pool swim. Swam 2,250m in a not so crowded pool for a change. Quite pleased with this weeks training.
at December 20, 2015 No comments:

Started this week with a nice cycle commute to work and back. A nice round trip of 58k. Didn't use my new bike, my commute bike is for commuting! On the cycling side of things, I have signed up for the Rapha Festive 500 (again). This is a challenge that runs from Xmas eve to New Years eve where you have to cycle 500k within those 8 days. I won't go into detail regarding the abuse I received from family and friends for so doing! This will hopefully be my 3rd successful completion of challenge. 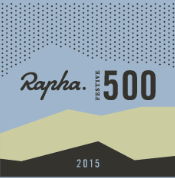 Wednesday was a mid-week menace day. Had planned to swim but paralysis of will and a headache put pay to that.

Thursday was another run commute into work. Ran 4k and my TomTom died (and have lost my TomTom test watch). Stomach problems forced me to take a loo break at Cannon Hill Park (Mac Centre). Pushed on until I reached work covering 10k in all.

Friday was a good day despite it not going to plan. Started with a 2,000m swim which was nice. Jonny Mitchum was swimming today too. We both swam about the same distance but John got out the pool about 25 minutes before me. Hmm. After my swim, I went for a cycle. Had hoped to cycle loads today but that didn't happen. I took 'Winter Chanal No. 7' - my new road bike, out for a quick spin to the cycle shop. At the shop I got chatting and one thing led to a bike fit, new fitted guards and a rather funky saddle. Conversation became IM orientated and hours later I was racing home to catch up with my wife and kids and had no time for more miles. However, I found time to take 'Kay O', my single-speed road bike to the self same bike shop. This bike has a seat post stuck in the frame which the bike shop guys are gonna have a go at releasing. They said they wanted a challenge... I do hope they have success.

Saturday was a wet miserable day. I managed a 10k run which I was pleased with, despite looking like a drowned rat. Barbara sent me a link to a blog which helped brighten my day. This was the link: here.

Sunday was a disappointing day. My plans to swim and cycle went down the pan. I had gotten myself excited about Zwift - a cycling program to help motivate whilst on the turbo trainer. Spent all day waiting for software to download and then spent 30 mins on the trainer. Really couldn't get my head around the program. Should have gone swimming instead. Grr! Have set Winter Chanal No. 7 up ready for a long ride tomorrow but something is rubbing at the front (not sure if it is wheel, mud guard or disc brake). Hmm, such menace! 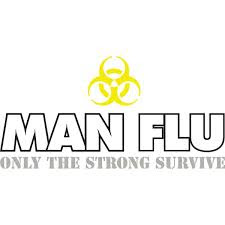 Week started well again. I kicked off with a 1,500m swim followed by 40 mins on the turbo trainer. I do like these dual sport days and have a positive, up-beat feeling when the week starts well. Today was also special because I attended my very first ever 'parents evening'. Am sure Lunar is well on her way to becoming a rocket scientist!

Tuesday was an ok day too. I took a run commute into work. Just over 10k in all/ 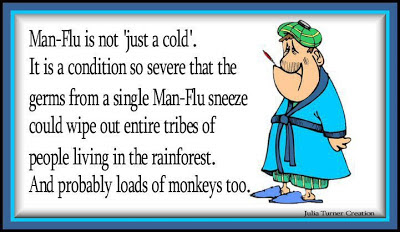 Mid-week menace. Just like the last couple of weeks, things went bad in the middle of the week. On this occasion I got a bad case of the man flu! 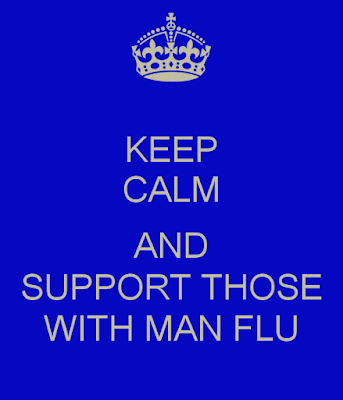 Don't panic! Keep calm! I survived the man flu and celebrated by cycling a 90k jolly on Saturday with my buddies Ron, John and Jamie. We all left Doo Little together and made our way towards Webheath. Once we hit Webheath we pretty much followed Roger's Fladbury-Crowle route. Super windy day, facing a 50 mph headwind pretty much all the way to the cafe. At the cafe we all had supersize breakfasts except Jonny - he had a super skinny affair. Return leg was more speedy with the super tail wind. Slowly folk dropped off - first Jonny, then Jamie. Only Ron and I made it back to Studley. Real nice social ride, look forward to riding with these fine gents sometime in the near future.
Once home, I parked up 'Kay O' my single-speed road bike and caught a lift to Town with my dad. In Town, I collected a new steed 'Winter'. What a lovely bike she was! Easy cycle back home. Am sure I'm going to have lots of adventure with Winter this Winter!
Sunday morning had to be spent taking Winter out for another ride. So, that's exactly what I did. Cycled about 28k on my new dream machine!

Training this week didn't quite go to plan. I swam very little and ran very little (only completed one of each of these activities). However, cycling fared much better! Very pleased with the adventures I had and my new steed is mighty fine indeed. Nearly 2 hours off my target training time too, oh well, it'll do, no point getting in a stew.