Oh man, finally managed to get the bike out after my last bout of man flu! After a week and a half of no exercise at all, I figured the CotsDURO 18 route would be just the ticket. I had hoped to cycle this the previous week with a group of friends and family but had to bail out due to 'the bugs'. This week, no friends or family were able to join me. I had cycled this route one time before but accidentally cycled it the wrong way around. What could possibly go wrong this time?!
It was very cold when I first set out but soon warmed up. The first 10k was quite a struggle and so much phlegm and snot was produced. Sadly, there was bike-a-hike section almost straight away. I like the idea of blaming illness, however, I think I would have struggled with some of these climbs anyway. 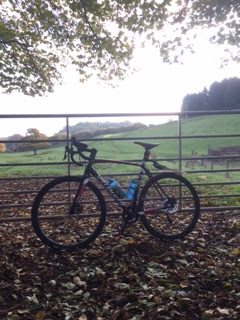 Lots of mixed terrain on this route and mostly off-road. As I was cycling up some single track I met a guy who was walking his dogs and flying his big bird of prey. That was pretty cool! 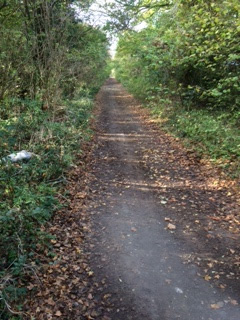 Wrongness happened at about the 35k mark. Psst! Both my tyres punctured - what a menace! Worse still, I had only 1 spare tube and no patches. (I would normally put slime in my tubes, however, being a new bike this was fitted with tubes that had valves which did not unscrew to add said slime). Thorns were the culprit for both tubes. I replaced the front one with my spare tube and scratched my chin what to do for the rear. I had little in the way of tools (no zip ties, no cutting tool - so no cutting the tube and tying) but did have some gaffa type which I thought would be worth a try. Yup, I gaffa taped the puncture and it worked just fine - for a bout 10 minutes... Bummer. I checked my phone and could see I was only 3k away from a bike shop in Malmesbury. I started the slow walk and was passed by 2 cyclists who asked if I was okay. They kindly donated me a tube (it was for a racing bike 23mm, my tyres were 33mm) which I fitted pronto and sped along to the bike shop. 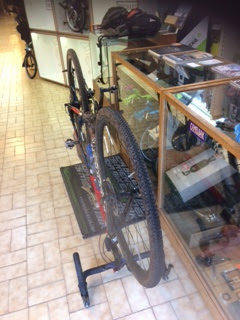 The donated tube worked just fine but I was paranoid that it might be over-stretched. The bike shop was able to sell me a couple of tubes and I replaced the donated tube. The new tubes I fitted had decent valves (so once home, filled tubes with slime) and the bike shop lent me their pump to blow up my tyres to a decent pressure. Yay, all fixed. 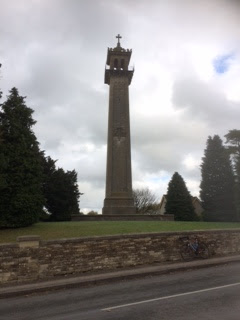 Continued my journey feeling confident I could fix any further potential punctures. I passed the above monument and wanted to take a closer look - but couldn't! This monument is private and is located in someone's garden with no access to the likes of you and I. 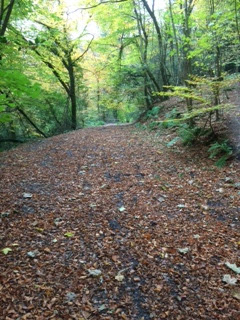 Continued along much single track and open fields before stopping to eat my lunch. The sheer rattley nature of this ride had caused a screw from my water bottle holder to go AWOL - no problem, the tape I was carrying came in use again. The tracks were way more muddy/soggy compared to my last trip and the bike would get heavier as the mud clogged. Once in the wooded parts however, the mud would shed and sometimes the fallen leaves were so red in colour that I though I was cycling on Mars. 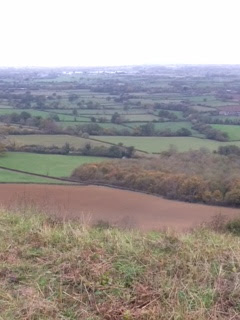 Some of the views, especially at height were spectacular. Just as well having cycled bike-a-hiked long sections to get there. So nice seeing patch-work fields and being away from motorised traffic. 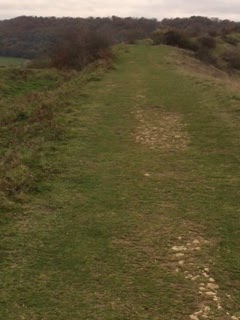 The route this way around (i.e. the correct way) was way better and easier than reverse way round. Either way, the route is tough. Not to be underestimated this one and regardless of how fit I might be, there would still be definite hike-a-bike sections. 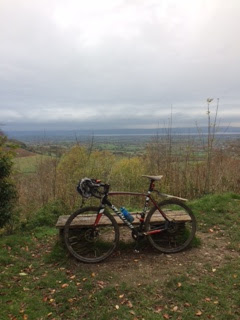 One of my favourite sections was the Uley Bury CW loop of Bury Fort. This was relatively easy, fast and felt wild. Just a menace having to open and close gates. 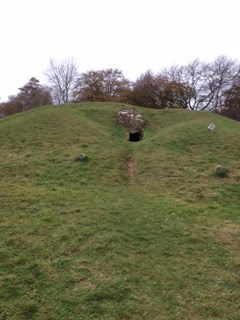 Made sure I stopped at Uley Long Barrow (aka Hetty Pegler's Tump) this time around. This is a partially reconstructed Neolithic chambered mound. Maybe I'll explore the chambers in more detail on another trip?

Leaving the mound and heading to the finish became a bit of a race against time. The light had started to fade and it wasn't long before it was real dark. It was great to be at height and see Stroud so lit up and the many fireworks were awesome too. What wasn't so awesome was the fact that I fell off my bike twice and cut up my legs. It was nice to finish after a final stretch of climb and off-road down hill littered with rocks.

All in all, a relatively great ride. I think this ride could be improved if some sections of bike-a-hike were removed. Maybe the whole experience would be better if I cycled this on the last Saturday in June (when the 'official' race takes place) as there'd be more light and the ground would be harder ensuring the bike rolled faster. Maybe a lighter bike and better gearing would help too. Pah, I'd ride it again, in any season, and on my commute bike - who's game?!
at November 04, 2018 No comments: