Bivy-A-Month (BAM) #2 was an interesting camp. Decided to coincide this camp with the 'Big Brummie Campout'. This campout was essentially a campaign launched by SIFA Fireside (a homeless charity) that focused on the importance of 'home' at a time when everybody was being forced to spend more time than usual on their own (due to C19 issues). The campaign suggested a donation to their charity as folk pitched a tent in the garden, built a DIY den on their balcony, created a cushion castle in their living room or whatever wild camping idea took their fancy. Great excuse for a bivy if you ask me...
My girls were keen on a back garden camp out. Our original plan was that just Lunar and I would camp and we figured we would use the 2 man tent. Melody, decided she wanted to camp too though, so out came my bivy. Plan B was that the girls would sleep together and I'd be on my own. 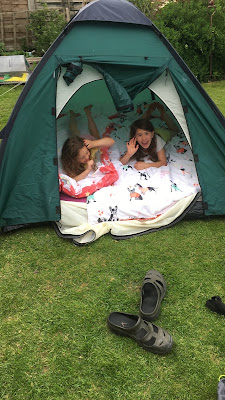 A couple of my mates with whom I often camp, decided to camp out this night too (and help support SIFA). Obviously they weren't in my garden. Through the wonders of WhatsApp, we still felt kinda connected and were able to share our camps.
When night time came, my girls and I reverted back to plan A. Lunar and I would sleep in the tent and Melody would look after her mum indoors. It was a lovely warm night and after so long we all dropped off to sleep. 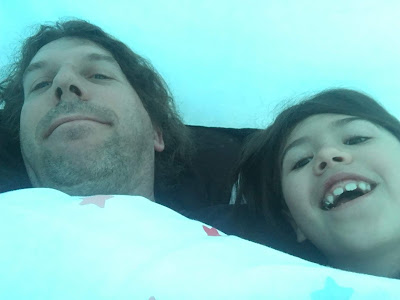 Lunar and I were both awake by 6 a.m. - the noisy dawn chorus had woken us up. These singing birds were real noisy. Too loud in Lunar's opinion. 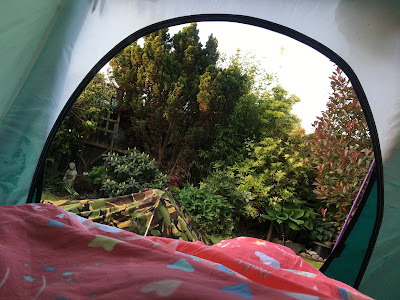 We were treated to nice views (of the garden) as we pulled the tent flaps back. Ha! It was surely going to be another beautiful day.

Shortly after wakening we were treated to further nice views, this time of our friends. Oh, how great is WhatsApp?! Looks like they had a great night too...
**********
Back in 2018, Jamie and I cycled a rather tough 300k event called the 'Yr Elenydd'. Thing was, during that event a rather strange cyclist, 'Lee Botwood' cycled alongside us at times. This Lee Botwood was overly interested in road kill - we saw him pick up a flattened hare and lick his lips. I make mention to him now, as Jamie has come up with a potential money-making scheme - yup, a 'Lee Botwood' menu card...
********** 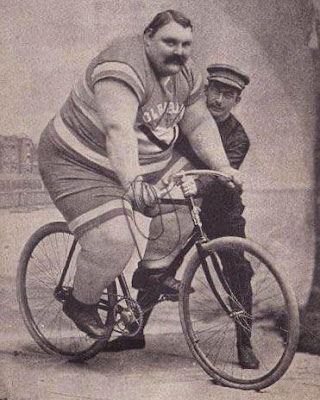 The last bit of big news for this blog post concerns PiXiE, my new fixie. I'm pleased to report the more I cycle her the more I'm learning to control her and more confident I feel. I still can't jam the pedals to stop, cycle backwards or any other funky tricks but at least I can stay upright and cycle long and far. 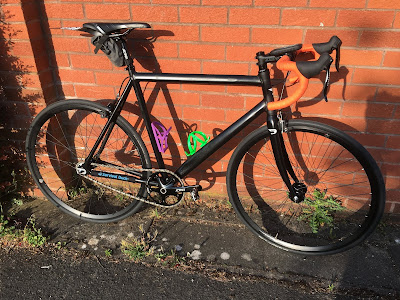 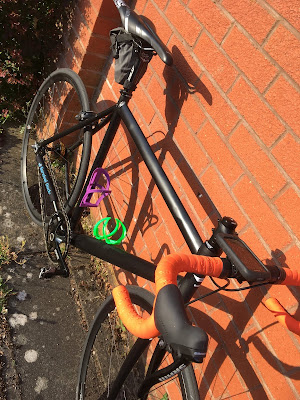 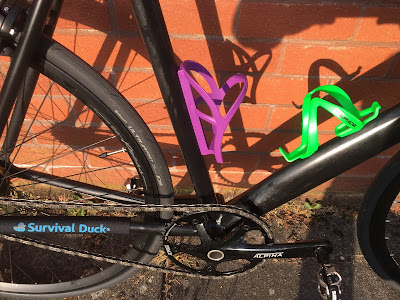 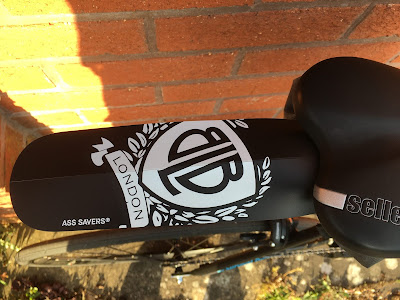 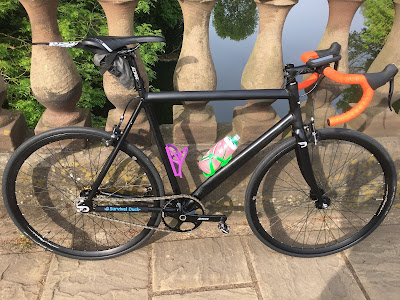 I think it's fair to say that PiXiE looks 'sick'. She looked super cool before, but much improved after pimping her up a little.
at May 09, 2020 No comments:

Fixed. A new experience. (AKA a 'suicidal response to urban conditioning'). 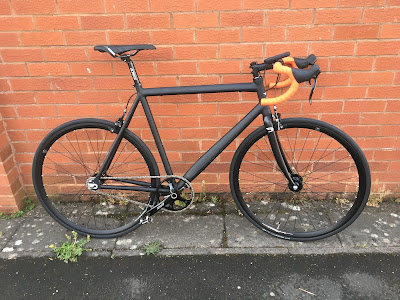 My new machine is a Dolan FXE. I really wanted a single speed bike ever since I sold my last one (or four) and was also tempted to try 'fixed'. Single speed bikes are fitted with a free-wheel, whereas fixed gear bikes are not. On a fixie the rear cog is joined with the rear hub, so when the wheel turns, the cog will turn too. My machine has a 'flip-flop' hub (aka 'double sided hub') which is a rear bicycle hub that is threaded to accept fixed cogs and/or free-wheels on both sides. This flip-flop hub essentially allows me to alternate between fixed and free-wheel styles by simply flipping the rear wheel around.

Since acquiring my bike (which I have affectionately named 'PiXiE the FXE), I have only cycled her fixed. This is the first time I have ever cycled a fixed gear bike. Riding fixed is a very strange experience to me being a newbie and all. At time of writing this blog, I have only cycled fixed for 3 consecutive days.

My first ride was just a short 6k jaunt and it was terrifying. I found I had little control and could not slow down or stop easily at all. Standing on the pedals was not possible and when descending it was as if the bike was forcing my legs to rotate. The dead flat roads were great, the down-hill scary and up-hill was kinda fine but I was not able to stand.

Day 2 was much improved. Still felt quite alien riding fixed and going around corners with your legs still rotating would surely take some time to get used to. I cycled further, about 20k, along some almost ghost-like bus lanes (great there was no traffic). I found that I could stand on the pedals going up-hill and had more (although limited) of a knack for slowing down (legs act as a rear brake and using the front brake really helps too). I read that by standing on the pedals, leaning forward and lifting the rear wheel helps to slow, stop and/or skid the bike. Hmm, continued to find standing on the pedals really difficult (unless going up hill). At one point though, a car pulled out in front of me and something strange happened. I'm not really sure what I did, but I swerved, the bike skidded and I stopped dramatically. Bizarrely, this gave me a bit of confidence. I started cycling a little faster down the down-hills (which were really just slight descents) and found that if I cycled faster then I was in more control and my legs would turn the cranks. When the bike got really fast, it's then that I felt out of control and the cranks would force my legs to spin, controlling me. Should I cycle faster still or try and slow the bike, I dunno?!

Day 3 and I felt much less fearful. Cycled a little further but sticking to mostly flat roads again. Much better at slowing the bike, though still not sure how to actually stop with any skill. My plan is to persevere and hopefully cycle more ascent and descent learning how to control my bike. I feel more focussed cycling fixed and as weird as it sounds, have more respect for this fixed gear bike. It's like this bike was controlling me (and still is to a degree) and it's my job to tame this beast.

The folk that 'know' say that riding fixed provides a great work out because your legs never stop and sure enough I'd agree with that. Furthermore, they say that riding fixed is a bonus as there are way fewer parts on the bike and as a result that equates to less maintenance, less costs, less weight and I'd agree with that too. What they also say, is that the bike can be cycled backwards (what?!), speed can be controlled by the tempo of your pedaling and the bike can be stopped by jamming the pedals. Whoa, my bike struggles with those last few things but who knows what the future might hold?!