This week saw me and my buddy Chris (and others) complete the 2019 Cycle for Uganda charity cycle ride. We had wanted to ride this event for years, but each year we found another something to ride or take our time. This year we pencilled the date in our diaries and nailed it. (This being the 6th year it has ran).
The start line (Clevedon Christadelphian Hall) was a great place to start. Surprisingly, I knew a few of the cyclists (including Ben and Hannah Adams and Dave and Rachel Cross - folk who I had met about 9 years ago on a certain LEJOG adventure). Chris knew even more folk than me. Some dude was cycling an exact replica of my old Cannondale Synapse too - same frame size and everything (I just hope his brakes worked).
After a brief briefing we were off. A bunch of about 20-30 cyclists cycling. For the whole way to the half-way point we cycled as a posse, or a peloton I guess you could say. This was really hard work - lots of stop/starting and frequent brakes. It was nice to chat with new folk and catch up with those that we knew. The urge to 'crack on' was always there though and the wet miserable weather would make us cold with all the faffing.
Isaac Adams looked like he had had a mud bath. Fortunate for him, he later travelled in a bike chariot as opposed to the tag-a-long pictured above. Much of the route was road, quite often country lane and much was also cycle path including the 'Strawberry Line'. No hills to shout about, it was only about 1,000m of climbing. When we got to the half-way point at Burnham-on-Sea we were greeted by my parents which was super nice.
My folks were not my only family there. My ma's cousin (that is my 2nd cousin) Adrian was there too. Adrian was doing a cracking job of driving the support vehicle. I didn't manage to get a photo of him, however, he took the photo above. 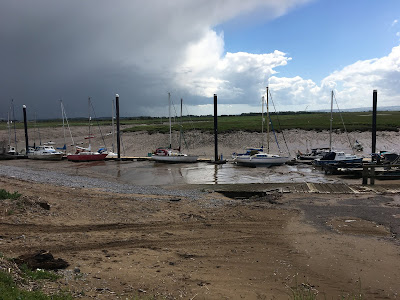 Some (but not all) of the return journey took us along paths we had previously cycled. Chris wanted to stop a take a photo of the above boats (so I thought I would too). These boats reminded us of a awesome adventure Chris and I had undertaken before when we cycled around the Isle of Wight and crashed out on his ma's speed boat. Aces. 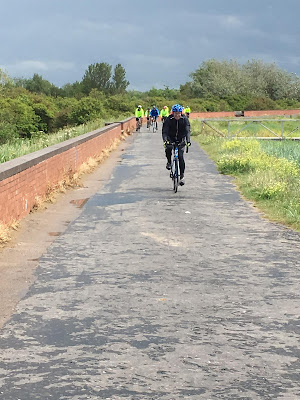 The afternoon started to clear up and proved more cheerful on the return. Chris and I decided to crack on at this point and cycled as a pair leaving the group behind. Apparently, the chap in the photo above was my brothers ex-wife's mothers brother. Wow, this all gets so complicated. The reason we were all cycling this event together was because we were either Christadelphians or had links to that community and wanted to raise monies to support an orphanage project in Uganda. This project gives grants to those who are caring for orphans, and due to the popular demand, this year will raise funds to install more water tanks and guttering. I'll leave a link to the Cycle for Uganda website at the bottom of this blog so if anyone is willing and able to sponsor/donate that would be great. The wonderful.org site take no commission fees, so, support please, please!
A while ago, Chris and I cycled a rather splendid 200k audax event around the Dorset Coast. During this event, a rather splendid lady called Barbara (aka 'old bat on a bike') took a rather splendid photo of us two, looking almost as splendid as the photo at the top of this blog post. Anyways, I mention Barbara because she has recently completed a cycle tour aptly named the 'light house tour' where she cycled to and snapped pictures of the light houses in the South West. I have no idea if she snapped the light house above, so, hey Barb's, this one is for you! Barbara is currently cycling around Ireland snapping pictures of light houses located there. This time last year, I too was cycling around Ireland (and did snap a light house too). You can follow Barbara's adventures here: OldBatonaBike.

Pleased to report that Chris and I completed our tough cycling event and finished a good hour and half (or more) before the others. This gave us ample time to drink much tea, coffee, etc, eat a little and generally catch up. We then returned to the start/finish and congratulated the other cyclists. We did the decent thing and joined them all for a splendid 'nosh up' and fraternising and story telling. We hope it's not 6 years until we cycle this event again. 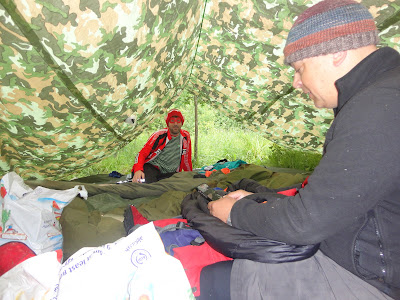 A frightfully wet and somewhat windy couple of days in June saw me complete my 6th consecutive bivvy-a-month (BAM). If my maths is correct, that means I have completed 50% of my BAM challenge for 2019. Woo hoo, only 6 months to go! 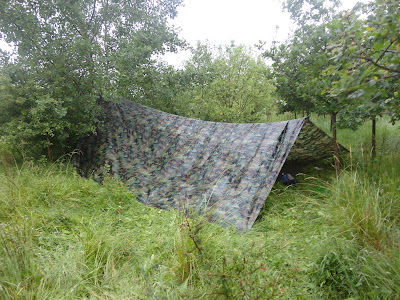 Rob dog and Ron (the phantom) joined me on this adventure. Due to the seriously wet weather, we took precautions and carried a lot of stuff to our secret camp. Poor Ron was saddled up like an ass - am surprised his bike wheels didn't buckle or pop a spoke. First road then a section off off-road took us to our camp spot.

The picture (map) above shows our where our hidden camp was. Three words describe exactly where we were. These 3 words are oldest, crowbar and glassware. Just for the record, tiger banging drums is a favourite place of ours to chill out... 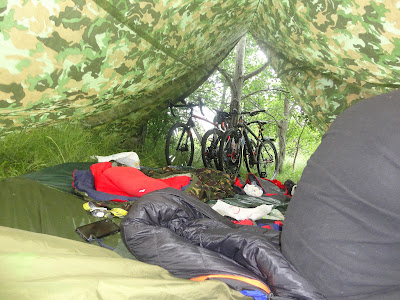 It didn't take so long for Ron's mahoosive tarp to be set up. This was just so huge, it provided cover for our bikes, our sleeping quarters and offered a spot to cook in too. I reckon we could fit eight folks under here with a push. 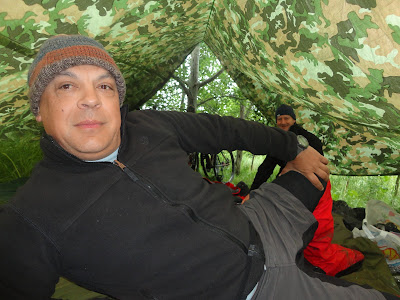 Ron was sporting his phantom-like kinky boots for this adventure. Such shoes are affectionately known as yeti's. I guess it takes all sorts. 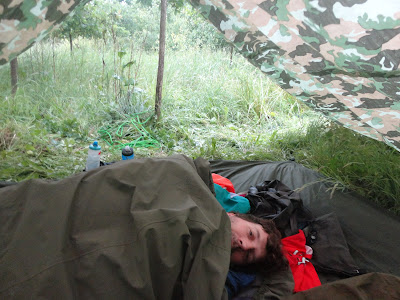 I think I was the first to settle and sleep on this starless, moonless night and was first up the following morning too. As usual we had a cooked supper before bed with plenty of fluid refreshment. Oh, how I laughed when Rob dog burnt a half-moon into his tarp (used as flooring) by putting down his frying pan. (That'll teach him for laughing at my inflatable pillow bursting on a previous trip). 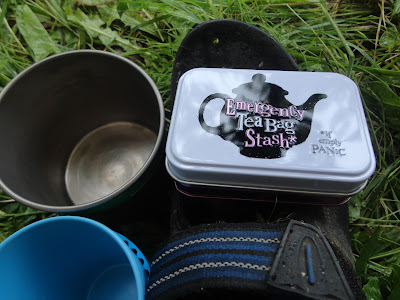 When morning came, I awoke Ron by pouncing on him. Oh, how I laughed as he appeared so frightened. (That'll teach him for laughing at my inflatable pillow bursting on a previous trip and shaking and waking me late at night to hear his story telling and quiz questions). Peace was restored once I boiled some water and made us all a cup of tea. A shout-out and thanks to Jo Hardy for my new lovely emergency t-bag stash tin. Get in! 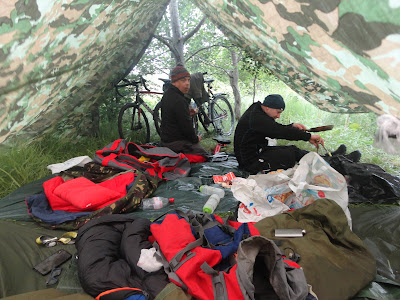 Rob cooked breakfast in the morning which was rather splendid. We would have had a greater feast, however, much sausage was stuck to Ron's yeti's (he must have trod on stuff as he exited/entered the tarp earlier). My runny eggs spilt over Ron's knife - accidentally, honest! 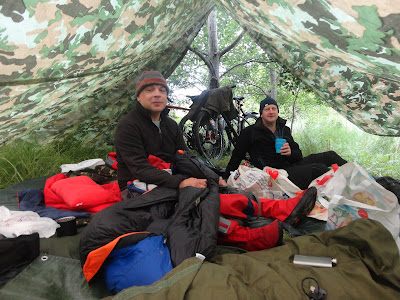 We all left the camp happy and smiling. We were soaking wet and it was a trifle menace de-camping with wet gear. Rob dog nearly lost control as he cycled through the ford (how disappointing) - he would not have been much wetter to be fair. It wasn't long before we were back home, drying gear and story telling once more.
at June 12, 2019 No comments: 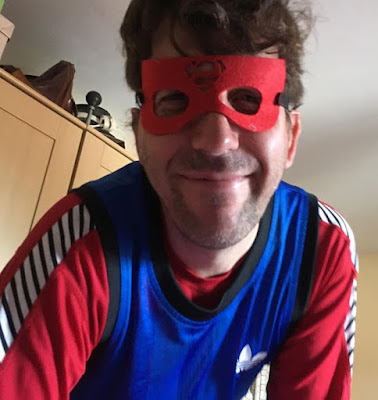 The very first day of this month saw me complete my PAM (ParkRun-a-Month) challenge for June. I ran my 25th ParkRun and finished 48/416. My finish time was 22:37 which was my fastest time this year (PB remains 21:39). It was good to see Phil B running today too. I have other friends who run this course but they are always hidden in the hoards (or maybe they just tell me they run?). 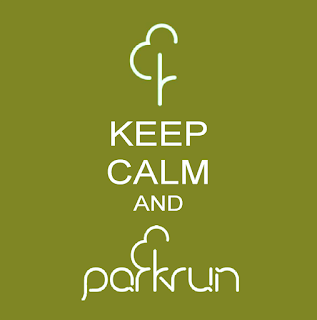 **********
My new Kask (Mojito X) helmet has been worn on a fair few rides to date, so figured now was an appropriate time to provide my latest review. Well, it fitted on to my head perfectly and was nice and light. It cradled the skull perfectly and the turn dial 'thing' on the back ensured a perfect snug fit. The buckles on the straps have been a real pain in the bum though. Well, more correctly, a pain to the ear lobe. The straps offer little in terms of adjustment and these buckles have annoyed me so much rubbing against my ear lobes. (My old Giro Skyline had pretty awesome strap adjustment).
I googled this strap menace phenomena and saw a lot of cyclists were complaining about the self same thing and despite this, pretty much all reviews of this helmet have scored 5/5. Solutions were also suggested - such as cutting off the buckles. As drastic as that sounded, I did just that and now my helmet fits and feels just awesome. A perfect fit, no movement, and no rub. Aces!
at June 01, 2019 No comments: