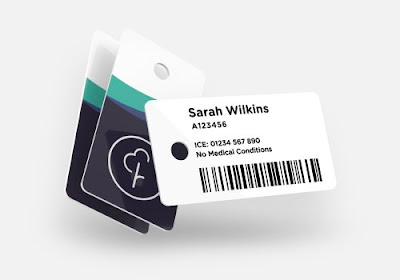 Oh man, my running this year has been relatively rubbish. I set myself the challenge of completing 12 consecutive monthly ParkRuns. My ParkRun just gone (Christmas day 2019) completed my challenge. Woo Hoo, one might say, but I have no result recorded to prove I ever ran this event. Grr, last ParkRun of my challenge and I forgot my bar code. How irritating to hear the words 'no bar code, no result. I know what position I finished, I have the GPX track recorded on Strava. 'No bar code, no result'.

On reflection, as stated above, this was a rubbish year of running. My last ParkRun, in effect, didn't count. The previous run saw Phil B cross the line before me. My only ever AV handicap ParkRun saw me finish last. Hmm.

Well, I've since ordered some funky barcode tags like those in the picture above. I'm prepared to forget about the Phil B incident. I'm determined to complete another handicap run and not finish last. Will I aim to complete (another) ParkRun-A-Month (PAM) in 2020, hmm, let me think on that...
at December 27, 2019 No comments:

Woo hoo! I completed my Bivvy-A-Month (BAM) challenge on Friday 13th December 2019. Aces! On Friday 13th what could possibly go wrong? Ha! (I'm not in the least superstitious). Dr Peppers....
It always feels great to complete a challenge and I’m so pleased that I completed this one. It nearly didn’t happen as virtually all my wild camping buddies (we dub ourselves the ‘wild campers’) became 'wild bailers' at the last minute for one reason or another. Only my bro ‘Rob Dog’ ventured out with me on this classy finale.
Ok, so I’ve completed a whole year of wild camping (camping at least once monthly) and raved about it lots and blogged about it too. However, just in case anyone else is considering giving this a go, here are the rules:

1. Sleep out at least one night during every calendar month (using a tent, tarp, bothy, bivvy bag, wigwam, cave, shopping trolley, etc). You can start any month you like, just as long as you tot up 12 consecutive months.
2. No paid-for accommodation ie campsites or hostels.
3. A bike must be involved – it’s bikepacking, the clue is in the name.
4. Your own garden doesn’t count, although next doors does – if you must.
5. A multi-night trip that takes in both the last calendar night of one month and the first night of the next month will count as two months.

Hmm, let me review each of the rules above in turn:

Anyways, back to this December camp. It was a cold, breezy night with rain in the mix too. Rob Dog and I decided we would go and camp in the 'Woods of Doom’ which incidentally is the place where we both had our first ever wild camps (I think). The woods on this occasion had been hacked big time by the Forestry Commission and provided less shelter and protection as a result and we were clearly more visible. Oh well.

The near full moon made it relatively easy for us to find a suitable camp spot. We did move on from our first pitch though as fox poo was evident. At the second spot we faffed for ages trying to rig up a tarp due to the wet weather. After an age, the tarp was up and Rob Dog set about cooking whilst I set up my bivvy.
Tea was delicious – bacon, egg and spicy cheese baps followed by pork and apple sausage. This delight was washed down with a shot (or 2) of whiskey. I had been in the pub just prior to this trip with SJ and thought I nearly convinced her to camp to. Hmm, maybe another beer and she would have?!
After eating, I soon nestled down. Rob Dog faffed a bit and set up his bivvy. Next thing I knew, it was the middle of the night and I needed to wee – too much cider. Slept relatively ok, however, the wind was whirring at times and on occasions the hoots of owls could be heard. 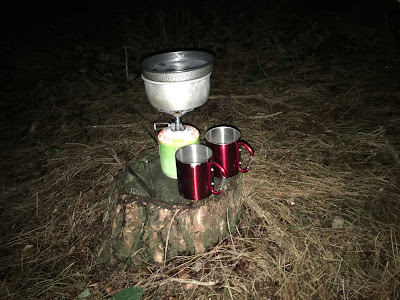 When morning proper came (at 5:58 a.m, Rob Dog reporting it was time to get up) it felt chilly. I layered up and soon warmed up once Rob Dog had cooked a breakfast almost identical to our tea last night. I brewed some Jasmine Green tea to accompany breakfast. It is quite awesome having a cooked breakfast in the great outdoors.
Breakfast devoured. Camp cleared. Off to work for me!