The past week was all about beer and bikes. I know I keep saying I need to drink less and cycle more but it just so happened I couldn't do one without the other. Seriously, beer appeared to be a major feature of the bike events I entered.
The first event was Purity Brewery's Mad Goose Chase. Not exactly sure what this event was all about. I thought the idea was for random cyclists to cycle any route of their choosing and rock up at the brewery. Once at the brewery, cyclists would fraternise, drink beer and celebrate the end of the summer cycling season.

Ron and I cycled our Reed route and got to the brewery not long after opening time. We weren't the first there but just like the others that were there - we ordered beer and drank. I had a Purity Gold and Ron opted for a Maverick. On top of beer, we ate burgers, flap-jacks and banana's. We were photographed lots and Ron was interviewed at one point. They asked if he was aware what this event was all about and questioned if we knew the story about the mad goose - he didn't and we never found out. Our photo was published on their Twitter page.
Short while later and Jamie, K and Toll rocked up. Was great to see these guys and we had a lovely evening. Many beers later, we were the last to leave and all cycled back to my village. Jamie, K and Toll had to cycle to Birmingham too. Crazy folks! The Birmingham bunch of bikes was featured on Purity's FB page - pretty cool eh?!

The second event was pretty awesome too. Ron asked me to join him on a Sika event. Had never heard of Sika but am now aware they are some seriously major building or construction company. They had put on a cycling event to help raise monies for the British Heart Foundation. 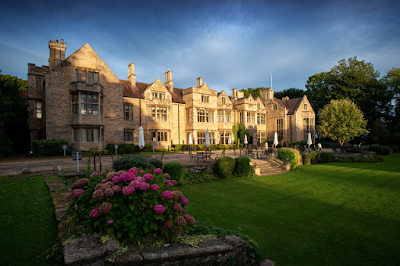 Ron, myself and Ron's Mrs (Deb) left for the event on Friday and had to travel long and far to the rather splendid Redworth Hall near Durham. This was really quite awesome and we had an all expenses paid accommodation for 2 nights. The first night we drank beer and then ate a lovely meal. All our food was paid for too and it was delicious. Just before retiring to bed, we attended a presentation and decided on our route option for the event. We could cycle 25, 50, 70 or 100 miles. We opted for the 70 mile route as unlike the 100 mile option, this included a big climb.
On Saturday morning, we had an awesome full English breakfast and more. This was just great and then we set up our bikes, complete with spot-tracker ready for the event. We could start pretty much when we liked. We had the option of 'racking' our bikes the night before but we were lazy and figured they'd be fine in the car. Come 9 o'clock (or there about) we set off!
The weather was just about perfect for whole event. The scenery stunning. The food stops were great - more bacon butties, sandwiches and energy bars. The hill was pretty great too - Chapel Hill, I think?! 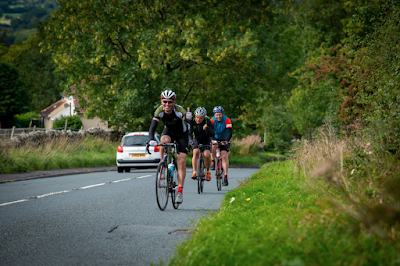 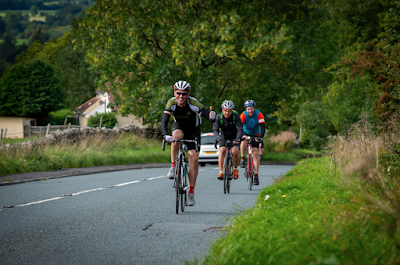 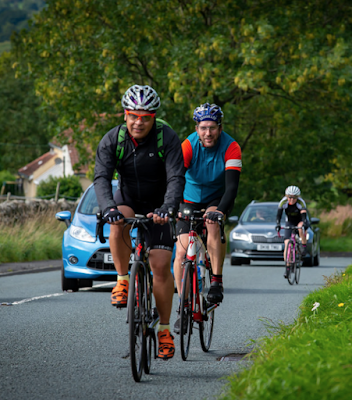 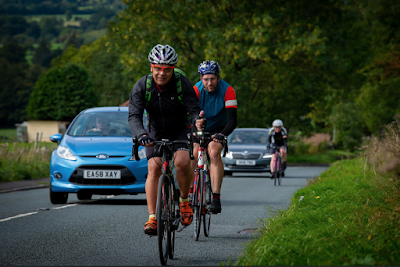 Before and after the 'big hill' there were little undulations. On one such undulation there was a trigger happy photographer snapping away. I guess it made sense to slow folk down if you wanted to take their picture. The actual last 20k felt downhill pretty much all the way to the finish. What an epic ride! 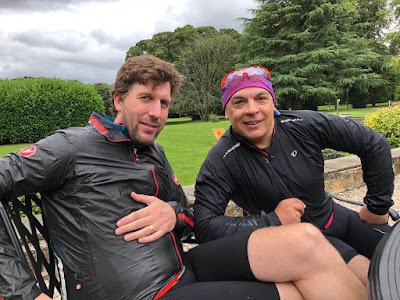 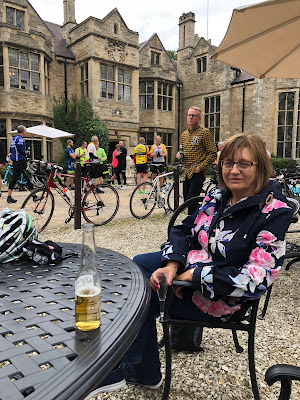 Deb joined us for more celebrating. More beer. Was ace to watch others come in and clap and shout. A girl aged just 5 completed the 25 mile circuit. 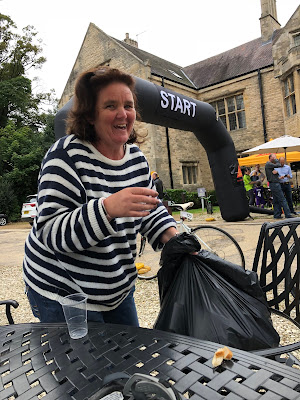 Mary and other Sika helpers would pass round more beer, wine and spirits. Mary (in fact she was Mandy, but reminded me of Mary in Ireland) even collected the spot-trackers from the bikes. Sika had put on a very awesome event. 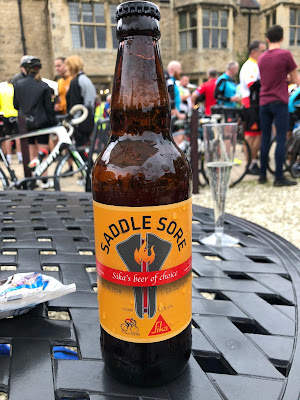 Sika even had their own beer. Well, a Sika beer of choice anyway. I preferred the Prosecco which I thought was champagne. Silly is a silly does.

Such a strange event. Amazing hospitality, attention to detail, generosity and support. Free beer, food and accommodation. Relative easy cycling route too. This all felt too unreal to be true. 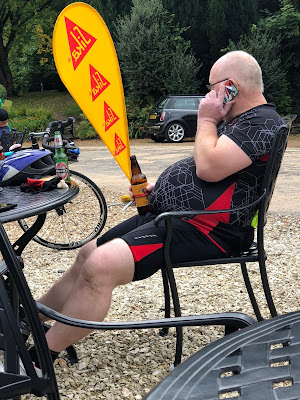 Others were clearly having a great time also. Little did we know that there was a further (free) drinks reception at 7 o'clock that night, followed by a presentation by Mark Beamont - the dude who circumnavigated the planet by bike in 80 days. After another awesome meal the night was topped off with an open bar.

Beer and bikes, who'd have thought?

Little training over past few weeks. More fat than fit. However, the adventures and challenges continued. 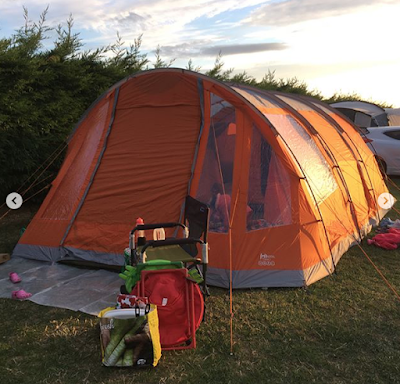 A great adventure was had in our new tent. We managed to get a Vango Iris 600XL in the sales. We think it's pretty awesome. 70% off in end of season sales. Bonus! 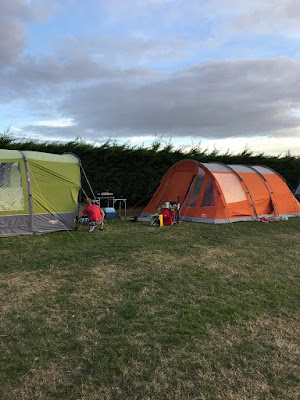 The tent didn't take too long to pitch and was not overly complicated. It looked pretty neat from the outside. Fantastic colour orange. In the dark it lit up like a pumpkin. 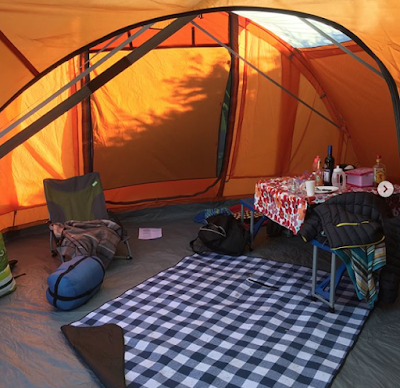 Very spacious on the inside. Fits our family of four just fine. Big enough for guests too - just as well as Aid and his kids decided to hang out with us.
Better yet, the tent was big enough to play three player chess - now that's challenging! That kept us amused for a fair few hours. I wonder if there is a four player chess? 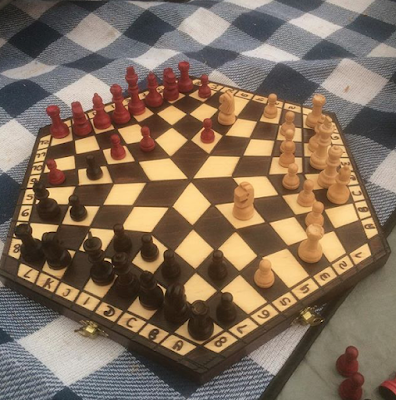 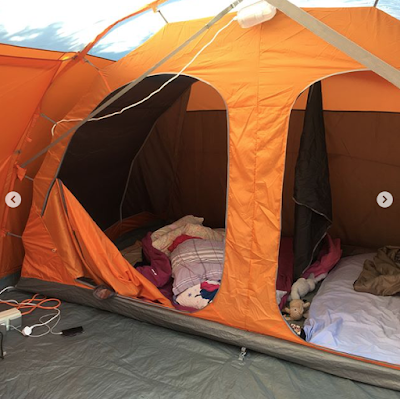 Tent was easy to take down and pack away. Wonderful weekend camping in Stratford. Despite having plans to run Stratford ParkRun, that didn't happen. Upcoming challenges must include ParkRun, and definitely include a wild camp and a cycle in the Pennines. Oh the joys...
at September 09, 2018 No comments: