''Stopped
Short
Grinding halt
Everything's coming to a grinding halt
Everything's coming to a grinding halt''
The above is an excerpt from The Cure's song 'Grinding Halt' and keeps filling my head-space at this current time with all the Covid-19 issues going on. Life has certainly slowed down. I wish The Cure were The Cure.
No plans, no goals, no races, no ParkRun, no audax, no TransAlba, stopped short, grinding halt, everything's coming to a grinding halt...
At least my family and friends are well and that's certainly what is most important. I'm blessed to be fit and healthy too. Praise and thanks to God.
So what happens next? Not sure. ParkRun-A-Month and my Audax RRtY won't be happening as initially planned. Things will re-start when they re-start. It is what it is. The second instalment of the TransAlba Race has been postponed until 27 June 2021. That kinda suits me too. I went from pair (Jamie and I) to despair (solo, just me) but now it looks like repair (Jamie and I).
Ha! Whatever, I'll keep dancing before the storm....
at March 28, 2020 No comments: 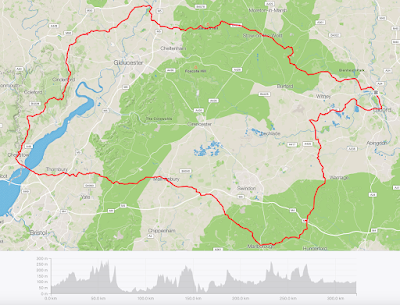 Last weekend saw me complete 'The Dean', a 300k+ audax event that started and finished in Oxford. I cycled this event back in 2011 with my buddy Ron. Several (well, at least 2) attempts were made to cycle this event again but hostile weather put play to that, until last weekend anyway. Below are my jumbled recollections of the said event.

Set my alarm for 4 a.m. and after a swift Alpen breakfast set off for the start - Oxford Park and Ride. Once at the start collected my brevet card from the organiser, along with a banana, crisps and cereal bar for good measure. Hastily ate the crisps and banana and then set off in the dark following a number of red tail lights. Not sure how many had entered this event but would guess around 100.

Only recently have I started to cycle with a single ear bud in my ear listening to audible books and pod casts. This helps the miles pass by speedily. More focused on my audible book, I was 10k past the first control (Stow) before I realised. Damn blast - I wasn't going to cycle back to just get a proof of passage (POP) receipt.
Before long, I was cycling familiar paths including Cleeve Hill and passing through Bishops Cleeve, Winchcombe and Tewkesbury. I think listening to my audible stuff took my concentration off the hills and strangely I remember more about the Arctic than I do those inclines. Ha! - that's what you get from reading adventure stories. The route I cycled added about 10k during this section as I re-routed to miss flooded areas. My first proper stop was in Newent, about a third of the way into this event. Not a fancy stop in a cafe, rather a sit on a bench eating ready made sarnies. I chatted to a few other cyclists here including Lee who I had cycled a stretch of the Giants Tooth with last year. 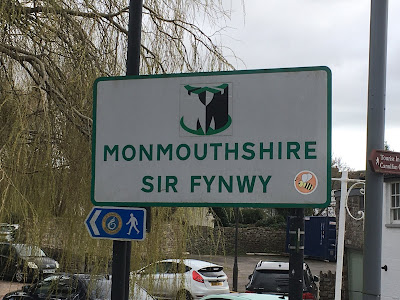 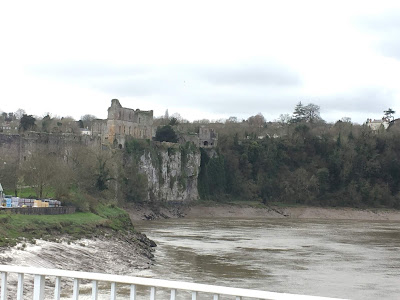 Is funny cycling an event that you have cycled before, especially when it seems totally different to what you remember. This ride was no different until I started cycling through the Forest of Dean and passed the Speech House. Memories of Ron's first aid (now there's a laugh) came flooding back - it was here that he removed a bug from my eye, 9 years ago! I remember the bug from 9 years ago but for the life of me can't remember the control in Chepstow which I visited just 2 days ago. Hmm. No, wait, after much thought I do remember - I stopped at Weatherspoons and ate a burnt hamburger and chips. 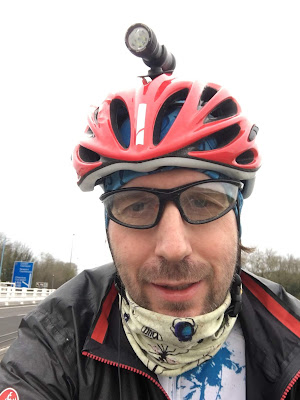 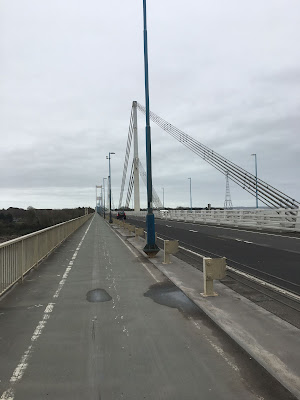 I vividly recall cycling the Severn bridge. My headspace told me that I wouldn't be cycling across the bridge due to flooding, so it was kind of a nice surprise when I did. Love this bridge and have cycled across it many times. Also in my headspace was the 'fact' that I would see 2 white horses (chalk horses) somewhere on route. I hadn't as yet and it turned dark before I reached the control which was Waitrose in Malmesbury. (Had told my kids I was cycling an event to see 2 white horses and would take pics of same and send back home). The horses never appeared. Hmm. Malmesbury Waitrose was ok, however, the cheese toastie that I ate was over-priced.

Left Waitrose and headed for the Marlborough Downs. I'm sure the white horses were around here somewhere, however, I saw them not. Maybe it was too dark or maybe I had gotten into my pod cast too much. I had listened to a whole bunch of interviews where Kelly Homes was talking to folk about their mental health as part of a series called 'What Do I DO'. Amazing how exercise seemed to be a positive factor in most peoples mental well-being. Listening to the pod cast and exercising had prevented me 'going mad' and I was able to cope with big hills and losing my brevet card. Ha!

If truth be told, I didn't know I had lost my brevet card until I reached Membury Services. These Services
were great - I tucked into a bargain bucket for one at KFC. This was the best food I had eaten all day (and had recently 'gone off' KFC). Balance was restored.
Final leg took me back to the start in Oxford. There was an info control somewhere but since my brevet card had gone AWOL I didn't even bother to stop. This section was less hilly and without any major menace reached the arrivee. No major menace except for a missing brevet card! 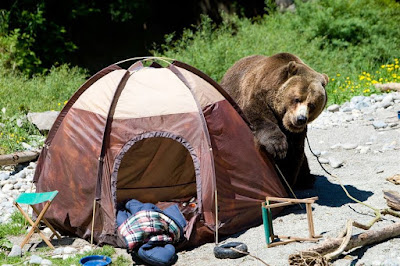 Failed to keep my Bivvy-A-Month (BAM) challenge going, as I didn't wild camp at all last month. Not much bothered as I managed to BAM for 13 consecutive months. Moreover, I got the badge for completing a full calendar year. Still plan to wild camp (lots) this year and have new gear to test including a Therm-A-Rest NeoAir Xlite sleeping mat and a funky Sea to Summit Aeros UL pillow. How exciting! I'm sure a review will follow. My buddy Jamie has bailed out of the TransAlba race which we planned to ride as a pair later this year. He had his own reasons for bailing. I just hope I'm brave enough to cycle this solo. I've wild camped solo before but the thought of 8-10 nights on my lonesome, in dark rugged Scotland, gives me the heebie-jeebies! Maybe I'll cycle faster with an element of fear? To help encourage myself, I downloaded my first audible book - 'True Grit' by Bear Grylls. This book contains a bunch of true epic stories of heroism and survival of individuals who have battled through the harshest of situations and circumstance and survived. I'm sure it'll inspire me. 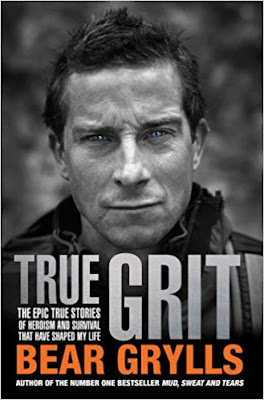 Today, I ran my 34th Parkrun and hence ticked off March for my ParkRun-A-Month (PRAM) challenge. I finished 84/489 and completed the course in a time of 24:32. A relatively poor time, however, it's my fastest this year! 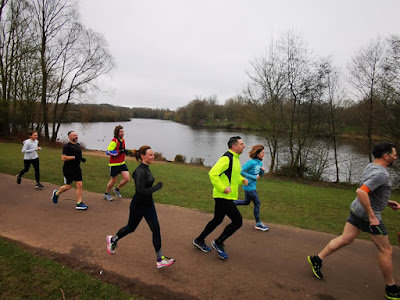 On 29 February 2020, I completed my 10th Snowdrop Express audax to date! This is one of my favourite audax events that I try to make sure I cycle each year. This event starts and finishes in Hartlebury and passes through Upton and Evesham. Pig Hill is a nice delight included in this event.

I first rode this event way back in 2010. Have now cycled it, 9 more times since then. Hmm, I might just well cycle it again.

Each year has it's own story and this year was certainly no exception. A few folk (about half the field) didn't rock up due to fear that the event may be flooded and storms might persist. A few of my friends (Jamie!) didn't make it to the start either. Anyways, on the start line alongside myself was Chris Hodge, Ron the Phantom, Ian Cross, Phil B, Tony G and Mark (who up until now I thought was Jez).
Almost as soon as we started, it was game over for Tony. Tony's free-wheel had gone kaput. Poor Tony! (Hadn't seen Tony for ages and what a transformation - he now had the cycling bug, lost weight and was training for an event in 5 weeks time). Mark sped off but the rest of us cycled as a small peloton and it was just ace catching up with everyone. Despite the fears of some, the weather was ok - the sun broke out and it was near perfect cycling conditions. Maybe just a tad windy. Great to see Mark Rigby at the first control in Upton. Mark R stamped our brevet cards and we tucked into some nice grub. Chris H brought me a super tasty cheese and onion toastie. So warm and sunny it was that we ate outdoors! Upton had suffered with flooding over recent days though and much flooding was still to be seen. A couple of days ago the water levels rose up to the glass on the flood barriers. 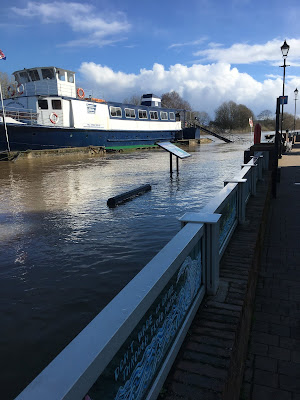 Next stage was certainly adventurous. Our pedal at times turned into a paddle. Yup, there was much flooding in parts. As we passed cyclists in the opposing direction they would warn of flood levels which seemed to ever increase. This short section took us to Evesham where the river level was high but no major concern. Here, most of us tucked into some delicious bread and butter pudding. Tony rocked up here too - on a different bike. After fuelling, we set off, in relatively nice conditions on the last leg.
The last leg was the hillier than the previous 2 but no major menace. The Lenches were beautiful and that's where most the climbing occurred. We had to navigate a few more floods but nothing like those we experienced earlier. Pig Hill proved to be a pig - not because of the climb but because as we started climbing the wind turned into a headward direction and hail threw down. As soon as the summit was reached, the wind and hail stopped. How bizarre. Before you could say 'softies were those who didn't rock up', we had reached the arrivee. More food (sausage sarnie for me) and fraternising. What an epic event. Totally aces!