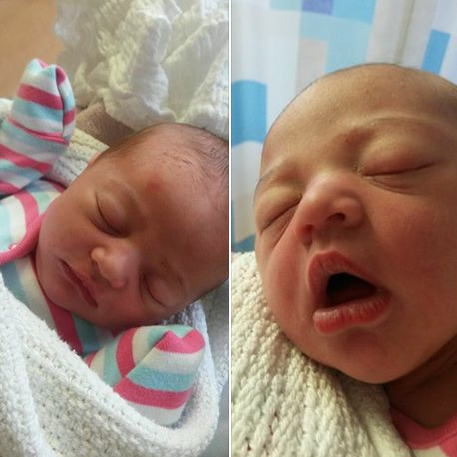 A lovely week spent at home with my new daughter Melody. My family feels complete now. Am so blessed to have such wonderful family and friends.
Talking of friends, this week kicked off with a friends party! Yes indeed, my good friend Ron (the Phantom) reached the grand old age of fifty! Happy birthday Ron!

Last week, I made an attempt to start skipping. This week, I attempted to skip some more! On a few occasions throughout the week I tried skipping 4 sets of 60 skips. Sometimes I felt proper whacked, other times just whacked. Am trying to build up the number of skips in each set as the weeks go by. Am a little worried that my skipping might come to a halt when I return to work. Skipping doesn't take much time at all, but it's hard to find a 10 minute pocket in daylight. My ceilings are too low to skip indoors!
Monday was the first time I had cycled in some time. I didn't cycle too long or far but covered 70k. 70k was my target for the week, based on my PBP training plan. It was very cold during my cycle with much road covered in frost and ice. I cycled a crazy route that made it's way to Rowney Green where snow was present in some patchy areas. On route I passed a beautiful windmill where I believe a family actually reside. 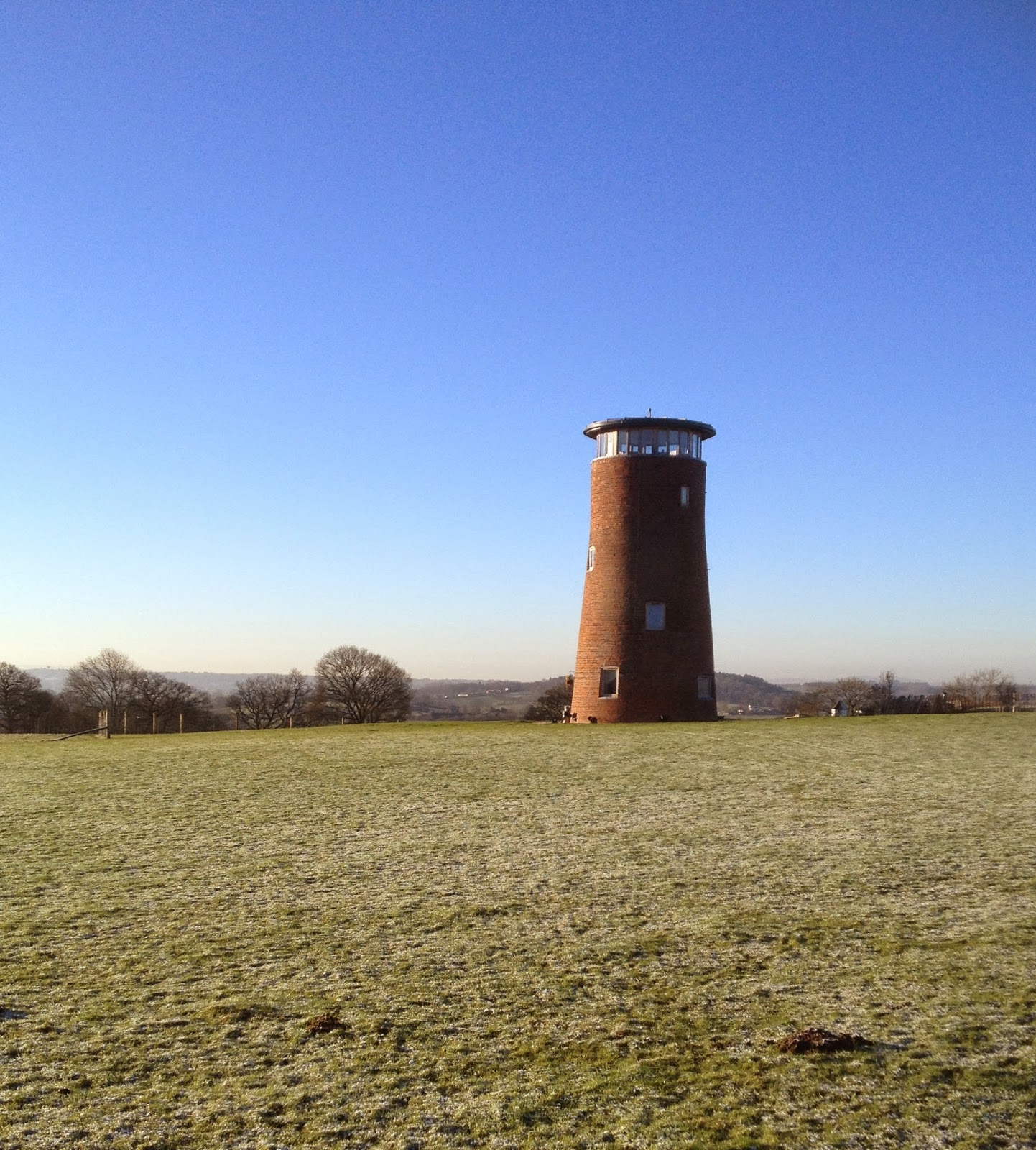 Arrow Vale Lake was also cycled around and the very beautiful Earlswood Lakes too. My commute bike was the bike of choice for this adventure because it was the only bike fitted with suitable tyres for the icy conditions. Oh the joy of cycling!
Tuesday was an awesome day too. We had lots more visitors. One such visitor was Chris Hodge who had brought with him my retro Raleigh Esprit - all set up and ready to go! How awesome! This was the second bike that Chris had built up for me now. 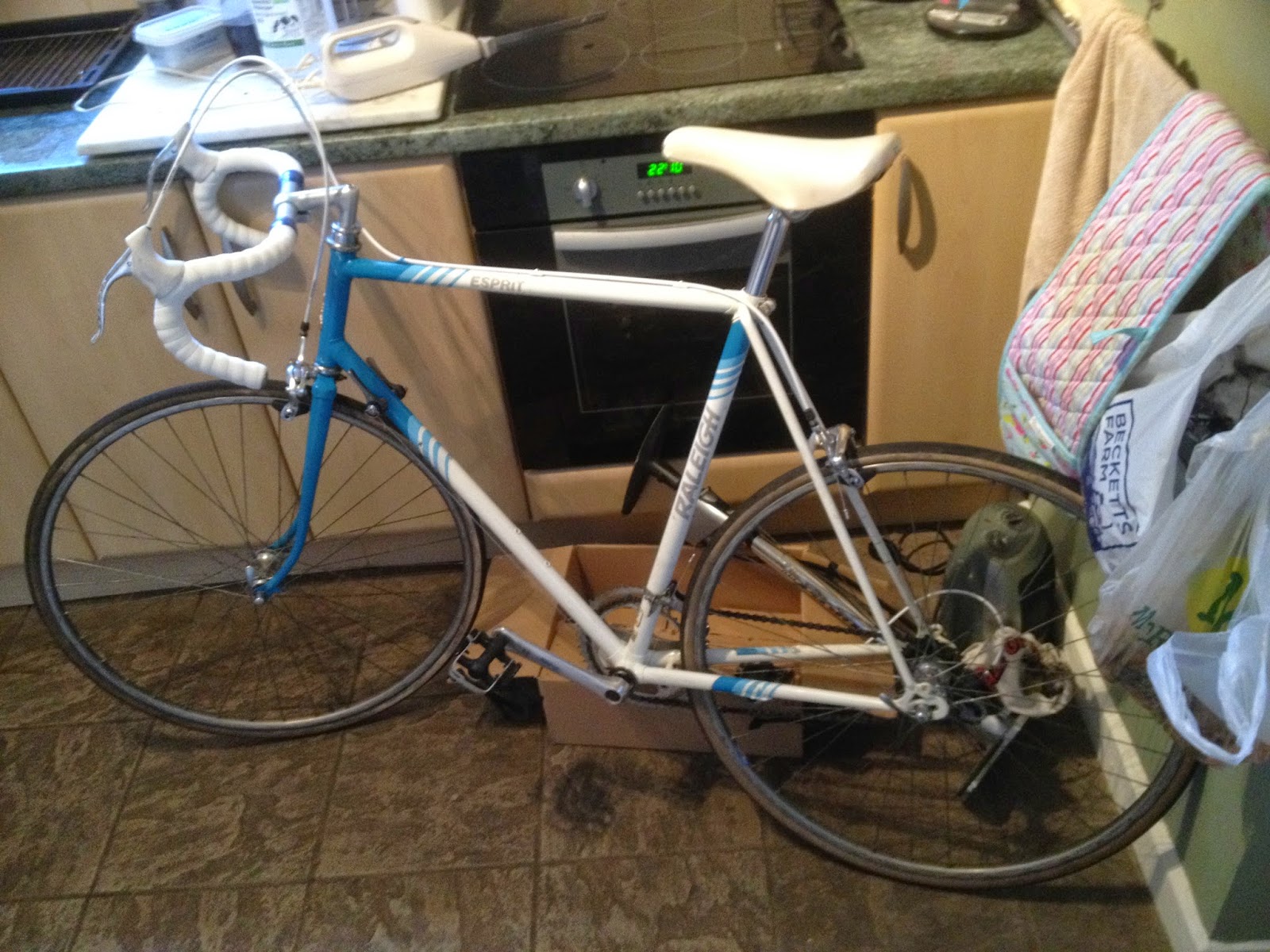 No real road test as yet, but sure enough it had to be taken out for a mini spin. Felt kinda weird riding a new bike and all. It rolled well and performed just fine! Looking forward to riding this bike during the Snowdrop Express audax in February (which I have cycled 3 times before, using a different bike on each occasion). 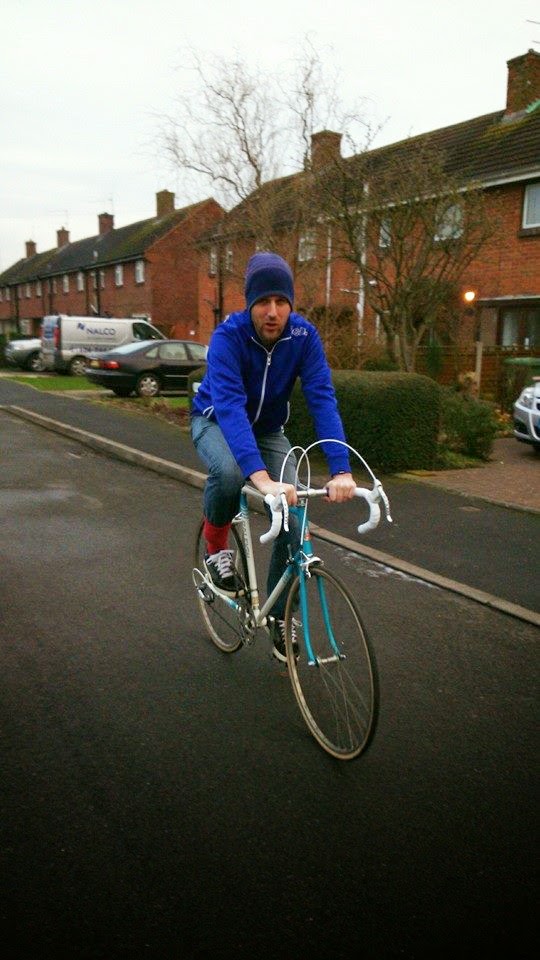 The original plan, as you may recall, back in September 2014, was for me to build up this retro bike myself. I didn't build it - Chris did. We all know my bike building skills are pants but I like to think that I was instrumental in getting the job done all the same. (I did wrap the bars myself)! Chris's building skills are great and I'm sure this project kept him out of trouble for a stretch! The plan was to build up a complete retro bike and spend less than £150 in so doing too. I spent less than the budget - £146.94 to be precise. For that money I acquired decent bits/components/parts which are as follows - frame (with forks, stem, bar, headset, front mech), Shimano RX100 brake calipers, Shimano 600 rear mech, Shimano Dura Ace brake levers, bar tape, mech converter, Shimano 600 SL-400 7 speed shifters, non-aero hoods, Shimano Dura Ace EX brake levers and a Shimano 600 crankset! You might have noticed that I purchased 2 sets of brake levers - this was an error on my part as the first pair were non-aero which does not qualify as retro (and I was still under budget)! Some bits were donated by Chris (including the wheels with Shimano 600 hubs), Lin and certain others. The only thing it really required to complete the build was some new tyres. 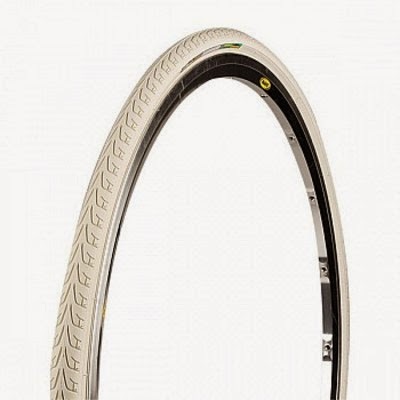 Just like the love she is, my wife ordered me a pair of Vittoria Randonneur II wired tyres. The tyres were white and were sure to look amazing on this project. I chose 28mm tyres simply because the frame had enough clearance and I wanted to make this non-racing bike of mine as comfy as possible and reduce the risk of punctures. The other plan for this bike (in addition to cycling the Snowdrop Express) was to ride a work and back commute - when new tyres arrive, watch this space!

My tyres arrived on Thursday but could not be fitted to the bike right then. This was because I needed to order a couple of inner tubes (£1.99 from Planet-X). Oh, and the bike would benefit with a bottle cage too.
Finished the week with a  5k run around the Studley triangle. Am pleased I managed to get a run in this week considering the 'crying babies, sleepless nights' phenomena. Next week and it's back to work.