Monday morning menace! Gozzard bikes contacted me informing me that my new frame was damaged - apparently the bottom bracket threads were threadless! Planet X were swiftly contacted who stated that the threads were there, it was just that 'paint overspill' was covering up the threads. Apparently nothing a threading tool cannot put right. Call back to Gozzard bikes who are happy to use said tool but want to charge me an additional £20 for the privilege. Pah! Pink stinks!

Tuesday was the day that my adventures for the week really started. Ron and I cycled around our village. It was like the good old days, we were cycling in wet weather and later than of late. We saw 3 deer running alongside the road before jumping over a hedge and into a field which was super nice. I thought the deer were joggers initially until my eyes became better accustomed to the dark. We visited 'The Bramers' later which was interesting because they now live in the house my old school mate 'Spencer Braithwaite' used to live in. Wow, must have been about 30 years since I last stepped into that house.

No adventure (as such) on Wednesday or Thursday. However, on my way into work I saw the most beautiful full moon. God's creation is truly awesome. 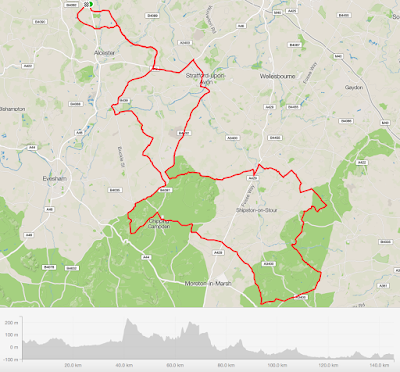 Friday was the big adventure this week. My plan was to cycle the Shakespeare 100 but to change the start and finish points to nearer my abode. Had a false start because now sooner had I started, I had to turn back and ensure I took some money with me. Once on my way proper I soon settled into what was going to be a relatively long day.

Very foggy/misty for the first couple of hours. I could see what looked like a brilliant full white moon - how could this be?! Well, this moon was actually the sun and awesome it was too. Throughout this ride I saw it change colour and my last sighting was it being a beautiful orange.

First major climb was Saintbury Hill (was expecting Fish Hill) which was only as tough as expected. The ride itself was pretty undulating in nature but only 2 major climbs. Once I reached the summit of climb 2, a posh old chap pulled alongside me in his car and congratulated me for climbing said hill. He then had the cheek to ask me if I had gotten off at any point. Nice chap really and he was amazed how bikes had 'moved on' since his day. A bike with 22 gears - unbelievable!

Stopped for a bacon roll at a cafe called Wyatt's (I think). The roll was just ok and the cafe a tad over-priced. Was pleased that the accompanying tea warmed me up a little. 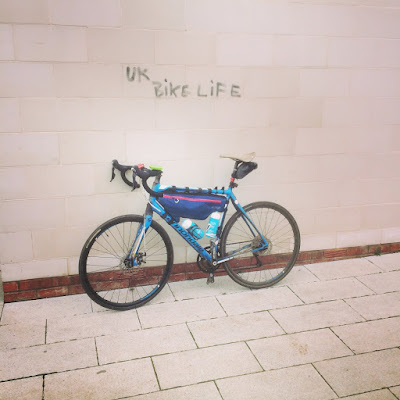 The route eventually took me into Stratford - being a Shakespeare route, I figured it had to. I stopped at a location to take a photo, which took, and then my phone died. This photo spot has seen 2 of my bikes here now. Ha! Not long after being in Stratford, my route ended, I had reached the finish. Not my finish, just the finish as recorded on my downloaded GPX file. The problem here was that my (Lin's) Garmin did not have maps so I was unable to pick a route to the official start. No bother really, I had cycled enough and was happy to head home.

My route took a final twist before reaching home. As I was using my gravel bike, I decided to add a nice stretch of off-road just for fun. Near Alcester I hit an off-road track that took me down to Coughton Ford. Only a few miles after the ford, I was home with a dirty bike, sore bum and tired legs. Altogether, a good day out!

Saturday saw me complete my 9th Parkrun and my 2nd at Hanbury Hall. I do like this course as it's all off-road and the numbers are smaller. Some folk were talking to me about Ironman (as I was wearing my Ironman top) which was nice. Hard to believe that I actually completed that event earlier this year - wow, certainly not that fit now. My run took me about 26 minutes, which was nothing to shout about and was near my expected time. This was the last Hanbury Parkrun before xmas 2016 but there is an Arrow Valley Parkrun next week which I might try and attend. Earlier in the year, I had hopes of completing a Parkrun in a time of 20 mins something (my PB is 21 something). Don't think I'll beat my PB this year and maybe my hopes will remain just a dream. Who knows?

Sunday was a day of rest. At least at time of writing it was. Should I have pushed myself to do something, then this last paragraph would have been re-written. Ha!
at December 18, 2016