Last few weeks have been filled with much adventure. Indeed, lots of new challenges and happenings. Guess I'll start this blog post by talking about Pilate's. 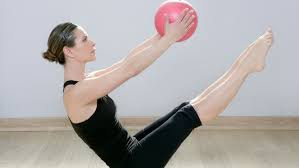 So, what is Pilate's? Well, in a nutshell, it's a form of exercise that concentrates on strengthening one's core. Essentially, its aim is to improve general fitness and well being and considers the mind-body connection. It concentrates on posture, balance and flexibility and involves controlled breathing. Anyone reading this will know that Pilate's is not inherent in me. In fact, I believe my core is rotten, my posture sucks and I have poor core strength.

My wife (SJ) was initially delighted when I agreed to join her at Pilate's class - she had been telling me for years that I needed to concentrate on my core. After 3 classes, I think she wishes I never started. Sadly, I'm a bit of a comedy act - I appear to be the only one who ends up facing the wrong way or losing my exercise ball! I've ordered an exercise mat of my very own, maybe that'll help?!

Another adventure involved another wild camp which was pretty awesome. My brother Rob, my buddy Ron and I decided we would camp out and chose an 'open' spot as opposed to a forest, just for a change. We headed to our secret destination under a moon-lit night. Our open eyes could see many starts and the planets Mars and Saturn too. Awesome. As far back as Biblical times, the constellations of Orion and Pliades were spoken about.
Before bed, we had our usual supper of sausages and alcohol. Rob cooked the sausages - delicious! Ron poured the whisky (great stuff) and the Icelandic vodka (filth - tasted like medicine). Then we swiftly dozed until about 4 a.m. 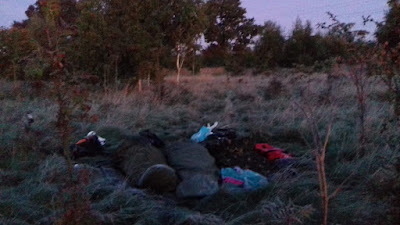 Sure enough, around 4 a.m. I needed to relieve myself. Amazingly, our bivvy bags were covered in frost. Toasty warm on the inside though, that DIY down sleeping bag that SJ made is ace and coupled with my Alpkit one, a real winner. When I returned to my bivvy, menace struck. Bang! Oh no, my wonderful inflatable pillow that Jamie had gotten me for our TAW adventure had just burst. This popping made Ron and Rob laugh and laugh - I still don't think it was funny! (Ah, poor Tim). Getting back to sleep was difficult now, especially when coupled with Ron's snoring. However, we all managed a few more winks. Then, I woke everyone up again... 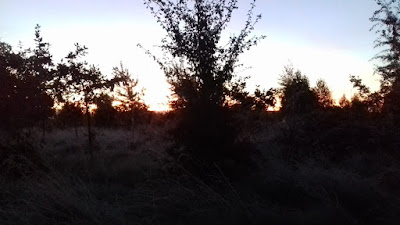 I just had to show the guys the sun starting to rise. It was truly awesome. It always is. Breakfast was pretty ace too - more sausage! The sausages took longer to cook, presumably because the gas didn't like the cold. We were changing gas cans like crazy, warming them up in between changes. 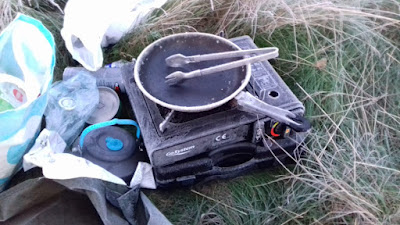 Rob's cooking gear was proper frosted over. Maybe next time we'll take an alcohol stove. Maybe we'll invest in hooped bivvy's too.  A hooped bag would maybe allow a little more room for my head and prevent the top of my sleeping bag getting wet with dribble and condensation. Ron needs to change his zipped bivvy as a seam has gone. Research suggests that our closed bivvy's may contain high levels of CO2 - I worry more about the methane levels! With all this excitement of bivvying, Ron and I decided we will try and complete the 'bivvy a month' challenge. So, thus far, September bivvy completed - 1/12. 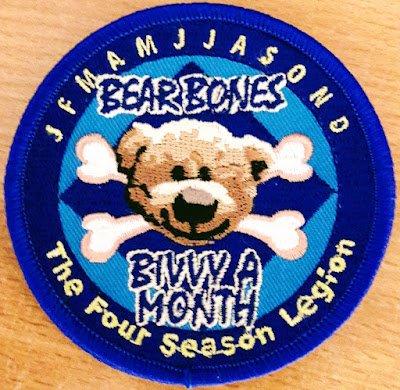 Cycling adventure was also had. I recently got a new bike (did I mention this in my last blog post?), that I have named 'Psycho'. SJ feels I should have named the bike after her and called her 'Sexy Sarah'. My bike is sexy and I've taken her on some psycho routes.

The most crazy route my new bike has travelled so far was a rendition of the CotsDURO 18. The CotsDURO is a route I stole from the racing collective. As the website states, CotsDURO is a 100km self-supported no frills road-gravel.  It is a gentle gateway into the national XDURO trials.
The route showcases the wonderful variety of singletrack and doubletrack, highways and byways of the Cotswolds across its rolling countryside and the saw-tooth profile of the Cotswold Edge. 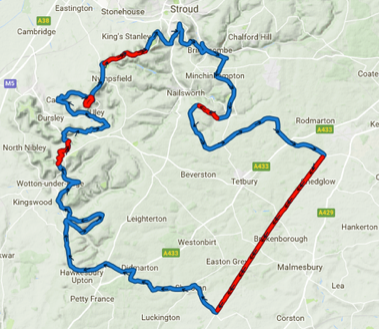 This ride was pretty awesome and as can be seen by the map above had 5 'race segments'. Being the idiot I am, I didn't race any of the segments because I cycled the route the wrong (i.e. reverse) way around. D'oh! Funny thing is, I was still near tops on a couple of segments, just saying...

I wasn't racing this event to be fair. My plan was to test the ride out and then invite a group of my mates to cycle this same route with me at the end of the month. My hope is that all will like this route. Hmm, I enjoyed it. However, this route was very hilly in places and contained some hike-a-bike sections.

Must have cycled about 2,100 metres. If this were cycled the correct way around that would reduce the total amount of climbing by about 300 metres. Are folk convinced to try it out yet? 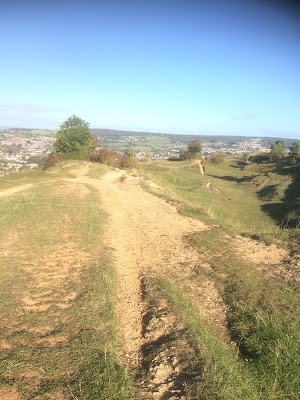 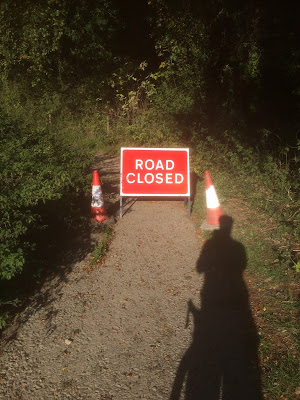 Some sections were closed. Allegedly. Closed to some, I guess. 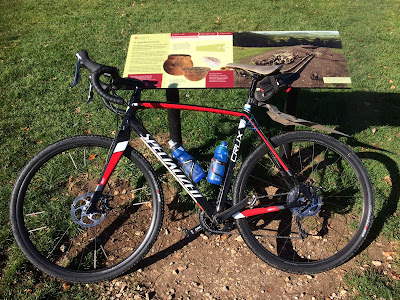 Psycho performed well throughout. Well enough anyway. Psycho, despite being new, is far from a top-end bike. She has an aluminium frame and relatively low-end (Tiagra) group set. I ran 33mm tyres which were ok but I felt fatter tyres would be a better option. 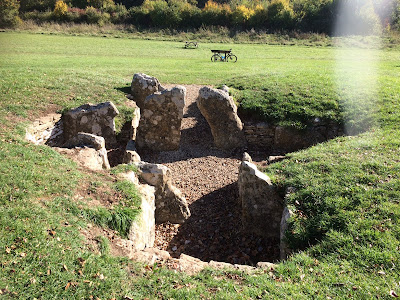 Pretty awesome how the route passed through Nympsfield long barrow. I love stone circles and such like. I also passed Hetty Pegler's Tump (another burial chamber) that perhaps can be looked at more closely on the group ride? 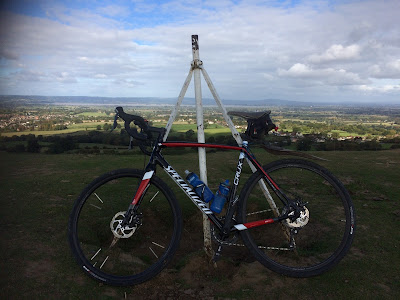 The pic above was probably at the highest point. This was a ring-twitching descent for me. I guess an impossible climb the correct way around. 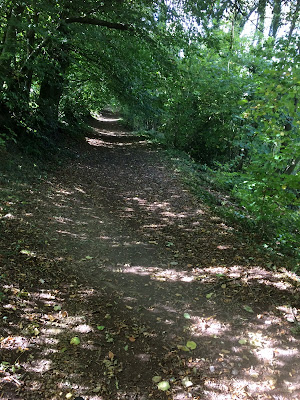 Much track ran through forest. These tracks were pretty ace. Running parallel to a lot of the forest tracks was tarmac road. A road option would allow folk to speed up should they so desire. 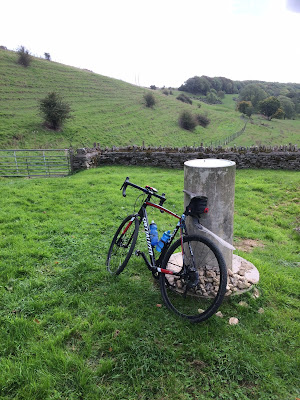 Some sections were clearly off-road and off beaten track. I tucked into my sarnies here (about half-way around). I'd advise anyone doing this route to take a packed lunch as there is little in way of food stops the whole way around. 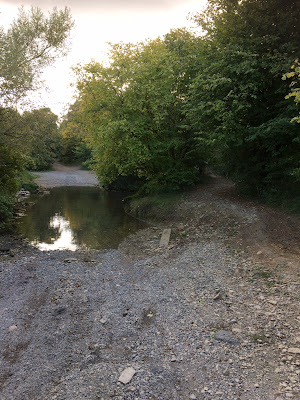 A long section (about 13k) was pure flat and relatively fast gravel. Easy to navigate and completely traffic free. These were by-ways and they crossed over several main roads. If I had cycled this route the correct way around then essentially the first 55k or so would be relatively flat (except a little climb almost right at the start). Once at the 55k point there are options to battle the hills, or take a tarmac road back to the start or miss odd sections of off-road by cycling tarmac. I enjoyed this ride though consider it tough. It must have taken me about 9 hours all in, I was initially guessing around 7. I wonder what difference a group ride and cycling correct way around might have - anyone want to join me and find out?

Adventurous times for sure. And, adventure awaits! If anyone wants to join me on another rendition of the Cotsduro18 (planned for end of month) or a bivvy in any given month, then please contact me. As for Pilate's, well, that's a me and my Mrs kinda thing.
at October 06, 2018