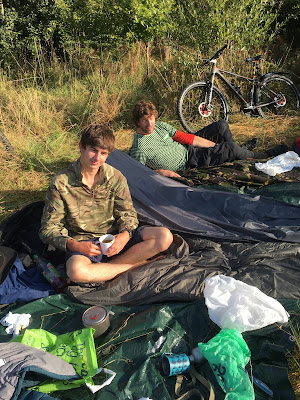 Woo Hoo! Completed another BAM (Bivvy-A-Month) and only have 4 months remaining until my challenge is complete.

Ron and Rob dog accompanied me on this August BAM. Better yet, Ben (Rob's son) came along too and made his debut to the wild camping world. Super cool.

Not everything was super cool though, oh no. All started well. The weather was tip-top, super warm and dry. We found a suitable destination spot without too much bother (secret coordinates: waltz.distorts.courier). Camp was set up without any major issue and Ron and I were to test out our new 'Outdoor Research Helium' bivy's. Then, 'ring ring', Rob took a call and had to leave camp to sort issues with his car alarm which was alarming the street where it was parked.

Couldn't let Rob dog go on his own, so I sped off with him. Sorted alarm, (further) sneaky pint at the Lark and back to base camp. The camp spot looked just awesome in the dark - so many stars in the night sky and a bright (not full) illuminated moon. We saw some shooting stars which is always great too. 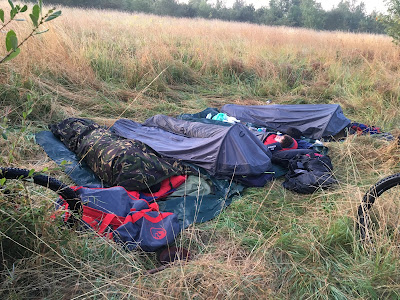 After much socialising, listening to music, telling stories, cooking food, drinking 'pop' and sharing jokes we all fell asleep under the starry sky. I think we all slept relatively well. Ben was the only fella who didn't make noises snoring. 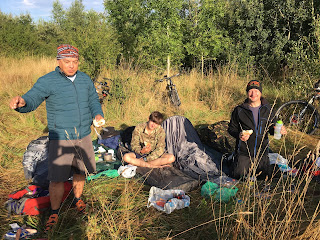 When morning came it was a super bright affair. The sun was starting to rise and it looked a brilliant day. Breakfast was soon cooked and devoured. Ron and I were able to provide feedback on our new bivy's. 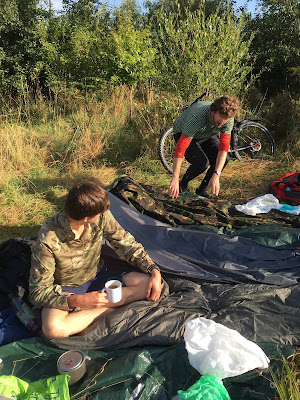 Essentially, both Ron and I were 'disappointed' with our new bags. I suffered just a little condensation around the hooped hood and nothing worse. I've never had condensation issues before with any bivy that I have owned. My bag was roomy enough and the weight and pack size was amazing. Ron commented that 'the jury's out' and his bag did not perform great at all - his sleeping bag was wet. Ron preferred the more spacious army hooped bivy's we have camped in before but said as an ultra-light option this bag might suit. Hmm, so future camps? I think I will revert back to my army hooped bivy for local wild camps (where bulk and weight are not such an issue). I think (and hope) for long distance cycling my OR bivy will prove great and I will benefit from the minimal weight and pack size. Next week I plan to take it to Wales and try a further wild camp. I'm going on a long distance trip all being well and will not take a sleeping bag at all (to save weight) but will still take an air mat and silk liner. I also think that, perhaps, my PipeDream 200 Hydrophobic sleeping bag would suit this bivy better simply because of the condensation issues. I guess we will find out.

All in all, a great camp. Great company, great food, great views. A bike-packing, wild-camping, whisky-drinking, son-of-a-gun, has stories to tell!
at August 25, 2019