Last month was pretty great and lots adventure was had that included running, camping and cycling. I had lost weight and was feeling generally uplifted despite all the Covid chaos. A particular high-light was the SIKA race that I had entered.

This month has started pretty great too. I have won 2 prizes for cycling related events - how cool is that? The first prize won was a pretty naff water bottle courtesy of Cycling Heroes. I started using this cycling app a while back as it helped with motivation. I think I had to cycle 50k, or an hour, or something like that to be entered into the draw. 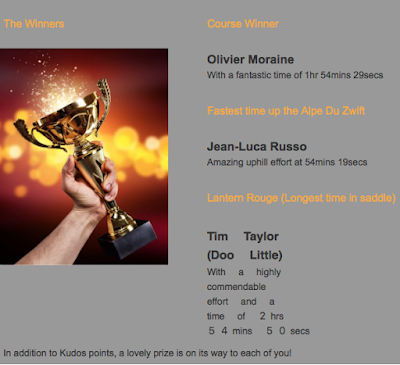 The second prize was better yet, as it was completely unexpected. I've won a prize for being the Lantern Rouge in the afore-mentioned SIKA race. Y'know, the race where my mates dropped me on the climb of Alpe Du Zwift! Ha! Never have I been so proud and pleased as punch to finish last. Zero the hero! (Have no idea exactly what I have won, will reveal all when I know).

I've been really quite pleased with my new smart turbo trainer. I've not had it long and already it's told me I have a FTP (Functional Threshold Power) of 245. An FTP of 245 is only kinda average but, hey, it enabled me to take a virtual place on the SIKA podium and we all know it takes a special kind of person to be a winner!