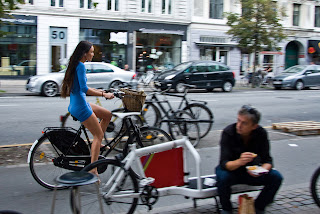 This week proved a little more active than last. Only cycled on 2 occasions, but both days were good days out. Both Cayo and Scotty tasted tarmac.
My first outing was with Ron aka 'Aldi Kid'. Ron has this new nic name because he has recently purchased a whole outfit of cycling gear from, you got it, Aldi. The Aldi range is pretty good to be fair and they release new stuff each winter and summer time. Ron and I took our mountain bikes along the familiar 'Deer Route'. I think we were both quite whacked this week and found it a little struggle. We didn't race at all and by-passed a few hills we usually tackle. It was nice to be back on Scotty - felt like I have neglected her of late. Pretty awesome to use our super ay-up lights now that the days are shorter and the nights darker and longer. The council have kindly resurfaced the road around Coughton Ford too which was nice. 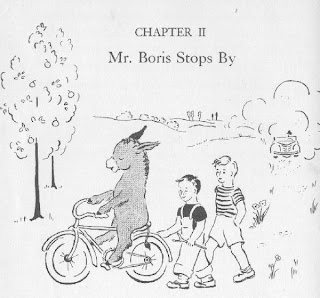 The second outing involved the use of Cayo, my road bike. This trip was pretty awesome, as it was a kind of re-union with the LEJOG 2010 boys (plus Hannah). The full team were not present - Ben B and Nathan (the Fuji boys) were missing. However, Guy, Chris, Ben A, Steve, Ian, Dave and myself all met up in Bristol to tackle the 'Tasty Cheddar', a 101k audax event. This was my 8th audax event.
The day started off in the usual style - mishap! I had only cycled 1/2 a mile before Ben phoned to ask if I had a track pump. I returned to the start so that Guy (not Ben) could inflate his tyres with said track pump of mine. Guy was doing this audax on his mountain bike, as his road bike had a wonkey wheel. If my memory serves me right, Guy had a wonkey wheel at the end of the LEJOG 2010 experience. Story has it that Guy purchased new spokes to replace his broken one's but they were the wrong size?! Anyways, after this false start we were off.
Guy had the right idea to bring his mountain bike! The start of this ride was on a muddy cycle path, well suited for a cyclo-cross event. I don't think Cayo has gotten this muddy before. Cyclists, runners, dogs and walkers were all using this path. Not far into the ride, I spotted a random guy bopping along with a bike wheel attached to his back and another guy hacking down a tree. This first part of the cycle passed under the Clifton Suspension Bridge and went alongside Clevedon (where I remember swimming as a child, and remember Cody taking a dip on a visit with my friend Jet) and finally finished at the first control - a cafe facing the sea front. Very pretty indeed. 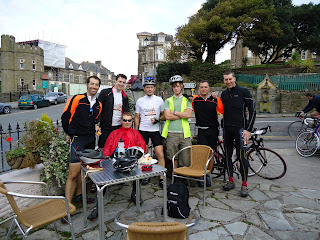 The second leg proved menace for poor Ian. He got a wasp stuck in his helmet which stung him on the side of his head. This trek took us through Axbridge and passed through a lengthy tunnel. This tunnel was dark and the ground uneven. Lights were required to ensure safe passage - I still had the knog light that Chris gave me during the LEJOG 2010 venture. Once through the tunnel, I swear I saw a woman walking 2 grizzly bears (Chris and Ian ensured me they were really just big dogs). This section finished at an ice-cream parlour with signposts pointing to Cheddar. I didn't taste any ice-cream delight, or cheese, but I did eat a pink dougnut. Mmm! 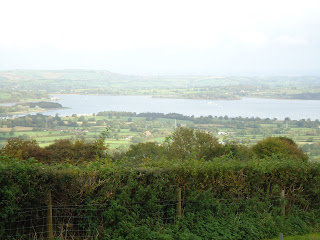 The third leg was extremely pretty. Cheddar Gorge was climbed and the views were breath-taking. The hill wasn't half as difficult as I had imagined. The hill into Hinton Blewett was a real tough one though and not to be under estimated. After this hill was climbed the control was within easy reach.
I was very hungry as I cycled the last section. Had decided not to eat much at all during the day, as we had planned to have a meal together at the end. 2 things kept me distracted from my hunger, these were the smell of chicken poo and a rather odd looking Mr Man type house. This last section took us through Dundry and Long Ashton before finishing at the control, very near the start. Yay, job done! 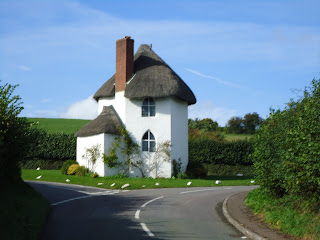 This Tasty Cheddar audax took us much longer than expected. Sadly Guy and Chris had to leave to attend a wedding. Meanwhile the rest of us (plus additional Cross family members) gorged out on a delicious carvery - a nice finish to the day.
Cycled a distance of 61.67 miles at an average speed of 11.9 mph and a max speed of 40 mph.

In addition to the above events, photo's from the Hay in a day audax were published. Below is a pic of Ron and I cycling said event. Wiggle remain in my bad books as they have still not replaced my broken band for those Tacx rollers. Such menace. 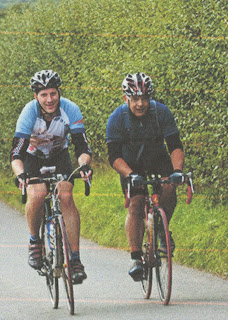