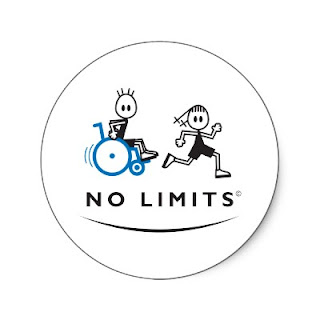 Perhaps I should start setting limits on how far or hard I train?! Really pushed myself at the start of the week by tackling a 10 mile run with SJ! This was the furthest SJ has ran to date. We followed the Lover's Loop and added the 'extra chunk' that I checked out on my bike last week. This mapped route looked like 2 hearts held together by a strand. This was far from a lovely route though - both SJ and I felt some discomfort before reaching the end. The route was hilly in parts too. The following day SJ reported aches and pains, and my right knee was shouting 'know your limits'. 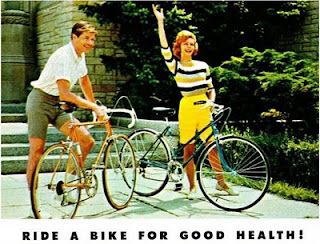 The following night was spent cycling Ron's 1 Hour Loop with no less than Ron himself. We were both on mountain bikes, but it was only I who had slicks. There was a chill in the air and it was very misty round about. As we cycled this route, we saw what looked like a fire in the distance. As we neared this 'fire', we discovered it was in actual fact a gritting truck - the amber flashing lights looking like a fire with the mist screen. Ron said the grit truck driver was actually the Devil himself, just earning a few bob more by gritting the roads over the winter. Tough economic times. I actually felt like one of the Children of Israel once a grit truck had passed and we were following this pillar of fire.
Hooked up with Ron again before the week was out and we cycled the Stroud 5 Valleys 50 Permanent Audax event. The event organiser (Stephen Poulton) had described this event as 'a short ride with plenty of vertical-seeking interest'. This event was only about 50k long, but included 1,174 metres of climbing to award us with 1 AAA point!
We started this event in Stroud on a sunny day. Ron had followed suit and kitted his bike out in Shwalbe City Jet's too (though his were a thinner version than mine). Almost straight away we encountered our first hill which, like all the rest that followed, was pretty tough. The descent into the control at Haresfield was tougher than the climb - it had a 25% gradient and much dirt and debris covered the road. Ron nearly clipped a red postal van at this juncture with his braking and back sliding technique!
From Haresfield﻿ to Painswick we encountered a 1:6 climb. We reached the control in good time and considered having a breakfast. The breakfast sadly didn't arrive - the 'cook' was way too leisurely and we made haste. 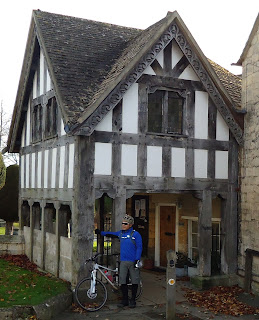 Our hasty action didn't last too long. Not far from leaving Painswick we hit a 1:7 climb, followed by 2 further big climbs before we reached the control in Bisley. On route I stopped to ask an old lady directions - she screamed and jumped back about a foot before she directed me. Her scream made me jump back. I think we both aged a few years during that engagement! Bisley control was nice - we stopped and ate at The Bear pub. Ron opted for a curry and I had steak. As suggested by Stephen Poulton, I got a stamp from the Post Office to prove my proof of passage. It was a cool stamp, picturing a cyclist with the words 'keep it up'. 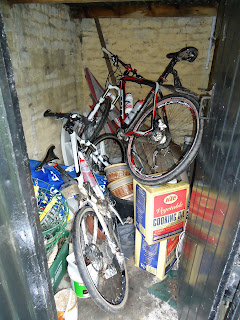 We did keep it up and cycled a further 2 ascents until we reached the control at Minchinhampton. Very pretty here but hard to get a receipt as there were few shops and the first shop I found was empty! Had better luck at the second shop. 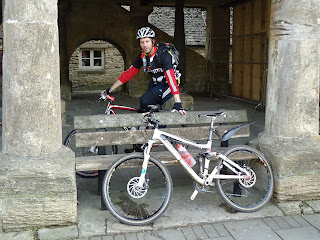 The ride from Minchinhampton to Nympsfield was a bit of a drag. Not seriously hilly, but ascending all the same. We were facing a headwind here too and everything looked a bit bleak.
Relatively easy from Nympsfield back to the Arrivee at Stroud. It was mostly down-hill and super zoomy it was too - Ron was overtaking motorised traffic at one point! Our final ascent of 77 metres came just in time, as we finished our adventure just as it had started to rain. We cycled a total distance of 34 miles during this permanent. Woo hoo, job done. 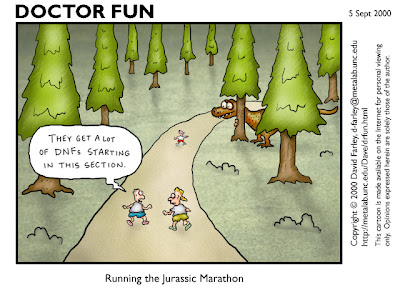 Finished the week's training with a jog. Cody, SJ and I scrambled our way around the cross country Handlebar Route. The fields were quite slippy due to a recent downpour and mud stuck to the bottom of our shoes and paws. Wonder how the winter months might affect our training?
Weekly totals: Cycled 53 miles; Ran 13.5 miles.
at November 27, 2011