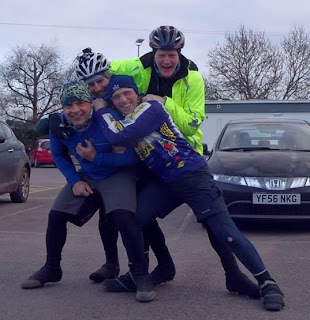 Was so great being 1 of 4 muppets to go out in -8 degrees Celsius last week and battle some big hills. With that thought in mind I used The Muppets to inspire my training this week. Indeed, I purchased the first 24 episodes on DVD and span on my rollers watching the same. By the end of Monday's spin, I had seen 4 episodes. 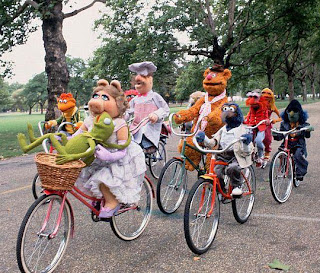 Tuesday was run night. SJ and I ran a great run of just over 10 miles. We ran a similar run to what we completed about 2 weeks ago but in reverse with a few additional twists. From Doo Little (my abode), we ran to Arrow Vale Lake and considering it was about 6pm we couldn't believe how light it was. There was a full moon out tonight and it was illuminating our icy, slushy path. Yup, the track we were following was still largely covered in crunchy icy snow. We felt fine by the time we reached the lake, so on we ran all the way to Redditch Town Centre up a big lengthy hill past the college and then had a brief respite as the track descended to the buss station. From here we still felt relatively ok and ran what seemed like a never-ending hill that finally reached to the top of the Slough. We were starting to feel a little chilly now but felt ok, especially as we knew these last 2 miles were downhill and led back to Doo Little. Reached home and wow, the only pain or problems we experienced were swollen feet. A big fat kebab and a hot bath later and we both felt fine.
Cycled on Wednesday. Had always wanted to cycle the Breadcrumb Trail in the snow and this was my chance. Most of the snow had gone but what was left was crunchy icy snow, covering about half of the trail. Reached the trail by cycling across naughty fields first, much effort required as the snow proved to offer resistance. The main road in Alcester leading to the Breadcrumb Trail was still closed to motorised traffic. Once I had completed my circuit around the trail, I spotted another cyclist just entering the woods (I think he was taking the regular route and avoiding the awesome trail). Went home via the Dovecote and Coughton Ford. The downhill track leading to the Ford was great, my bike smashing through lots of iced puddles making explosion like sounds. Once past the Ford, I spotted the same cyclist I saw in the woods - he was cycling on the main road - not a good idea in rush hour traffic. I continued my journey home through the country lanes. It was sub zero by the time I reached home and hence decided not to go out cycling again that night, as was previously planned. 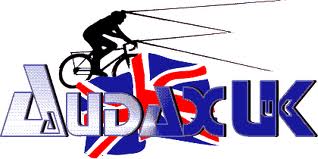 Ron joined Audax UK (AUK) this season and we were both glad to see we were awarded with AAA points for last weeks Cotswold Corker. Ron had just received his first Arrivee magazine and AUK handbook. Bigging myself up here a little, but am pleased to blog about my fame in said publications. 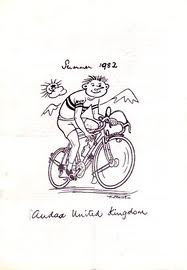 The AUK Hanbook 2012 records 7 awards that I received. I was 1 of 438 AUK members to be awarded a 2011 Super Randonneur award (for completing a series of 200, 300, 400 and 600k events in the same season) and 1 of 322 to finish the PBP. The Randonneur 5,000 award was gained because of the 50 points I gathered for riding events totalling 5,000 km in a season (awarded to 110 members). I was 1 of 396 members to receive the Brevet 1,000 award for cycling 5 x 200k events in one season. I was 1 of 141 members to be awarded the Brevet 2,000 award for cycling 20 x 100k events. My name was included as 1 of 45 members in the AAA Roll of Honour for obtaining 20 AAA points (currently have 34 AAA points). Name also included in the AAA Super Randonneur list, as 1 of 14, for completing a SR Series composed of AAA events in 2011. My final acknowledgement was where I appeared as 1 of 306 members on the Randonneur Round the Year (RRtY) Roll of Honour for completing a validated BR or BRM event in 12 consecutive months. 2011 was a fantastic season and will most probably be my best season ever. 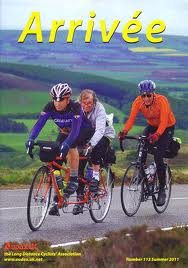 Arrivee magazine (Number 115 Winter 2012) welcomed me as 1 of 120 New Super Randonneurs. Perhaps my most pleasing entry in the magazine was for being 1 of 250 riders who earned 12 AAA points or over in 2011. I earned 27 AAA points for climbing 27,150 metres and was at position 51 in this list. This achievement amazed me as my hill climbing is far from great.
Had my eyes tested this week and am glad to report they are fine. Have not suffered with any headache this week (as yet) either which is great. And, I have not vomited - bonus!
Took to the rollers again on Friday. Span my usual distance whilst watching more episodes of The Muppet Show. Have now watched up to episode 6. Last week had concerns that my rollers were packing up because they were as noisy as an Aston Villa vs Queen Park Rangers football match. They are still real noisy...
Had planned to run on Saturday but my new shift pattern left me feeling tired and sorry for myself. SJ ran about 6 miles in my absence (and Cody 3 miles). Made my self better by listening to 'the girls' stories over a bottle of wine and DVD.
Sunday was back to work. Ugh, I feel like I live there at the moment. At least I'm able to think about stuff when I'm working ... and I have been thinking about completing another Super Randonneur (SR) series this year. This is only thinking at present, the thought of having to complete a 200, 300, 400 and 600k audax this year is quite mind boggling. However, my thoughts are as follows: Complete the 200k Sam Weller's April Foolery - this is a Black Sheep event that I have not rode before (maybe new this season). Of all the rides I have ridden, the Black Sheep events are highly rated. My 300k event would be the Rough Diamond - Mark Rigby, the organiser of Black Sheep events said that this was his favourite 300k event. The 400k audax would be Brevet Cyrmu, another Black Sheep event. I rode the Brevet Cyrmu event last year and got seriously lost adding about 30k to my ride. I'd like to ride it again, ensuring I navigate better and get a photo of the longest place name in Wales which I managed to bypass last time around. Sadly, my thoughts are not thinking of completing a Black Sheep SR series (like last year). All the Black Sheep 600k events are seriously hilly affairs. This time around I am thinking of completing the 3 Coasts 600. The 3 coasts 600 has <2 AAA points (as opposed to the 8.25 AAA points of the Black Sheep Brian Chapman) and sounds awesome, as it's name suggests passes 3 coasts. The 3 Coasts 600 also includes cycling England's longest continual downhill road back to the headquarters. Thinking is dangerous, huh?!
Would like to end this blog with a photo SJ has given to me. She reckons I see far too many 'birds on bikes' and wants this one added to my blog. Maybe I'll get my bird back on her bike soon .... 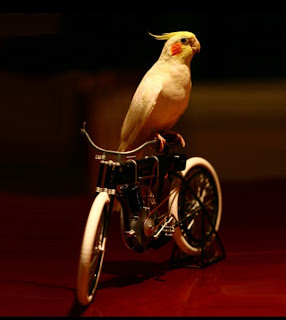