Southern Discomfort and other stories about the Easter bunny

Last week started with the now usual to work and back commute. Lin's Garmin continued to play up during my first commute and wouldn't start until after a couple of k were cycled. Once home, Strava reported the ride to work was ridden on 2nd August and not the 10th. Had the Garmin gone wonky or was it Strava?! Maybe both. Once home, Lunar was excited to show me a picture she had drawn for me. It was a picture of my lovely cycle. Bless her.

Cycled to work and back on 3 occasions during the week. Garmin was replaced by my TomTom for the second 2 commutes. My real adventure began during the Easter holidays though. 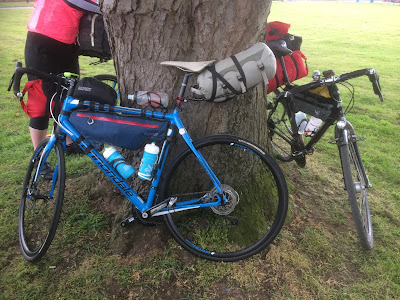 The Easter bank holiday really was a lot of fun. Chris H, Jamie, Andy (Toll) and my good self went for a bikepacking adventure from Windsor to Windsor. Chris had planned the routes and dubbed the adventure 'Southern Discomfort'. This was a 3 day adventure that covered just over 300k of mostly off-road mayhem.
Day 1 'The 3 castles path'. Seeing as Chris lived in Windsor, we all met up there for the start of our adventure. Chris was quite the tour guide initially and provided much information about 'the sights' as we went along. It wasn't long until we passed Windsor Castle, the first castle on the 3 castles path. 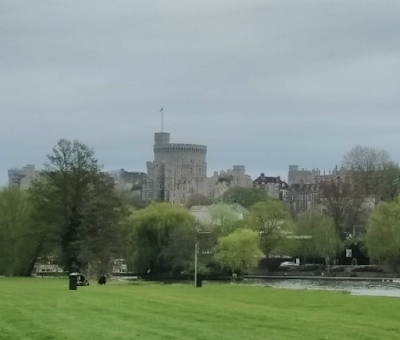 In between castles and throughout the day we cycled lots of single track, path, gravel, fields, tow path and it was all pretty amazing. Weather was pretty fine throughout and our first food stop was okay. Hot dogs all round. 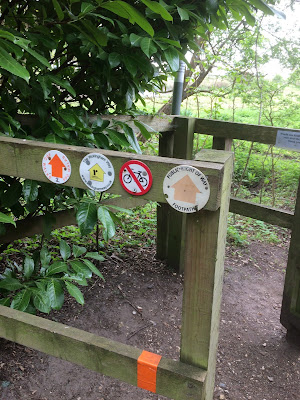 The second castle we reached was Odiham castle. This castle looked liked it had melted or something. Pretty all the same. 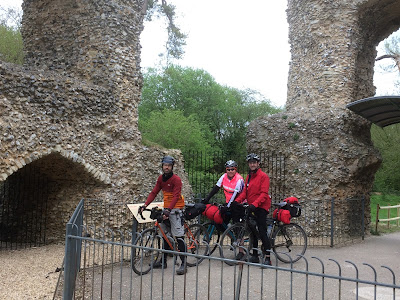 Throughout the next section I remember we caught up a rather unsocial ginger cyclist. I don't think he wanted to be caught - we soon stopped following his path anyway - however, we crossed his path a little further along that day. 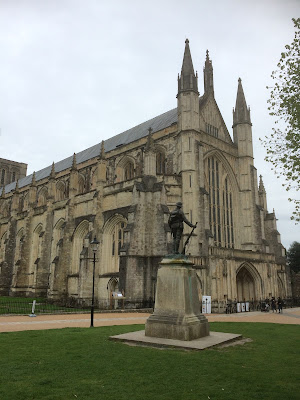 Once we reached Winchester, Chris our 'tour guide' proudly announced that we had reached the end of the 3 castles path and pointed out Winchester Cathedral. I felt robbed, 3 castles path but we had only seen 2! Jamie and I cycled just a few metres more and found Wolvesley Castle.
We felt like we had really cycled a 3 castles path now and that was so the highlight of our whole bikepacking adventure. Chris mumbled something about it not being the official castle and spluttered something about a great hall. It was clear he was oh so jealous about not viewing this delightful hidden gem of a castle.

We all came together again and reflected on our awesome first day over a feast at a local 'spoons pub. All was great until Chris had noticed that his and Jamie's mixed grill did not come with eggs. No eggs! What?! This was Easter after all. I had words with the 'egg girl', who in turn had words with the manager. The result - 2 free desserts! Bonus! I asked for 4 but only 2 materialised. I enjoyed sharing Chris's ice cream and crumble - it complemented my chicken noodles just fine!

Our day ended by cycling to the start of the South Downs Way. Here we (Chris) found a stealth place to camp down for the night. Tarps up and soon the sound of snoring after a little tipple of port from the hip flask.


Day 2 'the South Downs Way'. This day began about 6:30. Had slept pretty well considering the snoring and trumping of my buddies. Cooked up a nice porridge and washed this down with a tasty brew before we cleared camp and headed off.
Chris and I had cycled this route before on our mountain bikes. Lots of beautiful track but rather hilly throughout. Big climbs and fast descents throughout the day. Just to make things more interesting, decided to ride my bike with brakes that didn't work.
I think some random walkers were impressed (or thought 'such lunacy') with the speed I sped down some cobbled, gravelly descents - truth is, I couldn't slow myself or stop. Not sure what Chris's excuse was... Both Chris and I were stopped by a fence at the end of at least one descent. Still have the scars to prove it! - a barbed wire fence was my buffer! I reached speeds of 62.7k today and Chris 67.2! 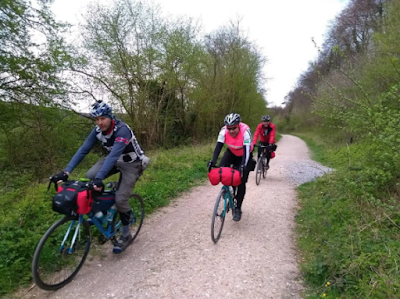 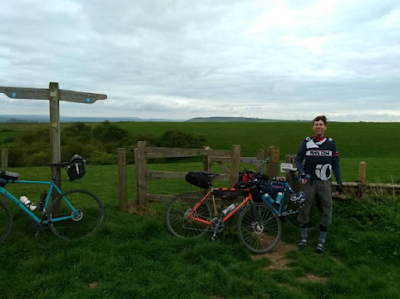 Lunch stop today was pretty amazing. We found a great pub that served up a mighty fine ploughman's lunch. Cheese so thick, oh man, was worth cycling all the hilly k's just for this.
The next stop was great too. We tasted the delights of Caroline's ice cream. Mmm, much better than Kevin's cream!

Not everything was fine and dandy though. The puncture pixie visited a few times throughout the day. In fact, by the end of this day, I had 2 punctures, Andy 3 and Chris 1. Jamie was the winner and had none. 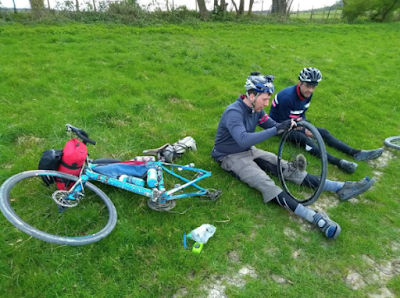 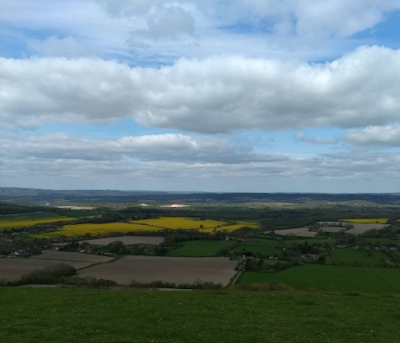 Today was tough. After 80k of tough tracks we decided to leave the off-road tracks and cycle a stretch of tarmac instead. Good choice - the tarmac led to a pub where steak burgers and rum followed!

The camp spot tonight was on the grounds of a girls school, hidden between some trees. I had spotted the site on route to the pub - good job Andy and had remembered how to get back there. Tarps up and into bed after a quick swig from the flask. Jamie won best tarp set up again. Jamie really was the winner (best tarp set up throughout and zero punctures).

Day 3 'flat is the new fat'. I was first up again today. Breakfast was mighty fine, Heinz pasta and noodles. Delicious! 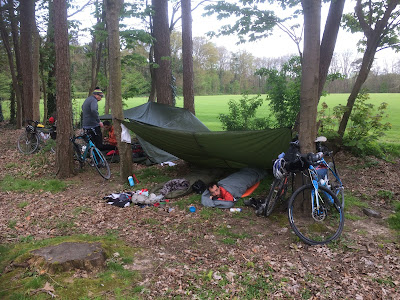 After packing up camp, Chris fitted my bike with new BB5 brake pads and wow, my bike was transformed. Working front brakes, wow, that really was a new experience.
Today's route was much flatter than the previous day. The roads were still gravelly though and the sights most beautiful. My bottom was starting to feel it had been sat on a saddle for a long time now. 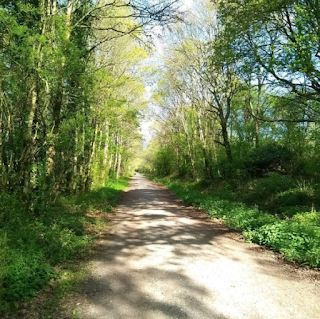 There was still some mad fast descents here and there and a couple of tough climbs too. Somewhere during this adventure my glasses broke and went AWOL. This became a real problem on this day as a bug got caught in my eye during the descent. Chris managed to get the bug out after a few pokes.

We stopped at a lovely cafe for lunch. It was called the Milk Churn if I remember correctly? Here, we all devoured some tasty cheese on toast and drank tea. A few other cyclists were gathered here too - one cyclist had an artificial leg. Don't think I could have cycled this adventure with only one leg. 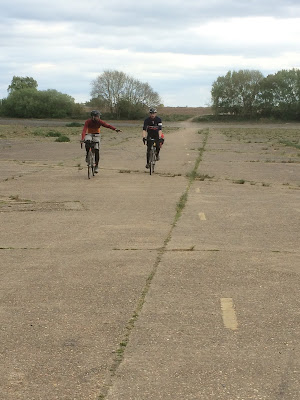 The route was quite diverse and at one time we were cycling through what must have been an air strip. Hard to believe that the long roads we cycled were largely traffic free, in the middle of nowhere and just so awesome. 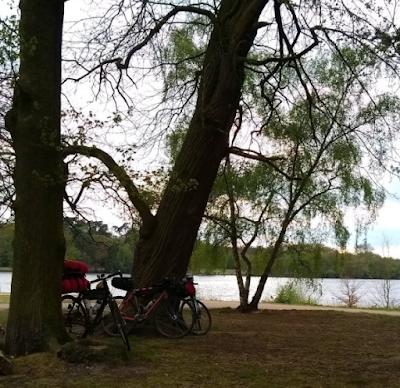 As we neared the finish, we stopped in Windsor for another ice cream. Well, we were on holiday! Pretty sure we burnt enough calories over the past few days.
Last push and we were almost where we started. Windsor Castle looked just as great at a distance as it did close up. After just a few k we were back at Chris's domicile. All agreed this was a fantastic adventure. Cheers to Chris, Jamie and Toll - they all rock!
at April 18, 2017