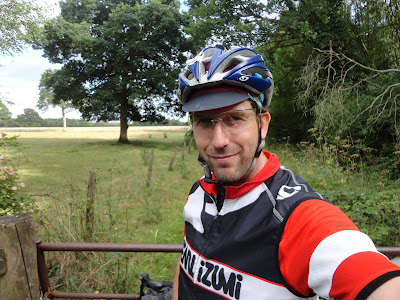 Great week on the cycling front. Froomey lost his yellow jersey (in the Tour de France) but re-claimed it before the week was out. And, better yet, I managed to cycle 350k throughout the week.

First adventure took me to my blind buddy Rogers abode. Once at Rogers, I climbed off my bike and climbed onto his tandem. Then the 2 of us cycled to Whitlenge tea rooms and back. The cafe had been refurbished and pretty fine it looked too. Our mega breakfasts were genuinely mega also! A great adventure on a lovely day. Back at Rogers, climbed off his tandem and back onto my bike. My bike then took me to Evans Cycles in Birmingham for it's first free service. Was nice cycling up the towpath which used to be cycled with some regularity on my old commute when I worked at C-SPMH. Whilst bike was being serviced, I decided to pop into said C-SPMH. It was great seeing some folk, however, my evil nemesis 'KB' was as miserable and mean as ever and made failed attempts to have me evicted and prevent future visits. Ha! Whilst in the building the heavens opened but stopped as I left to collect my serviced bike. Newly serviced bike (my Genesis) then took me back home. Whoa, what a lot of adventure for a Monday!

Next cycle was midweek. This was my now regular new commute into work. A nice 51k round trip.

Friday was a great day. I cycled into work using my 'winter' bike, which was loaded with all my camping gear. After work, loaded bike was cycled to Chipping Norton campsite. Route to campsite was super and not what I expected. Lovely country lanes were followed and the massive climb of Fish or Saintbury Hill were avoided.
My route also took me on a few off-road sections which was fine until stretches of bramble and stinging nettles attacked my bare legs! Pleased to inform I survived and found my way to campsite with no further menace. 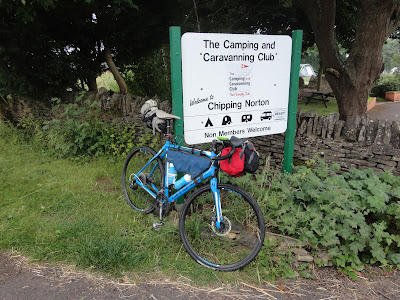 The campsite was great and had super nice clean facilities, not bad for £7. Pitched my tent and felt great once my camp was set up. Sadly, I had forgot my hip flask but no real bother - took a quick cycle into Chipping Norton centre to purchase Whiskey. 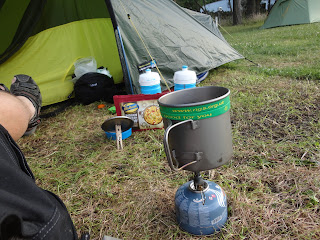 Back at camp, decided to cook my dinner. Dinner was a 'new to me' freeze dried meal of the Bla brand variety. I poured in the hot water and left it for 10 mins but I forgot to stir the meal. Grr. When I reopened packet, I could see the meal was still dry and powdery at the bottom, where I had not stirred it. No bother, I added some cold water (the remainder of the hot water I had boiled made me a jasmine green tea) and stirred. The meal tasted great, it really did. Surprisingly, the meal was real filling too, so much so, I must have left a couple of mouthfull's. The other menace was I had lost my prized titanium spork (and knife). Luckily, my breakfast meal had a plastic spork included with it so I used that. I miss my spork... 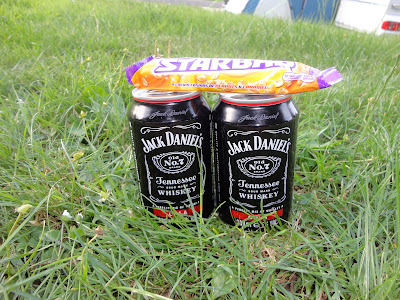 Dessert was Whiskey and Starbar. Nice. Whilst drinking made a call to the Mrs and kids. More whiskey and into bed for a great nights sleep. 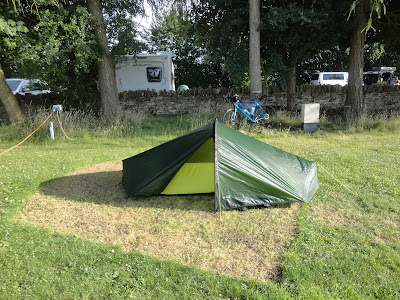 Awoke early after a relatively good sleep. Made breakfast and tea. Breakfast was another new to me rehydrated meal and it tasted nasty - it was still cold. Maybe I should have left it longer. This was a 'Beyond the Beaten Track' meal which apparently self heats. Mine didn't - not enough anyway. 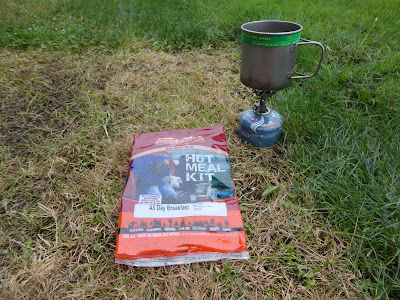 It was raining now too and things are never so rosey when the rain pours. Took a shower which made me feel better for a spell. Then I had to pack away my wet tent. Not sure of best practice for packing away a wet tent. Left this wonderful campsite at about 8 a.m and was looking forward to meeting my Mrs and kids et al at Burford Wildlife Park.

The rain was cold and wet initially but at least it wasn't heavy. The scenery was super as I cycled to Burford. Passed places where my family had visited before. We still have the robot water bottle we brought for Lunar, purchased from here. I even passed the pub where Lunar flooded the leather seats with urine. Just before reaching the wildlife park, I passed a burger van and managed to resist... 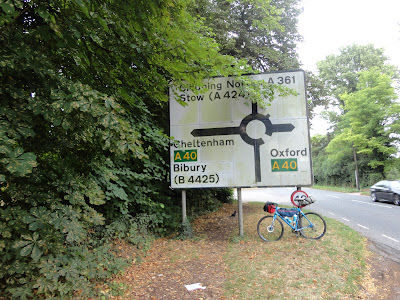 Reached the park at 9 a.m which meant I had an hour to wait. Cycled back to the burger van and munched on a 1/4 pounder with egg. Yummers! Back to the park where I met SJ, kids et al and had a great day fraternising with others and looking at wild animals in the wet. By the afternoon, the wet weather ceased and the sun came out. Good job, a long cycle home awaited.

Ron was my travelling companion all the way back to my village. We cycled 80k (which I strangely thought was only going to be a 65k cycle). The weather was better than earlier. Cycling was a little tougher than expected and we cycled many hills, much road and a wee bit off road too. Just as I pulled up onto my drive my Garmin crashed (again). Ugh, what a menace to end a great adventure!

Sunday was spent reminiscing about the great week that was had. I'm sure there is great weeks ahead too. The week ended with me finding my prized spork too - bonus!
at July 16, 2017