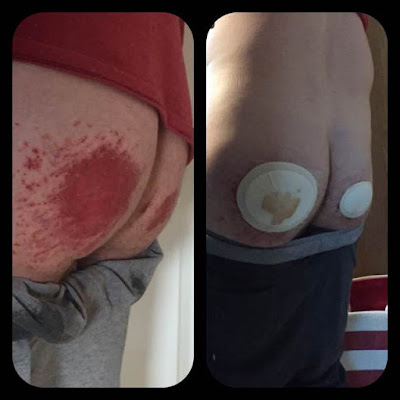 Just for the crack, I thought I'd start this post with a pic of Johnny M's bottom! This clearly shows his dedication to his training schedule. Bottoms up mate! Johnny is (was?) training for an Iron Man event. Johnny hurt his bottom. Don't be like Johnny!

For myself, the past week was a little different to the norm, that's for sure. I started my new job, well, kinda sorta. I have been in my current role since March 2017 as a manager of a mental health and drug misuse team. It's only been since the start of this week that I've been in the correct building. And as for 'real work', well, that's a different story altogether.

Anyways, I made mention to work simply because being the 'new boy' essentially meant that I had no locker or access to the shower facilities initially (let alone my own desk space, computer etc), so was unable to cycle or run to work. However, I was able to run before work and so that's what I did on Monday and Tuesday. No major exciting runs, but a couple of 5k affairs to keep the legs ticking over.

By Wednesday, I still had no locker of my own but had managed to acquire a locker all the same. This meant I could shower and could cycle to work. So, that's exactly what I did - I cycled a new work and back commute for the next 3 days. This was a nice route, cycling about 50k during each daily commute on nice enough roads. It took me about an hour to get in and about 1 hour 10 to get back out. Happy days!
No exercise over the weekend, but fun was had all the same. On the Friday night, I went camping with Ron and Stu et al. We camped out in a forest location near Umberslade. Happy with my new tent, however, experienced much condensation come morning. Spent the evening drinking beer, singing songs, cooking bacon and sausage, melting mallows and chanting 'Dads Camp' at frequent intervals. I had often wondered what would happen should one throw a full can of coke onto a roasting bonfire. Thanks to Ron, I now know the answer to that question - its napalm death! Ha!
Saturday was spent with Melody at the Bournville Sunday School party. This was a great day where all essentially ate to the max - ice cream, candy floss, burgers etc whilst the little ones played. Was joined later by Lunar and the Mrs. A good day fraternising in a lovely location.

Sunday was spent recovering from the days before. Felt so whacked that I couldn't force myself to the usual open water swim. Have fixed my wetsuit though with this 'Black Witch' stuff ready for my next session. Also cleaned my bike ready for next Fridays adventure which is another (cycle) camp before a Sunday School party.
at July 09, 2017