A course, of course

This week in february has been weird. I blame John Ketley and Michael Fish and their associates at the met office. The weather has been changeable, but constantly vile each time I considered some training. Snow kept John, Ron and I from venturing out for our weekly cycle. Snow and Ice has kept Stu indoors the whole year! And rain was to blame for me not cycling home from work. Work itself has also been menace and I have been exposed to mind tricks that got me to agree to work extra shifts.

However, the specialized managed 1 trip into work this week. Rather un-eventful. Suffered cold feet. Changed the route ever so slightly to include a short sharp hill aka 'sting' at end. 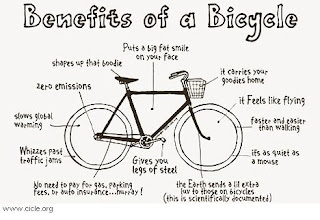 Ran twice thus far. Both runs were identical and followed the well known Studley triangle route. Again, I changed the route somewhat, extending it a little. I now take on St Judes Avenue which adds a little sting and run down to Wickam Road which adds a further sting as running back up to Alcester Road is necessary to return home.

Stealth tactics were employed this week too and as a consequence I have undertaken a new course. Am not sure how I did this exactly. But suffice to say, I have enrolled and completed day 1 of an NVQ level 2 in sports and recreational something or other. Am still not entirely sure what this course is all about and what is expected, but work is funding it, it has 'sport' in the title, it gives me a legal skive of 3 hours a week for 10 - 12 weeks and I get another qualification. I'm a qualified mental health community nurse, so why I'm being allowed to do a sports course is beyond me.
'There's nowt as queer as folk'.
at February 24, 2010