Another great week cycling my acoustic motorbikes (this title was coutesy of Pantalong). Less than 2 weeks today I will be starting my LEJOG 2010 challenge - I think we are officially starting on the friday now and planning to cycle LEJOG in 9 and a 1/4 days. I am planning on cycling Southernmost point of mainland Britain (Lizard Point) to Northernmost (Dunnett Head) point too.

Ron and I cycled our mountain bikes at the beginning of the week and cycled new off road tracks. Was a pleasant run and is always good covering new terrain. We hit some trails previously cycled, but did these in reverse, including the wooded area where the cart once was. We raced up the majority of hills - Ron beating me up most, but I raced so hard I felt sick. Took Scotty out again towards the end of the week and noticed her rear wheel was wonkey. I thought the wheel was buckled, but only closer inspection could see that a spoke had snapped. This cut my training session short and Scotty's rear wheel was taken to Cult Cycles for repair. Cult have promptly fixed said wheel but inform me that I need a new tyre as the sidewall had a big hole in it exposing the tube. All this damage must have been from that rogue nail last saturday. Ron is also having bad bike luck - he rang me today and informed his mountain bike frame had snapped! Scotty's rear wheel awaits collection. 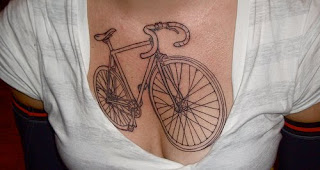 Had better luck with Cayo. Early in the week I took her for a quick 20 mile cycle and then the following day took her for quite an epic ride. This epic ride covered 100 miles and skirted around Warwickshire and Worcestershire and into the Cotswolds where I cycled both Saintbury and Fish Hill. Broadway Tower made a pleasant place to stop and eat beans and toast. This ride continued back into Studley where I cycled a well known circuit with Ron including a couple of short, sharp climbs around Astwood Bank. The ride finished by me topping up to the 100 mile mark by cycling just a few more miles on Ron's rollers and then heading home. Fitted Cayo with new tyres which look awesome. The new tyres are Schwalbe Ultremo's and with the red graphics and stripes have proper pimped my ride! The tyres are race tyres and I chose these not because I wish to race, but have found my previous gator skin tyres were just rubbish. The gator skins punctured and were a real menace to get on and off. These Schwalbe are easy to get on and off and apparently have decent puncture protection properties. Time will tell.
http://www.justgiving.com/le-jog-2010/
Weekly totals: Cycled 162 miles.
at August 14, 2010