This week saw the return to training. Training for the PBP! Can you believe it? Even though exercise has resumed, I have a need to work on my diet (maybe this will be looked at next week) and incorporate more than just cycling.

Monday was SJ's 21st birthday ;), so no exercise took place. However, we went to Alton Towers so that fear and high adrenaline could be experienced. I think this trip aged me somewhat!

Tuesday was the summer solstice and I took advantage of the long day. Took Scotty through Sambourne, across the naughty fields and passed through the Dovecote in Alcester. After this I went through the bit of off road section by Karen's house and down the off road section the other side which led to Coughton Ford. Cycled the cycle track back past Karen's and down the off road track (2nd time) and returned via naughty fields (not so nice in this direction) before reaching home. Am thinking of getting Scotty serviced, replacing the bar with a carbon one and maybe swapping my DMR's for SPD's (again) before the epic South Downs Way Randonnee. Hmmm.

Wednesday was spent indoors on the rollers. Am planning on cycling at least one indoor session per week until the PBP. During this session will attempt to keep my speed above 25 mph throughout.

Thursday was a rest day. Friday saw me cycle just 4 miles! I only cycled because I had to drop my car off for it's MOT (it passed!) and needed a way to get back home.

Saturday saw me complete my 21st audax event, namely 'Mr Pickwick's High Summer Meander'. This was a 215k event, ran by Black sheep Cycling Club, starting out from Tewkesbury. This audax was 'a grand day out - exploring the differing terrains that Gloucestershire can offer. Taking in the Forest of Dean, Severn Vale and the Cotswolds. Finishing where Mr Pickwick supped too much ale'. A map of the route can be seen below: 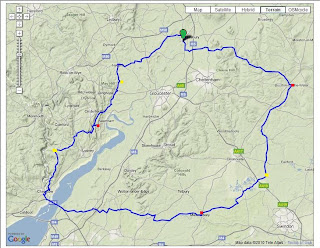 Started the event at 8 a.m, after a couple of banana's and a brief. The organiser told us to look out for sheep, pigs (wild boar) and deer that may be on the roads but none were encountered. Only a bear was seen. This bear was 'Bertie', a bear that SJ brought me to accompany me on my long distance adventures. This was Bertie's first road trip and we have since given him a surname - Bertie Pickwick! The first stage felt like hard work - I think the break from cycling and my added weight made this ride harder than usual. Was surprised to reach the first control, the Dean Heritage Centre as it opened. At this control I had my usual dish - beans on toast, washed down with a mug of tea. 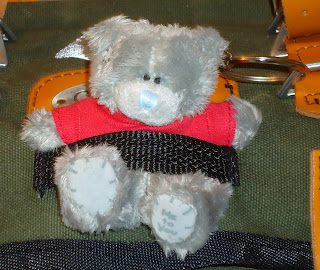 Stage 2 took me to paths cycled during my last audax (the 600k menace) and indeed past the start and over the Severn bridge. I love this bridge and have now cycled across it many times. Beautiful weather all day, the sun never stopped shining. The control was in Sherston (I think) and this 'free' control was also used in the Mad March audax. I ate a relatively healthy lunch for me consisting of a tuna sarnie, sausage roll and crisps.
Started feeling better during stage 3. Ironic that I passed through a place called 'Happy Land'. It had taken me this long to find a nice pace and feel comfortable on my bike. From Malmesbury I cycled to Bourton-on-the-Water which looked stunning. The sun was beating down real hot and loads of folk were having picnics here. I stopped just to eat a kit kat, apple and banana. Did not feel particularly hungry today (unusual) and other than foods mentioned, I only ate 4 flap jacks and 1 gel. 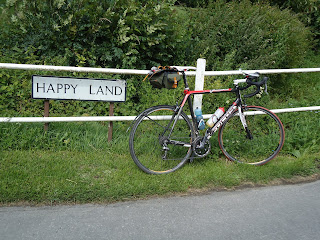 The final stage to the arrivee in Tewkesbury was relatively easy. However, my front mech broke during this stage which meant that the last 30k had to be ridden in lower gears which was a bit irritating. My front mech broke during last audax too. Still, Mr Pickwick and I completed this event and enjoyed our high summer meander.
During audax I cycled 211.77k (my computer stopped working for aprox. 5k) or 131.59 miles if you prefer. I cycled at an average speed of 14.7 mph and reached a maximum speed of 42.3 mph.
Fundraising went okay this week. The British Heart Foundation (BHF) sent me my handlebar rider number (51724) and other paraphernalia. The event I am riding for the BHF is the South Downs Way Randonnee on 30 July 2011. To date I have raised £65 for this BHF challenge. My other challenge, of course, is the PBP where I plan to raise monies for a well to be constructed in Kenya. Further information and details of sponsoring me can be found here:
http://www.agapeinaction.com/tim_taylor.html Many thanks to all who have sponsored and supported thus far.
Weekly totals: Cycled 178 miles.
at June 27, 2011