Am so pleased that monies raised from cycling the PBP have been put to good use already. Is so awesome to know that an area in Kenya has a fresh supply of water because of the likes of you and I. I think the kind words of Brother Justus have had a motivating effect, as this week has seen me train hard and feel back in action. 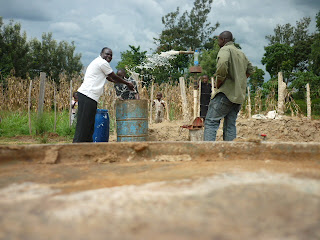 SJ took me and Cody for a run on Monday. We ran the Stinky route, and boy was it stinky this time! As we ran past the sewage works in Studley we had to hold our noses and remembered quite clearly why we named this route so. I think SJ's BMF (British Military Fitness) training is having a good effect on her - she is certainly running faster. I shadowed SJ for pretty much the duration of the run and my average heart rate was a lot higher than usual.

On Tuesday, I completed a 205k permanent audax, namely the Cheltenham Old (Clee) Flyer. This was my first long distance event since PBP and it proved pretty tough. One should never under-estimate a 200k audax! 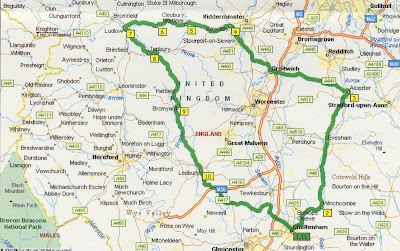 I did not follow the suggested route, instead chose Alcester as the start/finish control. This allowed me to not leave a carbon footprint, as I was able to cycle from my home to the start rather than use my car. This was the first time I ever cycled to the start of an audax.

Left from Alcester in good spirits. The weather was initially pretty fine and my start took me up a well known road, the road we call 'that undulating road' to Astwood Bank. A menace hill was tackled almost straight away (I thought this was going to be a flat route). France was in my head space all the way to the first control as the roads I cycled were long, much like that in France. Once I had reached the control in Bewdley it had started to rain a little. I took shelter in a Bakery and consumed a sausage roll. The ladies in the bakery made me smile - the one asked 'so how far are you cycling?' I replied 'about 200k'. She remarked 'so how many days will that be over?'

Leaving Bewdley cemented the fact that this was not a flat ride. Callow hill had to be climbed (Ron and I cycled this hill on our 'Montgomery Madness' audax) and it's a trifle tough. The route followed an up down up patten all the way to the control in Cleobury Mortimer. I chose this control to eat my staple audax diet of beans on toast.

More climbing took place as I made my way to Ludlow. Clee Hill had to be climbed and this is a tough hill. Spectacular views but 379 metres of climbing in a strong headwind! Argh! Stopped at the control and purchased a (fake) can of Red Bull for stimulant purposes.

Much menace from Ludlow. The route sheet said 'At Rbt SO SP Caynham', but Caynham never appeared. I did not follow the correct route through Tenbury Wells and Bromyard but ended up in Leominster instead. Heavy rain at times. I stopped and asked a couple of guys the best way to reach Ledbury and got to Ledbury just fine, with no additional K's cycled. The one guy commented that my saddle looked painful, and from then on, it was! Stopped at the control and ate my lunch, which consisted of a ploughman's sandwich and hula hoops.

The route down to Cheltenham was great. The sun had come back out and the bike was moving fast. Cycled up Coombe Hill, but this hill was not hilly at all. Just a quick stop here to eat some chocolate.

Short but painful ride to Winchcombe. This was real hilly and Cleeve Hill had to be climbed. This was the first time that I climbed Cleeve Hill from this direction and it was much tougher this way around. Nice to stop for a cup of tea at the control.

The leg to the arrivee seemed never ending. It wasn't so difficult but I figured I just wanted to be home now. I refrained from taking a cheeky short cut to Alcester (wise decision, I stayed off the dual carriageway) and again refrained from taking a cheeky shortcut through Ragley Hall (despite voices in my head instructing me otherwise). Reached Alcester and awarded myself with 2 pork pies. Then I made my way home, ate curry, had bath and crashed!

Wednesday was spent resting. The audax event I had completed had really hit me hard for some reason and I felt stiff and painful. Thursday was spent resting too. I had planned to use my rollers but allowed myself to rest as I was still a little stiff, wanted to 'save my legs' for Saturday's climb of Mount Snowdon and because, well, zombies had eaten my bicycle! 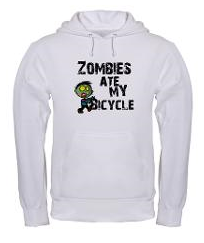 Friday was supposed to be an early night, as SJ and I had planned to climb Mount Snowdon the following morning. According to the weather reports it was going to be heavy showers and major winds all over the U.K. With that in mind, we scrapped ideas of going to Snowdon.
Saturday came around and SJ and I still wanted adventure. SJ took Cody and I to Worcester Country park for breakfast. Following this delicious feed we walked both the 'Woodland' and 'Meadows' walk. These walks were both about 1/2 mile long. The first walk certainly proved thrilling, I had to save SJ and Cody from a killer snake... 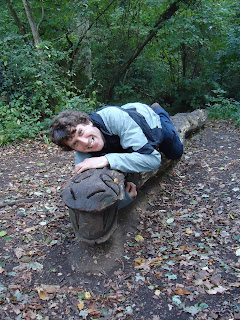 And I also found out that Cody, my supposed Border Terrier, was actually a fox!
﻿ 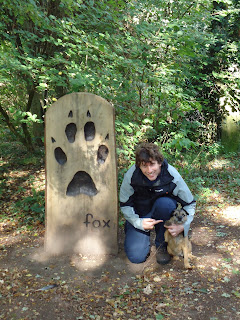 After our adventure in Worcester, we continued to the Malverns for further challenge. Starting at the British Camp, we walked up the hills to the giants cave and continued to the obelisk. There was little rain (grr, should have gone to Snowdon) and it proved to be a great day. Today was also the 9 month anniversary of SJ and I. From the obelisk we walked on through the deer park and dodged arrows from a great number of archers there. Eastnor castle could be seen in the distance as we continued to head for another wood and walked our way back to the start. I think we walked about 3.5 miles in all, but it felt much further﻿ and my poor hoof developed a blister. We rewarded our efforts with some fresh pure Malvern water from a nearby spring (not to mention the rock cakes and tea). 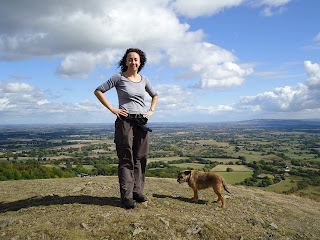