Monday was a mash up day. Had managed to get away from work a bit early and had plans of doing a sneaky run. My plans went to pot, my dear wife SJ had also managed to leave work early. No running took place. Instead, I went with the Mrs to pick up our kids and then onto the chip shop for a big fat kebab. Eating is also a hobby of mine so I guess all was not lost.

Left the house early on Tuesday morning to ensure I got a run in. It was very foggy/misty and very cold. Decided on a cross-country run as the ground would be frozen solid and figured this was would probably provide best footing. The fields were beautiful with all the spiders webs and plant life covered in white frost. As I ran, the sweat/water around my eyes would freeze and my buff got frozen solid too. Must have ran just short of 10k in all. 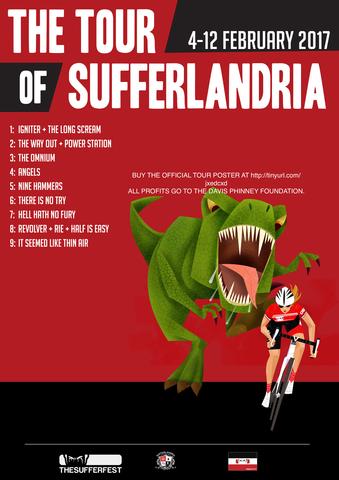 Whilst surfing the internet, I stumbled across a poster for Sufferlandria. This instantly caught my eye as it reminded me of PBP when I had cycled so far with so little sleep, that I started to hallucinate and see dinosaurs. This poster was basically advertising a 'virtual tour' of cycle suffering on a turbo trainer. Without further ado, I figured I would check Sufferfest out. I had a bicycle, turbo trainer and speed/cadence sensors and heart rate monitor after all. It turned out I needed an ANT stick too - no problem I had one. There was a problem however, my ANT stick would not fit into my iPad. This ANT stick did fit into SJ's old and out-dated PC though. I spent ages faffing and cycled very little. The Sufferfest app appeared ok but SJ's computer just ran too slow for this to really work. Wonder if I will get this sorted out before the Tour of Sufferlandria begins. 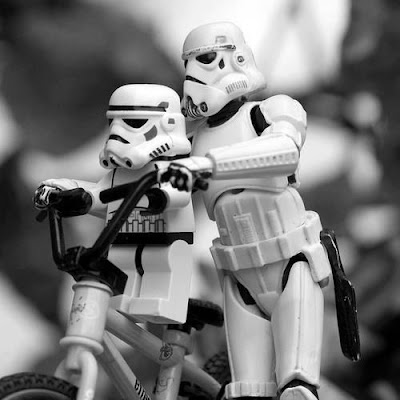 Ran Thursday evening. Just a quick jog around the Studley Triangle. Probably safer than the Bermuda Triangle.
Friday was a far out kind of day. My checks had been cleared ready for my new job, so, I handed in my notice. Work was real busy and I couldn't wait for the working day to end. Once it had ended, I joined Rob and Ron on an adventure to the Woods of Doom. Jonny Mitchum was invited but felt this was a bit hardcore or something. We cycled less than 5k before hike-a-bike across muddy fields and into the woods. We soon found a place to camp and promptly set about fixing Ron's tarp up. And what a tarp - it was massive and covered the 3 of us easily and protected from the pouring rain. It was quite warm this night so no need to build a fire. After much talk and drinky poo's I fell asleep and was briefly awoken at 4 a.m. to the sound of a deer screaming it's bark. At about 6 a.m. we were all awake.
We knew we had to wake early because SJ had given me strict instructions to be home by 9 a.m. because she was pampering herself for the day and I had kiddy responsibilities. Getting up was nice - I brought us all round with a cup of green jasmine tea and Ron prepared breakfast. And what a breakfast it was - bacon bap followed by sausage bap. After being fed and watered, we packed up camp and headed back to Doo Little for more tea courtesy of SJ and a bike clean. Great mini adventure and I'm sure Rob will learn to wrap his sleeping back in a bin bag or similar if it rains again! Shame 'Jane Mitchum' couldn't have joined us. ;)
Ended the week by running a 10k (just short) cross country run over the Studley fields. Frozen in most parts but a beautiful run. Had wanted to run Parkrun yesterday (but unable due to kids) and Hanbury 10k today but it wasn't on. Hanbury 10k is the 4th Sunday of each month not the last Sunday! My cross country affair made up for it. I also took out the skipping rope and skipped a whole 4 minutes!
at January 29, 2017