This week I been mostly a-rollin'. Rollin', rollin', rollin'! I even rolled to Rollright. Indeed, all my training this week was on my bicycle.

Completed 2 to work and back commutes. Is slowly but surely get lighter in the evenings. Mornings are still very dark and it remains dark even when I reach work.

One evening in the week was spent cycling the Deer Route with Ron. Bitterly cold night but thankfully I was prepared and wearing my thermals. I think Ron felt the chills.
My big adventure (and what an adventure it was) of the week was cycling my DIY perm audax. I chose the same control points as on my 'Wot No Cross' audax, however, cycled a better (much improved) route. This 'new route' has aptly bee named 'Rollin' Rollright (28mm).

Broadway was the first control. Reached this destination in good time (had left my house a little after 6 a.m). Not wishing to stop for long, just used ATM for POP (proof of passage) purposes and off I went.

Cold feet just got colder as I cycled through Winchcombe and up and over Cleeve Hill. Always a nice descent down towards Cheltenham. Another ATM provided my second control proof.
The last of the big climbs happened almost as soon as I left Cheltenham. After the climb came a nice slow descent into Cirencester. On reaching Cirencester was surprised to see the Easter bunny was out. English culture appears to celebrate everything so early nowadays. 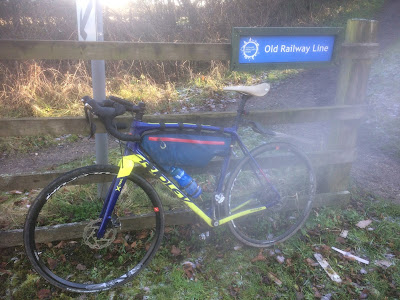 My adventure got real interesting once I had reached South Cerney. Cricklade (the next control) was 5 miles away and I had the choice of road or off-road. Cycling 'Eleven' my 'cross bike', fitted with 28mm tyres, the 'off-road' choice was a sure winner. The route followed an old railway line and beautiful bridges were past on route. Rewarded myself with a full English at Stacey's cafe. 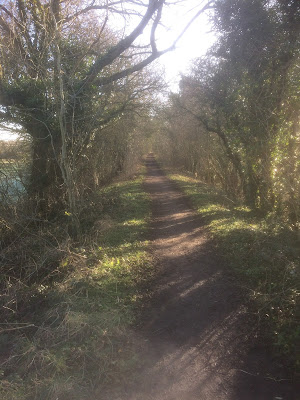 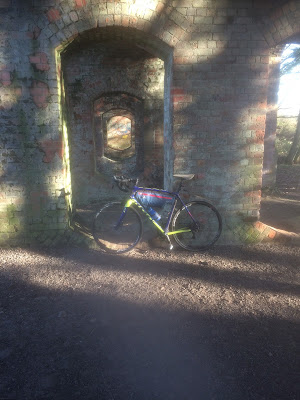 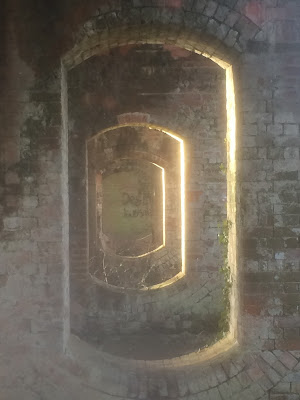 Leaving Cricklade, I found an awesome cycle track that avoided any main road menace to struggle through to get on my way towards Witney. The usual airfields were passed and big planes were being photographed by photographers no less. Once at Witney, I stopped at Greggs for some ginger bread man delights and cup of tea. My toes were still cold but slowly defrosting.
From Witney, I headed home (though home was still about 85k away). Beautiful quiet roads were cycled in the most part and it was lovely to be somewhere so traffic-free. After so many k's, I saw a sign for the Rollright Stones. A short off road section (major muddy wheels) took me to the Whispering Knights.


''By analogy with other such monuments, the Whispering Knights was probably one the earliest funerary monuments in Britain, perhaps built around 3,800 BC and the c.2m square chamber would have contained the disarticulated bones of several individuals. Early Neolithic, Beaker and early Bronze Age pottery found in the immediate vicinity suggests that the tomb was venerated over many centuries and a piece of human bone washed out from the chamber was radiocarbon dated to c.1700BC.
The monument got its name as part of the legend about the king and his army who were outwitted by a witch and turned to stone: because of the conspiratorial way in which the portal stones lean towards each other, the stones are said to be the treacherous knights conniving against the king, though others think they are praying. Intriguingly, although it looks as if the central slab of the portal should be supporting the pillars either side, they do not actually touch, probably because the limestone has been dissolved over the millennia. ''
Could not leave this site without a look at the stone circle itself. I thought it was the Rollright stone circle, which I guess it is. However, it's correct name is 'The King's Men Stone Circle'.

''This ceremonial stone circle was erected around 2,500BC.  At present there are seventy-odd stones of heavily weathered local oolitic limestone (see Geology) set in a rather irregular ring about 31m across.  They were poetically described by William Stukeley as being “corroded like worm eaten wood, by the harsh Jaws of Time”; they were said to make “a very noble, rustic, sight, and strike an odd terror upon the spectators, and admiration at the design of ‘em”.  More recently, Aubrey Burl called them “seventy-seven stones, stumps and lumps of leprous limestone”.
The number of stones has changed over the years. Legends refer to stones having been taken away (to make bridges and the like), and it is likely that this created most of the gaps now visible. The stones are famously uncountable, but originally may have numbered about 105 standing shoulder to shoulder.    At the time the Stones were first protected as an ancient monument (1883) the owner was reported to have “replaced all the fallen stones in their original foundation.”  In fact the restoration was far from exact: most of the stones that are known to have been standing in their present positions since the 17th century show that it was originally built as an accurate circle.'' 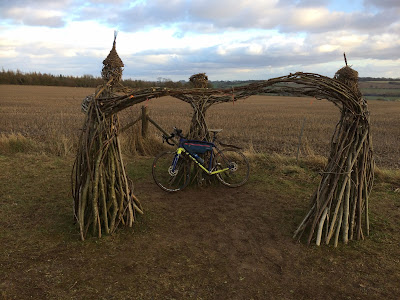 Some witches danced around Eleven, singing the 'dance of death'. I do hope she'll be ok... To be fair, Eleven proved to be a better ride today. I had swapped her saddle over and am now using a Brooks C17. I don't believe there is a perfect saddle, however, this saddle was way better than the previous and my bum was not sore at end of ride. I have not measured my sit bones but it appears wider saddles suit my bum better. I am not going to invest in a new saddle (skint) and will remain happy with my Brooks.

Seven long strides thou shalt take, says she
And if Long Compton thou canst see,
King of England thou shalt be! 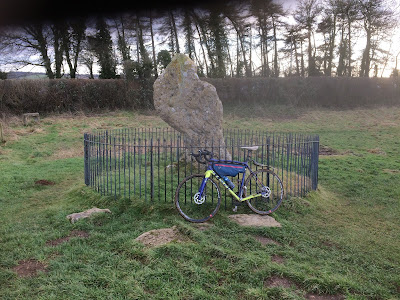 Paid a visit to the Kingstone before I set off (back on roads) once more. Interesting stuff. Rock on!


''This fine standing stone is located just off the crest of the low rise that supposedly prevented the King seeing Long Compton (see the article 'Folklore and Legends'). Immediately to the north-east there was an early Bronze Age round cairn 17m across with a central chamber (of which the capstone peeps through the grass) set exactly at the top of the ridge.  There was at least one other Bronze Age barrow nearby and excavations in the 1980s revealed human cremations marked by wooden posts and others inserted into the top of the cairn.  The King Stone is most likely to have been erected around 1500 BC as a permanent memorial to the burial ground rather than being an outlier to the much older Stone Circle.
The name ‘King Stone’ may have originated, like some other standing stones of the same name, from its use to mark an important meeting place associated with an extensive Saxon cemetery in the vicinity;  but if so, the name may only reflect the adoption of the pre-existing standing stone for that purpose rather than having been erected in the Saxon period, but that is not known for certain.''
The roads remained the lanesy type and continued to be mostly traffic free. On nearing Stratford, I cycled the 'Stratford Greenway' another stretch of off-road, completely traffic free. There's a lot to be said for 28mm tyres. 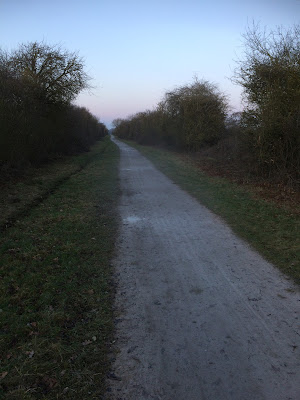 Once hitting Stratford (which avoided the main roads by following off-road sections and cycle track), I spent a further stretch cycling off-road and navigated along tow-path. This adventure had a bit of everything in and made an audax 'feel' very different.

Once off the tow-path, I headed for Great Alne. Great Alne was close to home and various options for home were available. I chose the shortest route and reached home about 12 hours later than when I had left earlier. A fantastic ride which I'm sure to cycle again.
at January 20, 2018