Hit the sales, on a cycle!

Wowser, a week into the new year already. How did this happen? How can it be?

Monday saw me complete my first run of the year. An 8k walk/run affair. Niggly knee to boot.

Tuesday saw me complete my first cycle (and commute) of the year. Thankfully, my knee didn't niggle whilst cycling but it felt painful a little once home. I hope this niggle disappears soon.

Woke early on Wednesday. Was woken up by Lunar who burst into my room exclaiming 'Dad, I need a poo'. Strange thing was, she had woken me whilst I was dreaming about unblocking a toilet. Strange indeed! Today was the first indoor spin of the year. My poor bike sounded a bit creaky. Maybe I should take it off the trainer and re-set it up? Ideally, I'd like a trashy bike to use specifically on the trainer rather than my lovely roubaix.

Thursday was another first. First day I cycled to the work this year wringing wet! Oh boy, it sure was a wet and windy day. My waterproofs clearly are not. Cycling home wasn't so bad but my clothes had not completely dried out from earlier.

Friday was a rest day. I had thought about riding into work but it was raining again and my shoe's still had not dried from the previous day. Was probably good to rest my legs before my planned 200k.

Saturday saw me complete my first audax of 2018, the 'January Sale'. Originally, I was going to cycle this with Ron and Jamie. Ron had a surprise birthday party to attend so bailed the night before. Poor Jamie came of his bike whilst he attempted to cycle across to me. The ice caused him to slip, bang his knee and mash up his bike.
Suffice to say, it was a cold and icy morning for the start of this January Sale. At the start, Mark Rigby (organiser) handed out the brevet cards, gave a little introduction talk and bid us farewell. Was nice to see Mark, he's a top bloke and this audax cost just £1 to enter - bonus.

It was dark from the off and many sections of ice were encountered. Hearsay suggested a few had fallen victim to the ice although I never saw a single fall. Each stage was about 50k in length. After the stretches of ice, things turned nice - I had reached Rowberry's cafe and was able to indulge in the usual staple diet of an audax cyclist! 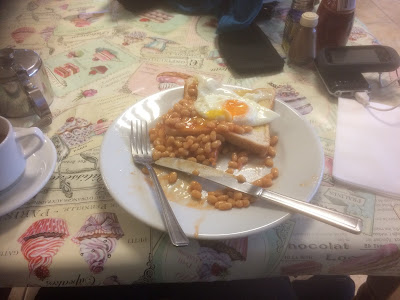 Next section took us to services on the M40. This part of the adventure was quite lose to home and we climbed over Cobley Hill and parts of Ron's TROAD route. I thought about Roger too as we cycled down Blind Lane and other areas we have covered. During this section and then throughout to the finish, I cycled alongside a chap called 'Paul'. Paul was an interesting chap who likes to spend time cycle touring and we shared many stories and such like. Nice dirty Burger king was devoured at services!
The whole route was relatively hilly and this next section was no exception. We had to navigate a 14% climb up Edge Hill (which originally looked like the route would skirt around it). Our destination was a cafe in Chipping Norton which we seemed to reach in good time, I remember last time I cycled this it was dark when I reached the cafe - this time it was daylight. (On reflection, last time I cycled this event we set out an hour later). Ate a tasty toastie at this control and dried my shoes and shirt out a little on the radiators. There was no heavy rain on route but a little drizzle (maybe even snow) on occasions.

Last stage was very undulating in nature, like a roller coaster. The views were quite spectacular and rolling hills and valleys could be seen. 'O LORD, our Lord, how excellent is thy name in all the earth!' The fastest descent was Soudley Hill (though I was getting it mixed up with Saintbury Hill in my head). How grateful was I for having disc brakes?! Eleven was bike of choice for this adventure. This final section finished with a nice roll into the arrivee! Woo Hoo job done. Brevet card validated by Mark Rigby and I was good to go (home). Informed Mark that this was the best audax I had done this year and felt it was a £1 well spent!

Woke up Sunday too a painful left leg (niggling) and a sore bum. I don't tend to recover too well nowadays. Thinking that perhaps I should swap saddles and maybe get a bike fit before TAW. Definitely need to continue training.