Ride a tyre down the River Euphrates

Monday: Wanted to run but just couldn't find the time. Have said it before but 'work really gets in the way of fun' at often times. Monday turned out to be a rest day.

Tuesday: Wow, what a day. Completed my first open water (OW) swim at Ragley Lake. Aside from the sea, I think this was my first ever OW swim. My sister Jane tells me I've swam in Arrow Vale Lake before but I don't think so (though do remember we capsized canoe's there). All being well, I will swim Arrow Valley lake during my planned 1/4 Isoman triathlon event. 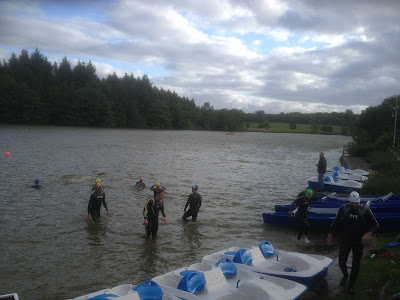 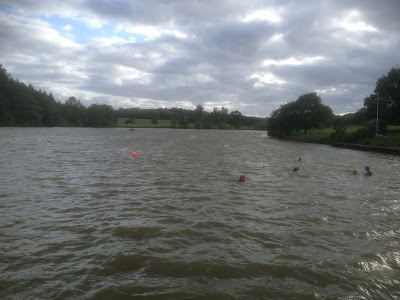 When I rocked up to the Lake I really wasn't sure what to expect or what to do. Luckily the chap parked next to me happened to be my new buddy 'John Legge' from triathlon club. John really looked after me and showed me what to do in terms of getting ready, registering and entering the lake. I got changed into my wetsuit next to my car (essentially copying John's routine). Once in the water, it was kinda hard to describe - I was neither hot nor cold though I suspected the water was cold. As I started to swim out, I was reluctant to put my face in the water but after about a minute was brave enough to do so. I expected my goggles would allow me to see clearly into the lake and spot fish and all sorts but they didn't. Looking through goggles was like looking through a jar of mustard. The swim around the lake (1st lap) seemed to take an age - it actually took me about 25 minutes to swim these 750 metres (my GPS watch reckoned I swam 1.1k but I am unsure of the conversion). Wow, I swam a lap of Ragley Lake! Back at the start John congratulated me and it was great to see Phil was there too (the chap who got me into this malarkey in the first place).
The water was considered choppy and it sure was windy outside. I nipped out of the lake to remove my wedding ring as I felt it was slipping off. I then returned to the lake and figured I'd swim a second lap. I was more confident on my 2nd lap but still slow. Some guy swam into me but all was okay. At times lake weed would brush against me which felt a little nasty and the lake stunk a bit pond like too. Was real pleased I managed to complete 2 laps. I was tempted to try a third lap but didn't want to push my luck - had already witnessed a boat going out and rescuing one swimmer. All in all, a great first experience and it felt nice to be inside my tri-suit (thanks SJ x), inside my wetsuit. Some folk asked 'how did it feel', well my experience was like riding a tyre down the River Euphrates! Only slight menace was some cramps in my calves and ankles during and after the swim. Some folk commented I got cramps because it was so cold, others said it was due to lack of salt (and suggested I take 'salt sticks' or something?!)

Wednesday: Ouch, woke up with sore calves. After swimming I had usually felt tight in my chest area, however, after my OW swim it was my calf muscles that felt tight. Kinda surprised because I thought I used this muscle group lots during my cycling activities. This new triathlon experience was really a learning exercise that was teaching me big time.
Achey calves didn't prevent me from going for a run. And what a run I ran! 10 big fat miles! The furthest I have ran for a long time (possibly years). It felt good to run, the weather was fine and I felt okay whilst running. Once I stopped running though, ouch, my calves really hurt and I was reduced to hobbling. 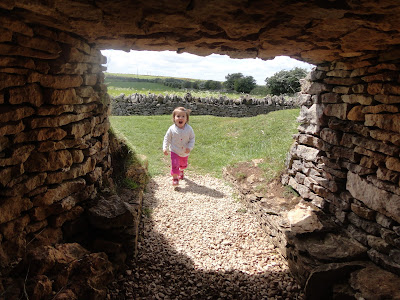 Achey calves didn't stop me going to Winchcombe with my family. We walked a big big hill in search of the Goblin caves (Belas Knap). Lunar located the 'tunnels' but the Goblins had long gone. 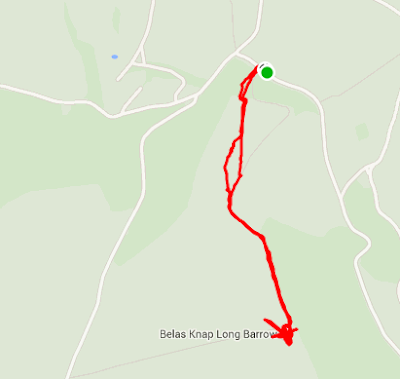 After my run and walk we went for a stroll around Bourton on the Water. Family day was so much fun. Oh, and we found the bog where the Goblins now reside! 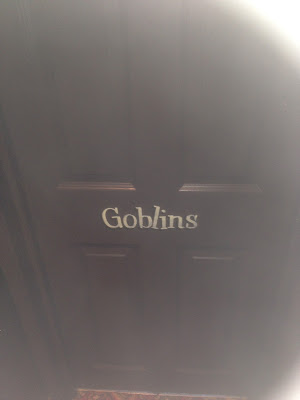 Saturday: Cycle commute. Pleased to have been back on the bike. Used my single-speed machine as it was the weekend and the roads were a wee bit quieter.

Sunday: What a great day this was! Started off by open swimming once more in Ragley Lake. Unlike last time, the water was calm and definitely warm. In fact, it was a beautiful day and the sun was shining bright. On Sundays, swimming is only allowed to the half-way point, so a lap would equate to 400m (as opposed to the 750m laps I swam on Tuesday). In all, I swam 5 laps = 1.25 miles! I was the 2nd person in the lake but there must have been about a further 200 that joined me a short while later. Just before I swam my first lap, I saw a fish jump out of the water which was nice. My first 3 laps went well and I suffered with no real cramp or tight muscles. When I looked up I saw Phil again from the tri-club. And then, I spotted John Mitchum and Phil B - how cool and unexpected that was! Drinking electrolyte juice before I started swimming helped delay cramp I'm sure but even so, I experienced cramps a little during my 4th and 5th laps. All in all, a great swim. Am sure I will be able to complete the necessary 1.75 miles during my pending 1/4 Isoman triathlon (just slowly that's all).

In the afternoon, I swam some more. Not in a lake but a swimming pool. This was the swimming session with my local tri-club. I swam lots of lengths (but no where near as many as the faster others in the club). My left arm felt a tad niggly but on I swam.
Finished the day and week by cycling a jolly with the tri-club. This was a 35k loop in beautiful sunshine (and the longer/faster option of 2 available routes). My cycling is definitely better than my swimming. Folk were marvelled at my rather funky SPD sandals (not worn with socks)!