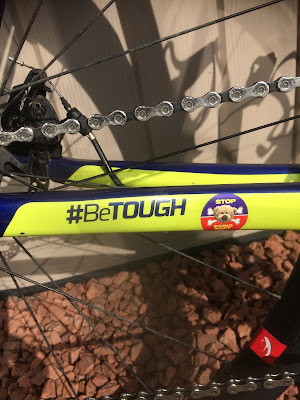 Horrors, my TAW experience is only like 2 months away! Notes to self - Be Tough; Stop Being Soft. Ha!

My training this week was relatively simple. It consisted of 3 to work and back cycle commutes and a Cotswold caper. Didn't cycle as long and far as I would have liked but 388k was relatively ok. (Hard juggling time off work to have fun).

My Cotswold Caper was basically a DIY Perm audax event that covered 231k in total. It started from my abode and headed via Stratford to the first control in Moreton in Marsh. The first leg was wet, muddy and generally miserable. Towpath was cycled and the tent that I have often seen on the Stratford towpath was still there - that went dweller has been camped out a long time! The Stratford Grenway was full of puddles and proved quite boring to be honest. Once back on the road, things improved a little. My disc rotors squealed for ages being full of mud and my chain creaked the whole distance until back home (oh for a little oil). Quick stop at control (super store) and cracked on. 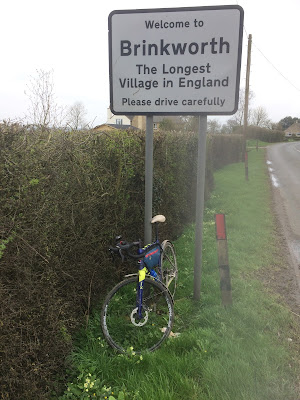 Brinkworth was the next control. This is the longest village in England. I stopped at a car workshop and picked up a business card as my POP.

Shortly after Brinkworth came Royal Wootton Bassett, the next control. This was a super short section. Less than 10k between the controls.

On the next leg, before I reached the Burford control, I was stopped by a random woman. She asked if my frame bag was 'Alpkit', which indeed it was. She then asked if I was an audax cyclist and it turned out she was too. We chatted for a short while during which time she told me she completed TAW last year. She didn't have a lot of positive things to say about it. In fact, she questioned why I was doing it and told me not too. She said the weather is rubbish, Ireland is very exposed, there are long gravel and bog sections, she went long periods feeling hungry and isolated. She asked if I planned to bivvy, replied 'yes' and she scorned 'don't do it', stating I would need places to dry my clothes. She also said Continental tyres were rubbish and would shred (have not long purchased same). Hmm. Then I remembered 'Be Tough. Don't Be Soft'. Hmm. She also said that the Cotswolds made a good training ground and that was just as well as I was training on this ride and cycling in the Cotswolds. In fact some of my route crossed paths with the Cotswold Corker - another cracking audax route. 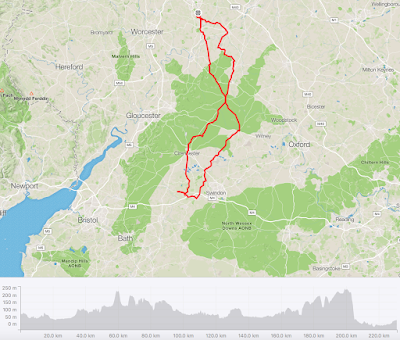 Was great reaching Burford. Had cycled through a lot of the Cotswolds and passed places that cycle adventures had taken me before. Now I was stopped near the pub where Lunar wee'd over the seats whilst on a weekend with the Mrs. Ha - cycle adventures are often filled with memories and knew memories are often created too.

Final stretch proved a little hilly. What comes up must come down and indeed, I was treated to some nice zoomy descent. My route actually finished with my regular commute back home. And so ended my training for the week.
at April 15, 2018