Last week was pretty awesome. It began with a Bank Holiday. Holiday time to spend running through the woods with my wife and kids. Aces! The week ended with a trip in Welsh Wales. 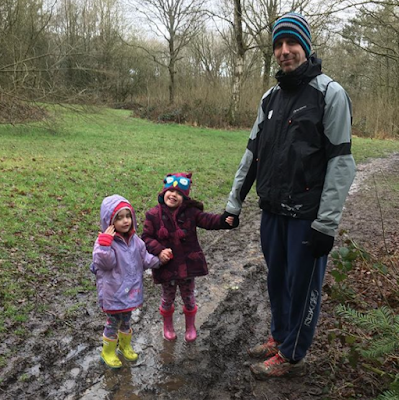 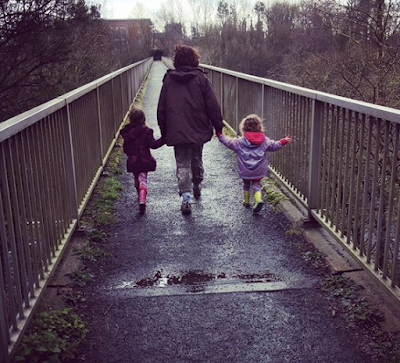 The training went rather well this week. Started the week with 2 runs and 2 cycle to work and back commutes. The real training event was kept for the weekend. 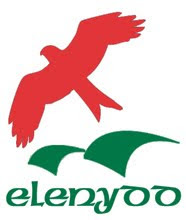 Yes indeed, Saturday saw Jamie and I complete a fantastic 307k audax event, namely 'Yr Elenydd'. This was the 32nd edition (year) of the AUK classic 'There (and back) again' from the Shire across 'blue remembered hills' to the wilder land of the Elenydd, the desolation of the Tregaron mountain road and the Ystwyth and Elan valleys.

My thoughts and memoirs from the Elenydd are recounted below:

Jamie and I drove to the start on Friday evening. We pitched our tents, readied our bikes and crashed out. I thought my disc brakes were rubbing to start with, however, it was a simple mudguard causing menace. I took my old 'festival tent' for fear of rain and mud. It was a nice thought that we had ready pitched tents for our return.
At something like 5 a.m. we woke up, got up, had breakfast. There were about 100 cyclists gathered in a village hall, fuelling up ready for the start. At 6 a.m. we were off, leaving Upton Magna for a 300k jolly. 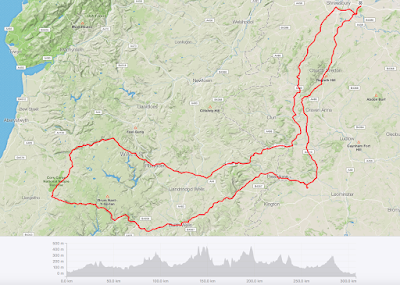 It was a hilly affair. Covered something like 4,500m of ascent. In audax language that's 4.5 AAA points. The total route was 307k. At some point we climbed the 'Devil's Staircase', a tough climb of 25%. Jamie asked if I knew I had a 'spare' gear - I had no idea. Was good for the old mentality knowing I had a lower gear that was redundant for this beast of a climb.
The weather was very wet mostly. Much rain. Flooded roads. Thankfully, no wind. We had periods of dryness but these were few and far between.


First control was Shobdon Airfield. We had cycled some 65k to get here and were dripping wet. Some poor guy here was suffering big time as he had grit in his eye. We found this and subsequent controls great for drying (well warming) our gear as well as fuelling up. We had the usual audax staple diet of a fry up.

The next control at Builth Wells hurt the eyes too, there was a big, big woman behind the counter! A back room had a roaring fire which was a nice touch (or was this the first control, I dunno). Is hard to recount an adventure with full accuracy when one is so drained, pooped and wrecked.
We saw lots and lots of Tregaron mountain toads. Most folk thought they were frogs. We knew better. The control at Tregaron proved to be a cosy stop. Good food. Another great place to help dry wet clothes.


A rather strange cyclist 'Lee Botwood' cycled alongside us at times and was over interested in road kill. We saw him pick up a hare and lick his lips. When he saw we were on to him he fringed poor hare away.
Rhayader was very picturesque. We had cycled 202k to get to this point. The bike shop that helped with repairs on the Bear Bones 200 was passed which made me think of our buddies Chris and Ron. Coming down a descent at 72.7kph was awesome (but I forgot to look out for the damns).

The route was truly awesome with some very spectacular views. We saw one couple cycling on a tandem, which made me think of my buddy Roger as he had cycled this on a tandem too. I struggle to imagine a tandem getting up the Devils Staircase. 2 folk were on trikes. Oh man, so many delights - including lots of flying kites (birds). Toll - you don't know what you missed mate.

Our last control was in a place called Little Brampton. It was dark by now but it was easy to feel the 2 big 'bumps' (ascents) we had to climb to reach there. After we had eaten at the control, we had just one further ascent to climb then weeee, a 20k descent finally led to the arrivee! Woo hoo - an event that was both started and completed at last!
at April 09, 2018