Last weekend saw me complete ‘A Rough Diamond’ 300k permanent event. I had ridden this event before, but as a calendar event and not a permanent. This time around, I cycled with my buddy Chris.

The event started at Tewkesbury, not far from the organisers (Mark Rigby) abode. It was the perfect day for cycling - warm, sunny and during the summer months. We hit the first control after cycling only 13k. This first control was Beckford Post Office – well it was according to the route sheet, the brevet card I had been issued with had a different control listed?! In fact the card and route-sheet didn’t exactly match. I decided to follow the route-sheet (in terms of controls). As for navigation, if truth be told – Chris and I both had differing GPX files and we would follow parts of each.

We left Beckford and passed through Pershore, Wadborough and then Worcester. We neither followed GPX or route-sheet through Worcester, instead relied on my local knowledge. This resulted in us missing out a portion of cycle lane that goes over ‘that bridge that SJ and I used to run across when SJ was training for her marathon’ but led us though a sprinkling fountain which was pretty and different. From Worcester we cycled along some beautiful roads, as the photo below illustrates. 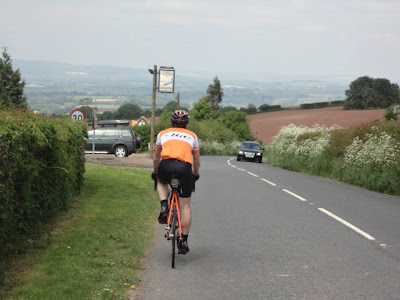 Chris was wearing his awesome new ‘Bic’ jersey that a good friend had gotten him for his birthday. Spoilt I reckon! We passed through Martley and stopped at Burford Garden Centre just outside Tenbury Wells for control purposes. 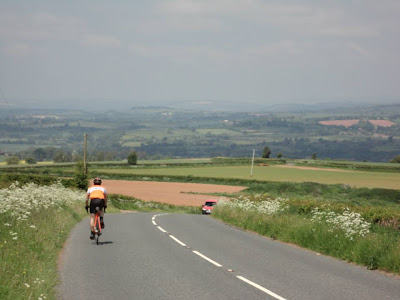 We had both stopped at this control before. As nice as it is, it was pricey. Luckily, I had taken precautions and we ate some lovely sandwiches which I had prepared earlier. We washed these sandwiches down with a lovely cup of tea. 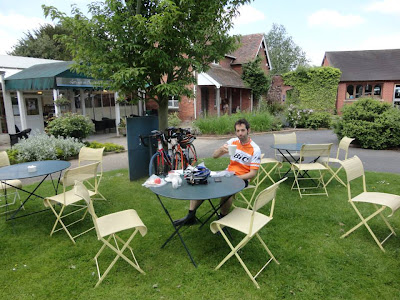 We left Burford and headed for Wales! Again lovely roads were cycled and the weather was just great. The greatest part of this section (in my opinion) was when we passed through Hay. First off, we just had to stop at the ‘Magic Faraway Tree’ which was a Great Oak dating as far back as the Doomsday Book (have blogged about this before). We stepped inside the tree for the obligatory psychedelic experience. 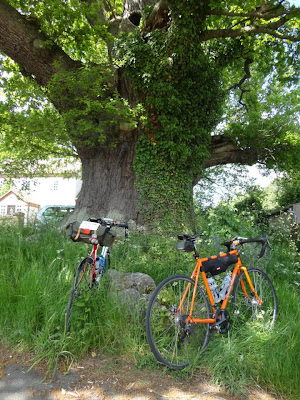 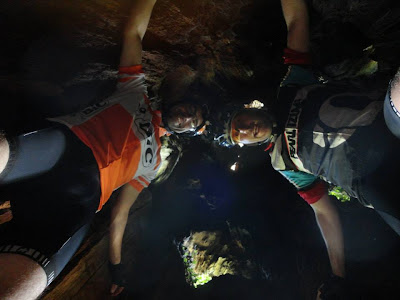 A little  further ahead we passed over the Hay TrOLL bridge. Both trolls were out and drinking wine too. Chris paid the TrOLL fee (20p) and we were allowed passage across said bridge. We saw Graham (the male troll) about a year ago and spoke about the magic tree and were quite mythed that he still hadn’t visited the Magic Faraway Tree despite it being only 4k or so away. Trolls eh?!

We left the trolls behind and continued on our adventure. We were heading south with troll rock in our mouth. When we finally reached the White Hart Control in Talybont-on-Usk we were about half-way. 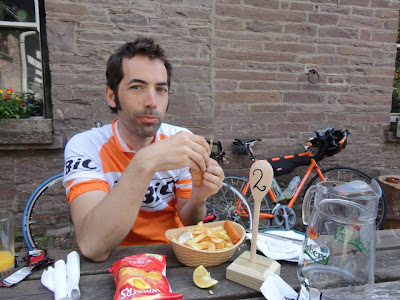 We had a nice food stop here where we consumed crisps, fish fingers and chips. Our food came with a baguette but for some reason mine was served with only half a bread. I enquired where the ‘other half’ was and was given the ‘missing half’ along with the chef’s apologies. Bizarre. At this stop we met another cyclist who was doing a different 300k (calendar) event.

The stage from Talybont-on-Usk to Slimbridge was long – about 100k! We decided to break this distance up and stop just after we crossed the Old Severn Bridge. I loved the bridge and often feel a sense of ‘overwhelm’ every time I cross it. Wow, such a feat of engineering! 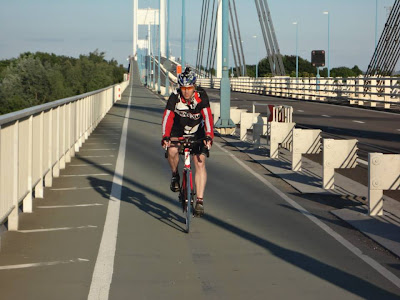 Amazingly, Chris suggested we stop at Burger King. So, stop at Burger King we did! Not sure what had happened to Chris on this adventure – not only did he suggest junk food, he ate loads! Chris also did not suffer any ‘lulls’ and felt he had fire in his legs after cycling 300k – his furthest distance to date.  What a weird and wonderful adventure we were cycling.

From our Burger King stop we continued on and passed through some strange named places including Hill and Ham. It was getting a little cooler now, though still warm and the daylight lasted much into the night. It was, however, dark by the time we reached the Slimbridge control.

Slimbridge was just a short stop where we ate crisps and chocolate. Chris spotted another bizarre thing. This ‘thing’ was a motorbike hearse. Weird or what?! 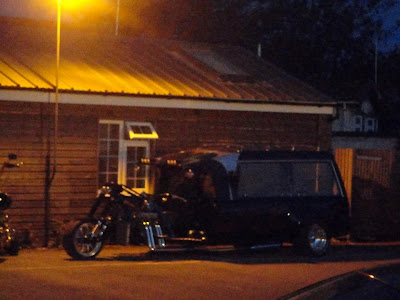 As soon as we left Slimbridge we were cycling along a towpath in the dark. This was ‘interesting’ to say the least. We had a few different sections along towpath but thankfully after so long the towpath was concrete and led into docks. I didn’t spot Gloucester HMP marked on the route sheet but we found the cathedral and passed through the arch. Next weird sight was a couple of young drunkards crashed out on the flower beds of a particular roundabout. After a bit of faffing we hit the A38 that took us all the way back to the arrivee in Tewkesbury. Woo hoo – job done. Only it wasn’t! My Garmin was reading 299k, so I headed to a ATM machine just to make sure I really did cycle 300k!