This week saw me complete the 'Lechlade-on-Thames 200k' permanent audax for the second time. I rode much of this route during my 'Black Cat Lunar Lark Cycle' too. This ride was different on many counts though.

The biggest difference with this ride was the fact that the organiser (Steve Gloster) 'allowed' me to start and finish in Studley. This made it easier for me, as I didn't have to drive or cycle far out to a start point and using these additional start/finish controls only added a few k's. I picked up the 'proper' route at about the 15k mark in Sambourne. Navigating to the first control was easy - I was using Jamie M's GPX files from when he cycled this route. Cheers Jamie! In fact, I was loaded with a GPX file, an up-dated route sheet and my local knowledge. On the whole I followed Jamie's route but chose to ride different roads here and there. My completed route is presented below: 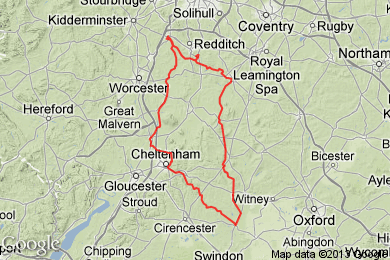 Jamie's route took me to the first control by a slightly different means. At this control I stocked up on peanut M&M's and carried swiftly on. On my previous attempt I found it difficult to locate the cycle path leading to the Greenway, it appeared Jamie did too! However, thanks to Jamie I did find the correct path and rode Stratford Greenway for the first time. 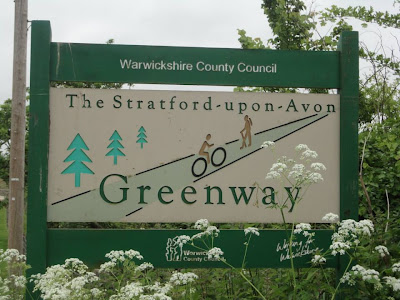 The Greenway was a long stretch of track that cut through the countryside and avoided any motorised traffic. It was pretty and reminded me of Chester Greenway which I had recently cycled. This was obviously an old railway line - some rail carriages were being used and conveted into a cafe and a bike hire shop. 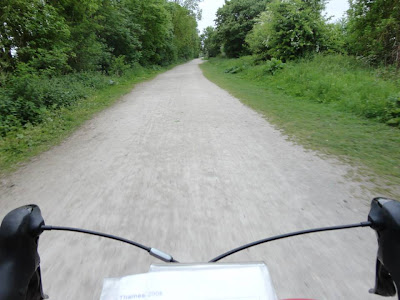 The downside of the Greenway was the fact that it was slow. The surface was gravelly and dusty (not smooth tarmac like in Chester) and many a time I had to dismount my bike to get through a kissing gate. Last time I cycled the event, I cycled roads through Stratford Town Centre and then straight to Chipping Campden. I think the road way probably wins, as the roads are not too busy, are smooth, roll fast and making reaching Chopping Campden a zoomier more pleasant experience. I was pleased I had cycled the Greenway at last and would probably find it suited fatter tyres like on my mountain bike. Once leaving the greenway, the Chipping Campden control soon came. 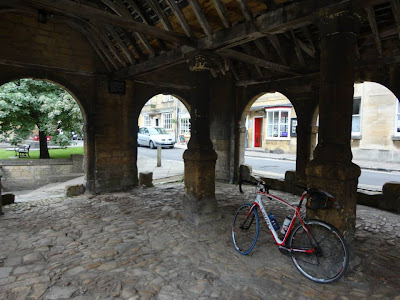 Chipping Campden was such a pretty place as the photo above demonstrates. I ate my breakfast here (rather than spending monies on an expensive breakfast at Bantams Tea Rooms). I think I ate a chocolate breakfast...

This was a lovely day to cycle. Near perfect summer weather and no bugs! Nice roads took me through some stunning scenery to my lunch stop control - Lechlade. I stopped on a local park bench and ate a lunch I had prepared earlier at home (chicken sandwiches) plus a recently purchased banana for POP purposes. 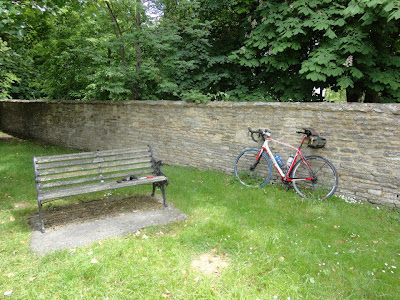 Lechlade to Tewkesbury - the next control, was such a lengthy section. Pleased I had eaten well. Again the roads pass through some truly amazing places. Bibury was one such place and I had to stop just to take a photo. 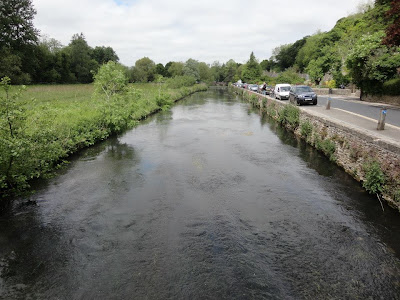 The control in Tewkesbury was a Shell Petrol Station. It felt like deja vu here, as I was served by the same attendant as last time and they asked me the same questions too. I purchased a bottle of water, had a drink and made haste.

Next stop was Bromsgrove. Cycling this section made it feel like an audax I had not ridden before because I cycled the correct route! Oh the wonders of GPX! The control was the same - Bromsgrove's Asda.

The last section was only about 15k. A nice lanesy route back to Studley that incorporated a part of the 'TROAD' route. A bit of a push to Astwood Bank and then a zoomy descent back into the village. I stopped at the Jubilee pub for my final POP! Woo hoo job done!