Wow, Jamie McLeod and myself completed the TransAtlantic Way (TAW) cycle race on 18th June 2018 in 11 days, 10 hours and 44 mins. This was a superb adventure and the first for the 'Adventure Squad'. Below is a summary of collected thoughts, photo's, facts,  and memories in an attempt to capture our adventure and share our experience. Due to there being so much content, each day will be posted as a separate blog entry. Oh, and the reason we were cycling this adventure was simple - we wanted to celebrate Jamie's 50th birthday and, well, no one else would cycle it with me. 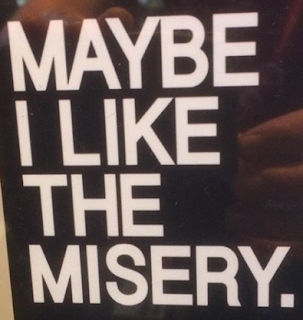 The adventure really began as soon as I had left my abode in the village and collected Jamie from his domicile in Town. We both hugged and kissed our family members goodbye prior to setting off an a 3-4 hour drive to Holyhead Ferry. As is our custom, we stopped for a Maccy D's on route.

Expensive this adventure of ours, maybe too expensive for a pauper like me. As soon as we got to the ferry point we had to pay a whopping £90 for parking expenses. Before we got on the ferry we were stung again and had to shell out another £40 to transport our bikes on said vessel (£10 each, each way). Not sure what this 'bike money' was for as there was no where suitable or decent bike storage or security provided on the ferry. We were joined by a few other crazy folk who had also entered the race. Once on the ferry, we slept.
About 3-4 hours later we had arrived on Irish soil, disembarked the ferry and cycled 1/2 mile to Trinity College. Here we met a whole number of bike packers and had a big fry up together and participated in some general cycle fraternising. This was a weird day really as we largely just wanted to start the race and sleep a while beforehand if we could. The race did not start until the following day and we couldn't just crash out as our shared room was not ready. Our room must have been cleaned over and over again because each time we asked if it was ready (and we asked on a few occasions) we were told 'it's being cleaned, come back at 2'. Hmmm, what to do? We figured we'd take our bikes to the storage area at the college where a miserable woman stated it would cost 6 euro's to leave our bikes un-attended against a wall in this open area because 'that's how it is here'. Hmm. We decided I would look after bikes and Jamie would visit the 'Book of Kell's' (which is an illuminated manuscript Gospel book in Latin, containing the four Gospels of the New Testament together with various prefatory texts and tables) exhibition at the college. When Jamie returned, I was asleep on the grass.
On wakening, we found a suitable place to store our bikes - in a TAW van. We then went deeper into Dublin and Jamie tasted an Irish Guinness and me an Irish Whiskey. The weather was perfect, very hot and sunny and we hoped our adventure would continue in this vain. A superb fish and chips (with rock salt) dinner followed our drinks and we were starting to buzz with the pre-race excitement.
Late afternoon and our room was finally ready. We faffed a little ensuring our bikes were set up ready for race day. My harness was causing issues but it was soon sorted. I had picked up a mascot in town too, 'Travelling Ted', an Irish bear who would accompany Jamie and I on our travels. He had pride of place on my front mud-guard.
Our spot trackers were collected too (which enabled friends and family to watch our dots on a dot tracker system throughout the race). The race briefing was attended and few rules were discussed. Essentially we were told that this was a self-supported and managed race. If short cuts were taken then there would be time limits imposed. Generally, have a good time was the flavour of the talk. Around this time we were also given race memento's - a TAW 2018 t-shirt, some bum butter, a cereal bar and a Epidura cap.

In the late evening we went and ate some super nice noodles and rice. Returned to our rooms relatively early. After popping my pain killers and some valium, lights were out at 8:15 p.m. When we awoke it was race day!

Before our race began, we had another super big breakfast, just like the previous day only more of it. We then had to cycle to the start, a short distance away. Once at the start we had to wait for our wave to be waved off. Jamie and I were in the last wave because we were a pair (of idiots) and had to sit a whole hour before we could depart.
Moments before Jamie and I were waved off we were interviewed by the race guys, however, we cannot find the video that was posted. We essentially wished each other well, shook hands and were buzzing that we were about to start an epic adventure in glorious sunshine. My dynamo light was causing me a little grief as it just wouldn't work (and did not work throughout whole adventure) - am hoping the cable is the only real issue. Prior to the off, we had our brevet cards signed by Adrian (the event organiser) too. Adrian signed 2 cards for me, I was using this day 1 as my RRtY audax for June.
How awesome it felt to finally start. Our plan for today was to simply cycle to Londonderry. We hoped we would reach the first checkpoint (peace bridge) and get our brevet cards signed and sleep at a hostel that was pre-booked. Simples.
The start was almost perfect. Hot weather and a very welcome tail wind. Despite the gradient being gently up-hill it felt as though we were descending. Our first stop was at Navan, the 50k mark, where we had a Maccy D's and felt like audax cyclists.
Our next stop was at Monaghan where we had covered 120k by this point. The weather was so hot that tarmac was melting in numerous places on the road. How cool was that?! This was a nice stop, especially for Jamie as he was given free chips by a fellow TAW cyclist. I purchased rice pudding (plus chicken sandwich) and was pleased (once again) that I had packed a spork. At often times (though not always) I would scribble down notes about our adventure and charge garmin at our feed stops.
Was very strange cycling into Northern Ireland. Just like 'that', the road signs changed (and distances were in miles and not km's), the car no. plates changed and currency was now sterling again.  I had created the route to Londonderry (as the compulsory TAW route did not start until we reached the Wild Atlantic Way), however, we stumbled upon a closed road. Some random road worker informed us the road was closed (we had seen sign after sign stating same) but eventually said 'hmm, you'll get through'. Get through we did, though this was a close call and we had to climb high banks and embark on some off-road action. What an adventure we were having already! 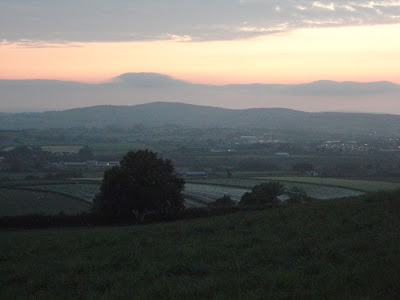 Our next stop was at the 175k mark in Omagh. I purchased some pastries here and (unknown at the time) was given change in sterling (Irish sterling looks different to English sterling). I also posted off my audax brevet card here too. Had to take a picture of the clouds covering the hills as they almost looked like a shadow. My dynamo was still not working, but no major menace, I had my friend with me who came prepared with back up lights. A nice Hope light shone the way to the control point. 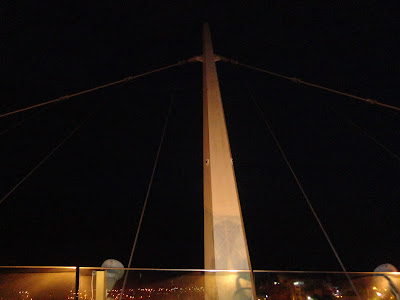 It felt wonderful to reach checkpoint 1, Peace Bridge, in Derry. We were congratulated and had our brevet cards stamped. Next plan was to locate our hostel.

After a bit of mis-navigation, we found 51 Strand Street, our hostel for the night. I rang the bell and a very fat man answered the door and did not present as impressed one bit. He complained we were late and ordered us up the stairs to park our bikes in an outside room. This room was not a room at all, though we did not know this until the following day when we retrieved our bikes. This 'room' was an outside space on a roof or something. Mr Fat Man then showed us our room, a big room with a triple bunk and a double bed. I think he said it was too late for us to shower and was keen for us to go to bed. He was not pleased we wanted to sleep in separate beds and grudgingly went and got clean sheets for Jamie's bunk. 'So, you two don't want to sleep together no. Hmm. I'll have to get extra sheets' he said, in his saddened, 'you have really put me out' tone. His last remark was, 'the breakfast here is very good. We have eggs'. Looking at the size of him, we could not wait until breakfast and slept well with dreams of bacon, sausage and of course eggs!