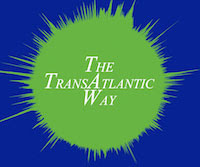 How nice to awake and find out my mattress hadn't de-flated. We were of course at checkpoint 2 which meant we had a 'free' hostel stay. Had washed my shorts the night before but sadly they hadn't dried, they were wringing wet. Thankfully Ireland was hot (it's hottest summer since 1995) and was able to dry my shorts by placing them on my handlebar harness as I cycled along.

Was kinda strange being at this checkpoint as we saw a lot of TAW cyclists. Some were already sleeping in the dorm when we arrived, others were eating and now folk were just arriving as we settled down to breakfast (cereals and toast). Folk were still arriving as we departed. 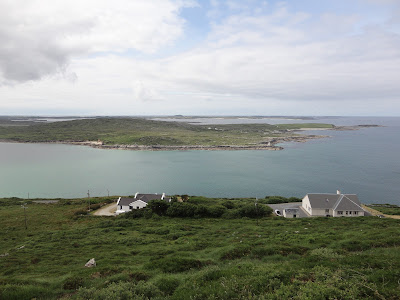 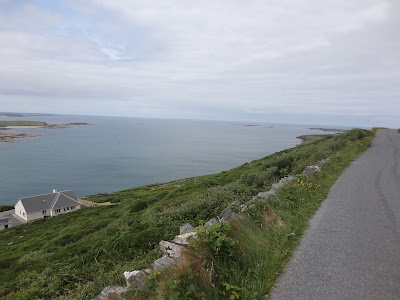 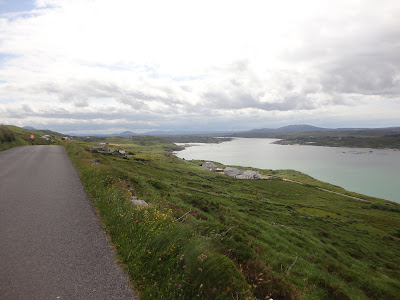 Much like other days, the fantastic weather was on our side. We were continually spoilt with stunning coastal and mountain views. The roads were great too and not littered with menace pot holes. My word, even the motorists (few and far between) were friendly also.
At often times we would see peat cut out in little bricks and stacked in a pyramid shape to presumably dry out. After witnessing this sort of sight a thousand times or more, figured a picture was warranted. This might explain why there was so much land space and so few animals grazing. 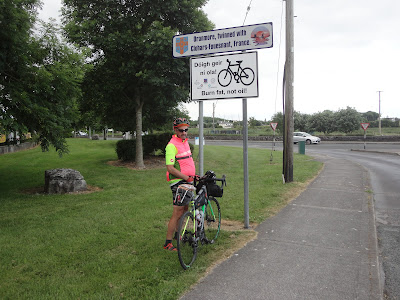 'Burn fat, not oil'! Have no idea what we were both burning. We ate like kings and am sure we returned home weighing a good few pounds more! We liked the principle. Oh, and talking about food, we had the most amazing panini and nacho's at around the 100k mark. Delicious. I even instructed the 'cafe boy' to scrub my water bottle clean and he obliged. Ha! Living the dream. 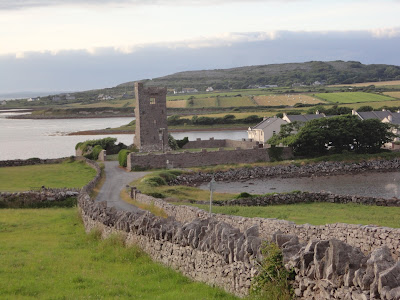 Sights are a wonderful thing and we saw lots of them. So many castles, ruins, standing stones, follies etc were passed and spotted that it was impossible to stop and inspect them all. Am surprised the Irish haven't monopolised on this (the English and Scottish certainly seem to do) and made these sites of historic interest or whatever.
Some places just had to be stopped at though. One such place was this 'drinking water stop' which had instructions to 'please keep clean'. I think folk mis-read 'keep clean' for 'latrine'. Maybe it was the smell of this place that caused Jamie to fall from his bike and mash up his rear mech a little?!

Adventures such as this are a test. A test of character, ability and mental state. One has to battle with highs and lows and even demons perhaps. Jamie and I both had ups and downs and they would occur at different times for each of us. In a way, it was a splendid idea that we were riding as a pair because we could both help one another with the changes in our perceptions and mood as we went along. At my most emotional, I found (thankfully) that I was not low in mood or depressed but rather found everything incredibly funny and would laugh spontaneously at nothing in particular and in a rather un-controllable manner. This was kinda fine but every now and then I thought I was going (or had gone) mad and this made my thinking of a paranoid nature.
We met a whole host of 'weird and wonderful' folk on our adventure. Each and every cyclist had a story of their own. One guy was participating in this event on a Bromptom (fold up bike) - big respect to him. Some folk were cycling donated bikes courtesy of sponsors. It didn't seem fair that I had to shell out big bucks to pay for this ride plus my gear when others were 'given' steeds and stuff for free. (Don't shoot me, I know 'life isn't fair'). Most nights I paid zero euro's to rough it, whilst some sponsored folk had a nice hotel, breakfast and spa to look forward to. One guy commented he had to pay 105 euro's for his room, I wish I had 105 euro's to part with!

A chat with some of the sponsored was interesting. One stated they were sponsored not because they were a particularly good athlete but because they could tell a good story. Surely the story of a guy roughing it on a second hand or cheap bike beats the story of a person cycling a top end bike with hotel stops each night? Another's popularity appeared to help with sponsors and those that were 'plat based' or 'vegan' athletes appeared to have a cult following. Jamie and I tried to be vegan and plant based for an hour at a time. Fair play to those that are - it's real hard work!

The strangest of folk appeared in Galway however. These folks were among the regular mix of folk. Up until now, Ireland appeared to be a very rural quiet place. Galway was the opposite, it appeared that everyone lived here. It was noisy, dirty and chaotic. The most noisy, dirty and chaotic character in the whole of Galway approached me and spoke to me directly face to face with maybe just a whisker between us. He was largely unintelligible and asked numerous questions one after the other. He would ask questions, often repeating earlier questions asked, before answers were given. Amongst the questions that I could make sense of were 'Where you from, where's your tent, where are you gonna sleep (spit), where's your tent'. Thankfully his final question was aimed at some guy coming out of a shop with cans of alcohol 'where's my change' and he disappeared from sight, just like that. I doubt he'll recall any of our interaction, however, Jamie and I will remember this fella for a while to come.

We were pleased to leave Galway and cycled until it was dark. We passed another cyclist who was looking for somewhere to stay despite carrying a light-weight tent with him. Why not camp?! 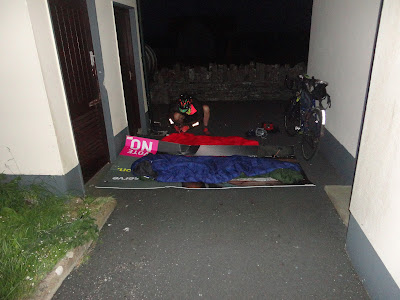 Tonight's sleep stop for us was another wild camp. We camped out under the stars in a church yard. This church, like virtually all others, was locked up at night. This was a cold and windy night and as per usual my air mattress kept de-flating. The anti-abortion poster made a good alternative mat for my sleeping bag though.
at June 23, 2018