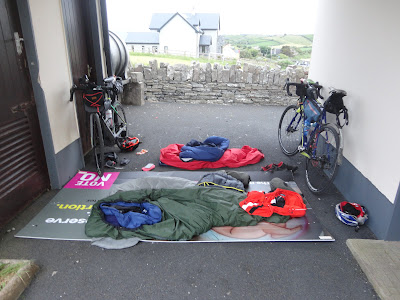 Ooh, last night had been a cold and windy one. I had awoke to a de-flated mattress. Jamie had woken to slug trails over his gear. The morning looked more promising. 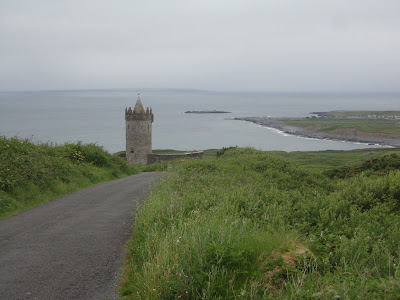 The day turned out just wonderful. Our adventure was just what one could have wanted. A tale of warriors, castles, sun, sea and sand and...
... dogs! Today we found out that I possessed the skills of a dog whisperer. After dog chases just the previous day, it came as no real surprise that another dog would chase. This dog, however, was different. He was not chasing so much, but running alongside me and ran and ran for k after k. This dog, dubbed 'Timmy Junior' by Jamie appeared to be fascinated by me and it was as though he believed I was his owner. He would completely disregard Jamie but run as I cycled and stop when I stopped. He would not go back and enjoyed any attention I gave him. We presumed he'd soon get fed up and return home but he didn't. After several k and several minutes I was starting to worry. Timmy would not stop running with us and I had to slow down each time a car passed to prevent him getting squished. My brakes were applied a few times as he ran in front of my front wheel too. What to do? Well, after about 3k we encountered a steep descent and figured we'd lose him here. I flew down the hill, looked behind and could not see Jamie or Timmy for a few moments. Jamie was coming down the hill at about 35 kph when Timmy ran straight past him (topping out at about 40kph) and caught me up. Oh no! We stopped at bottom of hill and Timmy would sit at my command, enjoy a stroke but was prepared to run further as we cycled. Poor thing appeared exhausted but there was no stopping him. Suggested Jamie give him some cake but cake was too precious a commodity that Jamie would not part with same. My final solution was to lead Timmy into a false sense of trust. I escorted him across the road to a nearby pub and tied him to a stake using rope that had cordoned off a parking area. Poor Timmy, we did hope he'd be found soon. He whimpered as we cycled away but at least he wasn't going to get squished by a motor car or be ran over by us guys. What an adventure for us all.
As we continued our cycle, I thought about another 'Timmy', back at home. Indeed, Timmy the tortoise was used over here to promote Guinness. I still had not, as yet, tried a Guinness but sure was a tad tired. I sure hoped (and trusted) my tortoise was being well looked after by my dear wife. 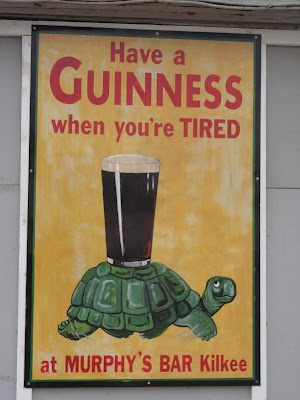 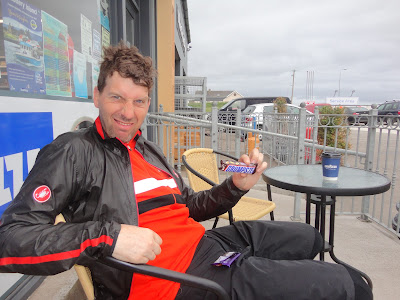 At one of our tea/coffee stops at a local garage forecourt, I was lucky and they were not. I had their last cup of tea. They had a flood of boiling hot water. So much menace throughout this adventure!
Today was very wet and windy with winds of 50mph plus. Thankfully, my 'lobster' jacket kept me perfectly dry. No extreme of weather appeared to affect my tracker. 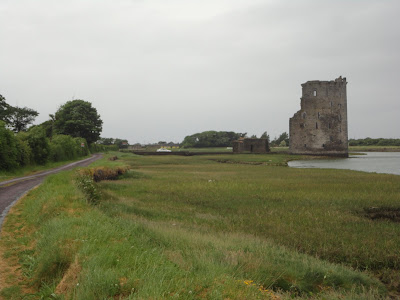 The rain and wind didn't last for ever and we had brighter spells throughout the day. This was as bad as the weather got. Sights and views remained as wonderful as ever and our senses of sight, smell, sound were continually buzzing. I love an old ruin. 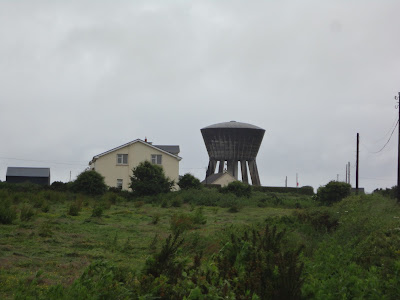 The water towers in Ireland were ace. We had seen one that looked like an AT-AT from Star Wars and now we were viewing one that looked like a tripod from War of the Worlds. Far out!
At some juncture we had a short ferry crossing. This was cool and broke up our day a little. We were able to have a quick chat with some other TAW cyclists prior to and on the crossing as we crossed. Aces! 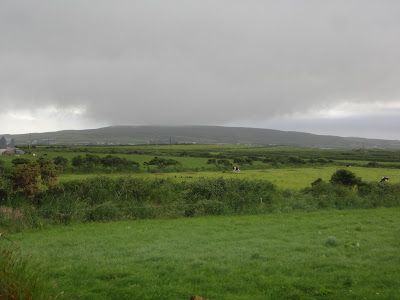 Once off the ferry we cycled on and on, as was our plan. As well as cycle lots, we would chat nonsense lots too and often break into song. Constantly our views would change and strangely it was just great viewing black angry clouds. 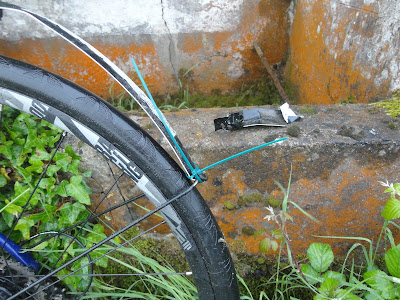 It wasn't only the clouds that were black and angry. Jamie's chain would slip from time to time and worse yet, he punctured. This was the only puncture during the entirety of our adventure. Parts of my rear mudguard had gone AWOL by now too. I remain kinda pleased with my road-side repair of said mud-guard. As Jamie and I were fixing, a kind woman pulled up in her car and made several offers for us to put our bikes in her car and said she would drive us to wherever. We declined, of course, but again the kindness of strangers is just amazing.
Once fixed we cycled on and on which was nice. We continued to chat nonsense at regular times and when we didn't chat nonsense my head was filled with so many wonderful thoughts and thinky things. I would often think about my wife and kids (and tortoise) and to be fair, must have thought about every family member that I have. I saw some random pottery/art work at one time that really made me think of my kids. I saw a moon and stars (which made me think of Lunar) and a little flower (that made me think of Melody). Such a strong thought was this that I even drew a picture of that I saw in my race notes. How cool was that?! Today was also special because I had spoken to SJ, Lunar, Melody and my parents on the phone too.
Our stop this night was a hostel in Tralee. Jamie managed to secure a room just for the two of us which was great. How nice it was to shower after so many days on the road. We ventured out to a nearby pub and Jamie completed his set mission whilst I had a 'green eggs and ham moment'. Yup indeed, I had a pint of Guinness and I enjoyed it so. When in Rome and all that, ha! This adventure saw me broaden my horizons and eat/drink what I would normally consider filth. As well as drinking Guinness, I ate black and white pudding, mushrooms, ham, ginger and fruit cake. Is amazing what the body can tolerate when stressed. That's my excuse anyway!
at June 23, 2018