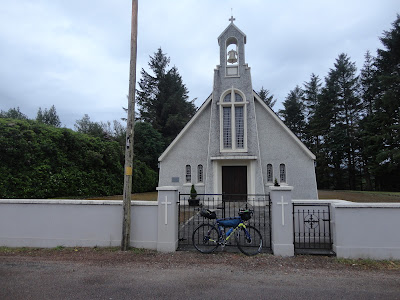 We slept well in the church. A good rest. The sanctuary that we needed. Our wild camp spots were getting better and better. 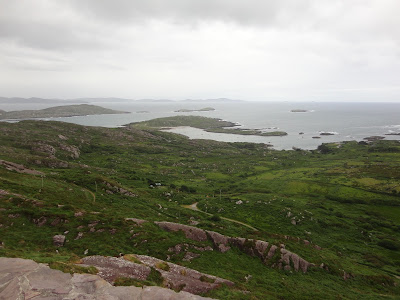 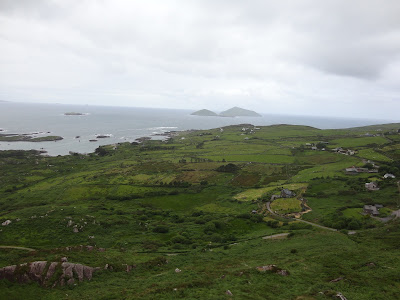 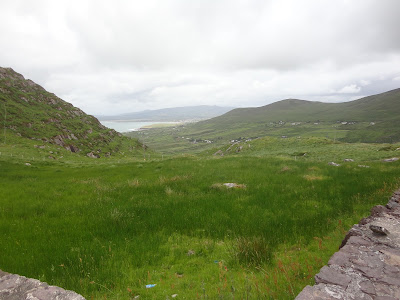 Our plan for today (like so many others) was to cycle and stop at a bike shop in the hope my wheel could be fixed. I was also hoping that no further spokes would pop whilst cycling. The awesome views helped distract my mind from the issues that we faced. 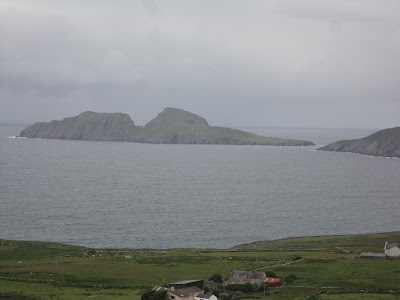 Ireland had so many islands of it's own. I often wished that one belonged to me and I would fantasise about owning it and pitching a tent or making a dwelling there. The amount of times I wished I had a little boat to sail to each island was untrue. My buddy Gary Levy informed me that his wife 'Emer' came from one of these little islands (think I've got that right). 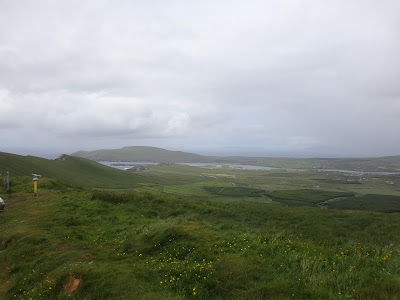 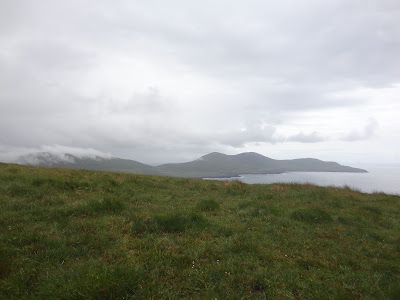 The clouds often looked angry despite the day actually being brilliantly warm and dry. Kinda funny but I actually liked the look of the angry clouds. I was hoping that perhaps we would hear loud bangs of thunder but we never did. 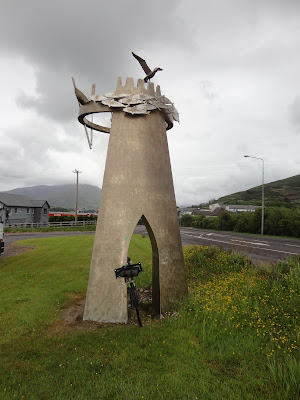 At about the 100k mark we found the bike shop we were looking for. As per usual, Kay provided the intelligence required. This bike shop was Casey Cycles.
The chaps inside were friendly enough and were able to replace my bust spoke with no real problem. Was kinda funny how many times they pumped and deflated my tyre though. After spoke fix, they heard a rattling sound and figured it was a nipple under the rim tape (correct). Then they spotted a tear in my tyre and deflated it to fit a tyre boot. Some raved about the tyres both Jamie and I were using (Continental GPS 4000's), however, this bike shop expressed how naff they were. Jamie had punctured and mine were torn. Perhaps Gatorskins would have been a better choice?!
Following wheel fix, we fixed ourselves a meal. A lovely cafe served us up some duck (or 'quack quack' as they called it) on panini. Delicious. 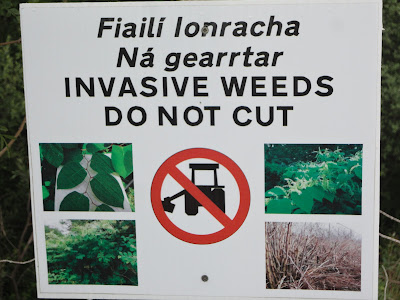 When we got back on our bikes and started cycling all was good again. I made a mental note of all the things that were commonplace in Ireland and set myself a task of taking pictures of these common things. One such thing was the 'invasive weeds (or Japanese knotweed) - do not cut' signs. We figured Jamie could blow this pic up once home and put it on his garden to prevent the neighbours complaining about his uncut grass. Ha! 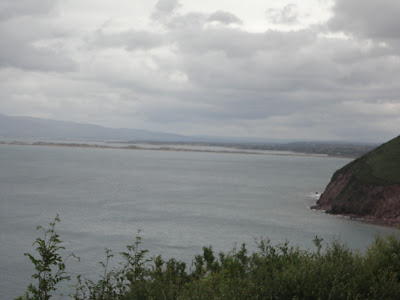 Had taken plenty of pictures of the coast already. And the mountains. And the sea. And of pretty much everything that was lovely to the eye. 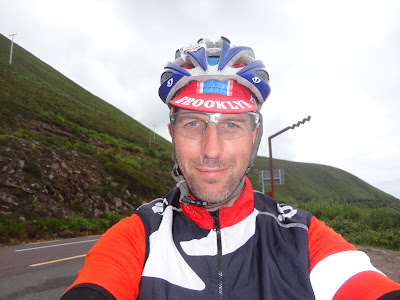 Not sure if that included me. Think I had only taken 1 selfie to date, so another wouldn't hurt, right? I really was in this wonderful place called Ireland and here's some proof. 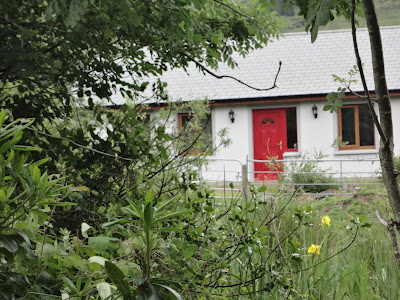 Most doors in Ireland were red. Not sure why, but it was definitely so. So, here is one of the many red doors located in Ireland. Picture taken in stealth mode. 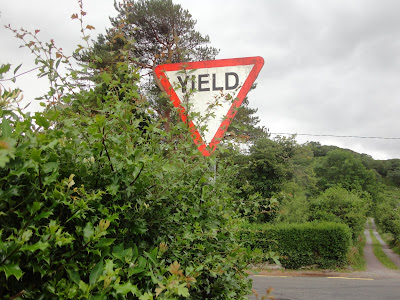 Yield signs were common. Give way signs were not. I have yielded a picture of an Irish sign for all to see. 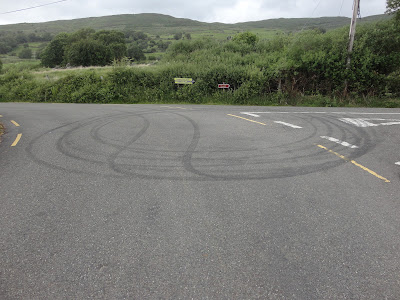 Ah, and doughnuts were to be seen every single day. Doughnut Dan we spoke about on day 2 appeared to have burnt rubber on the whole Wild Atlantic Way. Sadly we heard a news report about a 14 year old joy rider who had stolen a car and killed himself. 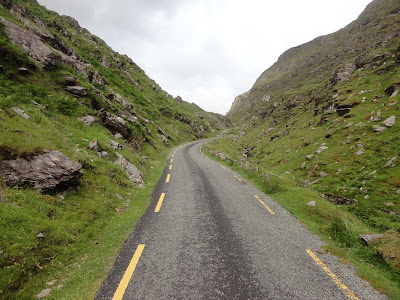 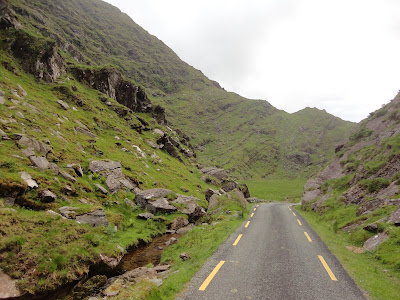 This was a relatively hilly day. I quite liked the hills and I liked them even more with a fully spoked wheel. The roads tended to be ultra quiet and the views amongst the best in the world. 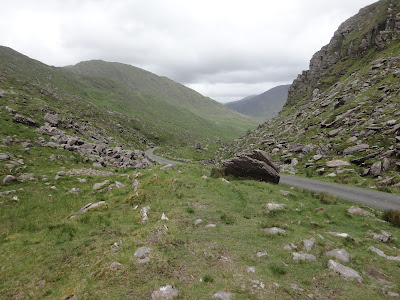 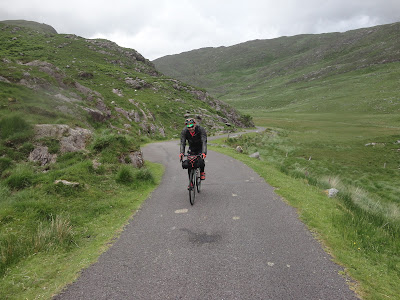 We cycled hard today and as per usual were blown away with the stunning views. Climbing hills makes one hungry and being in this rural part of Ireland we weren't seeing much in the way of shops or food stops. Nothing to worry about though, before we knew it, we were flying down a 10-15k descent which ended at a town with everything you could wish for. We found a supermarket who informed the mobile chippy was the best. Indeed, the mobile chippy was! We had awesome chips (and hake for me, burger for Jamie). The chippy owner was so impressed with our story that he took photo's of us and could not stop singing our praises. 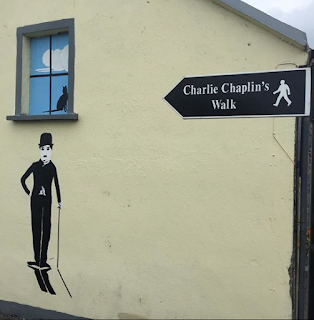 We left the chip shop with full tummy's and smiles on our faces. Our cycling chat was full of positivity today and we would reflect on the day and previous days too. Charlie Chaplain was a topic of conversation today. We're still not sure why he was watching a young lad wee though?! 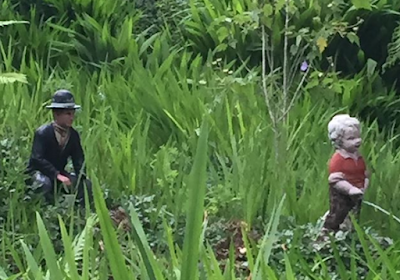 Again we cycled until it was dark. Once it got dark it started to rain. Once it rained, we started to get wet. We figured we had best find a wild camp spot. 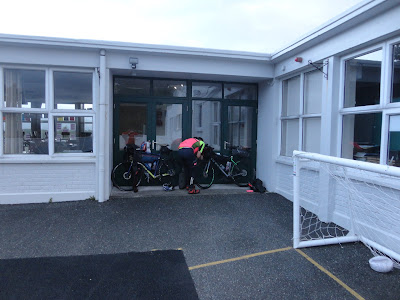 We hadn't slept at a school as yet and now was our chance. Aces. The school had a separate place for us to park our bikes and another place to sleep. Jamie was soon out for the count and I'm sure I followed not long after. 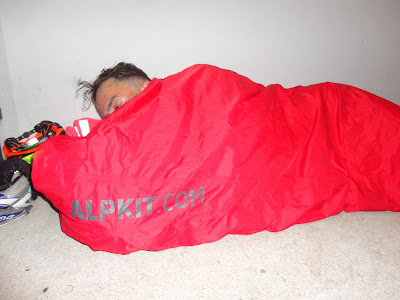 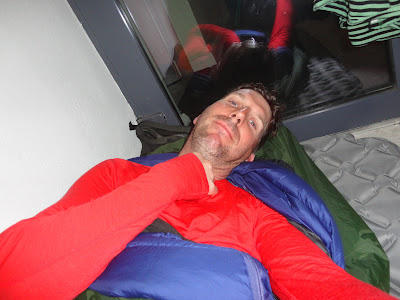