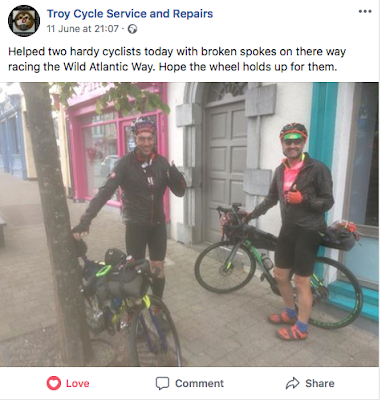 What a day, day 5 turned out to be! After a relatively good sleep (despite my air mat deflating time after time) we were up about 6 a.m. Initial plan for the day was to find a bike shop - a common theme for this adventure. Intelligence from Kay suggested there was a bike shop off-route but not so far away (relatively speaking). What else could we do, than venture out. There was a tiny amount of rain in the air this morning but not the 'wet stuff' we were warned about.
Star Wars was another theme for this adventure. We passed various sites where episodes were filmed.  We also spotted AT-AT's in the distance...

We developed a kinda un-written rule today and that was to stop for a stretch/feed/relax after every 25k. This pattern seemed to work out ok and helped the k's tick by as we cycled in a sort of time trial fashion to find the bike shop. Of course to find the bike shop we went off the official route. Those watching our 'dots' on the tracker system thought we had taken a wrong turn and various texts, emails and phone calls were made to us in an attempt to put us back on track. Thanks folks for that support, however, we had intentionally gone off route. Finding the bike shop was difficult - we went forward and back and up and around all near the Irish sea. We asked a few locals too and eventually found both the house where the bike shop guy lived and his bike shop too. Sadly, bike shop guy was not at home and his shop was closed. Oh well, the scenery was nice. Hmmm. Further intelligence from Kay indicated that there was another bike shop, namely 'Troy Cycle Service' some distance away in Newport. Nothing for it but to cycle speedy style again and head for Newport. 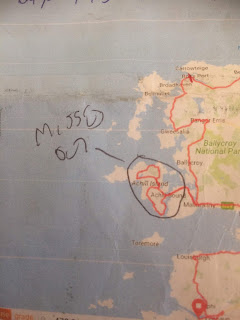 Time was an issue and we had added additional k's already. We took the decision to 'skip out' a little loop section (way less than 100k) and recover lost time to enable us to get to Troy's. We were aware that 'short sections could be missed, however, time penalties would be imposed'. We had never planned to win this race anyway and decided we were touring. The pace we were cycling at felt like race pace mind... 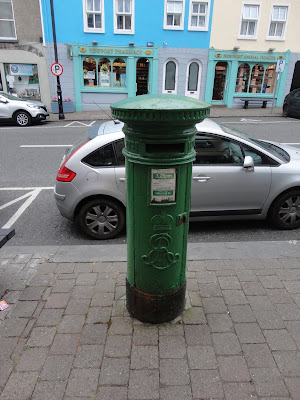 We reached Newport just fine - I think the dog that chased us both earlier in the day had helped us speed up. (I thought dogs were only a danger on the TransContinental race?!) Newport got me thinking about 'divide' all other again. This was down to the green post box I saw. Northern Ireland have red boxes. 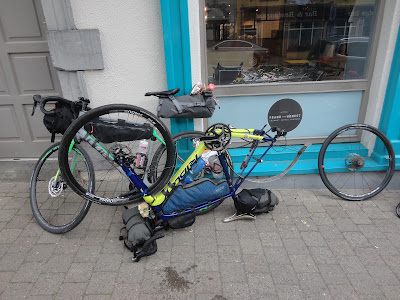 A phone call was made to Troy, who was actually 'Chris' (Troy being his surname). He was super friendly on the phone and appeared to be multi-tasking with lots going on. Essentially he informed (something like) he had to go and pick his daughter up from school, do this, do that and then he'd happily come over to me and take a look at my wheel and would be here in about 1/2 hour. Jamie and I had tea and coffee and fodder in a nearby supermarket and sure to his word, Chris rocked up a short while later. Chris had a bag with him containing spokes and tools and looked at my wheel and assured he'd be able to fix it, no bother. He was in charge of taking care of his family and being full-time dad while his wife was away. He said (something like) he'd go and collect his daughter, do this, do that, come back and pick me up, take me to his home (some 4 miles away in the middle of no-where), fix my bike and drop me back. Wow.

Sure enough, Chris came back for me, with his daughter and took me to his wonderful home in rural Ireland. He learned a lot about me and the TAW cycle race and I learned a lot about him. Super clear was that he was an awesome helpful fella! Chris was also a super cyclist who had competed in no end of races and raced many parts of Ireland and England too. Chris had raced on road and the velodrome. Chris has raced at championship levels. No doubt about it - a real champ!
Chris had my wheel fixed in no time at all and provided me with 4 spare spokes should disaster strike again before the race was complete. It was so cool to see where he worked/lived and hear his stories and meet additional members of his family. Chris took me back to Newport with a fully functional bike (after his busy schedule of dropping his son off to play sport). Thank you Chris, top man!
Can't describe how happy both Jamie and I were after this meeting with Chris Troy. We spent the next section of our race cycling the 'Greenway' as advised by Chris and staying off the main road. Jamie must have spent at least the next hour listening to me sharing stories about Chris. Amongst all our joy and happiness though, there was a reminder that Ireland had experienced some sad times. We passed a 'skeleton famine boat'. Ireland had many memorials or similar to remind about the famine. I was quite ignorant to 'the famine' but remember hearing stories about potato's. Our visit to Ireland, enlightened me somewhat. History is important and I felt it only right that I paste some information I read on Wikipedia as follows: The Great Famine (Irish: an Gorta Mór, [anˠ ˈgɔɾˠt̪ˠa mˠoːɾˠ]) or the Great Hunger was a period of mass starvation, disease, and emigration in Ireland between 1845 and 1849.[1] It is sometimes referred to, mostly outside Ireland, as the Irish Potato Famine, because about two-fifths of the population was solely reliant on this cheap crop for a number of historical reasons.[2][3] During the famine, about one million people died and a million more emigrated from Ireland,[4] causing the island's population to fall by between 20% and 25%.[5]

The proximate cause of famine was potato blight,[6] which ravaged potato crops throughout Europe during the 1840s. However, the impact in Ireland was disproportionate, as one third of the population was dependent on the potato for a range of ethnic, religious, political, social, and economic reasons, such as land acquisition, absentee landlords, and the Corn Laws, which all contributed to the disaster to varying degrees and remain the subject of intense historical debate.
The famine was a watershed in the history of Ireland,[1] which was then part of the United Kingdom of Great Britain and Ireland. The famine and its effects permanently changed the island's demographic, political, and cultural landscape. For both the native Irish and those in the resulting diaspora, the famine entered folk memory[fn 1] and became a rallying point for Irish nationalist movements. The already strained relations between many Irish and the British Crown soured further, heightening ethnic and sectarian tensions, and boosting Irish nationalism and republicanism in Ireland and among Irish emigrants in the United States and elsewhere. 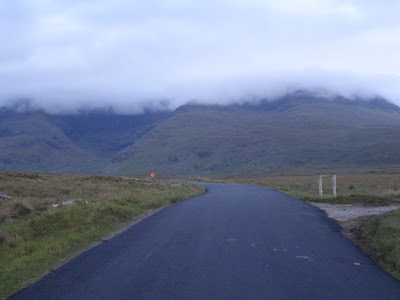 This was definitely a truly awesome adventurous day. We cycled some amazing roads and had views that blew our minds. The kindness of strangers was humbling and greatly appreciated. The chasing of dogs was not so great and we were chased by dogs twice on this day. Another phenomenon we noted was that the big hills appeared to suck the clouds from the sky to cover their tops. Beautiful, stunning and kinda mysterious! 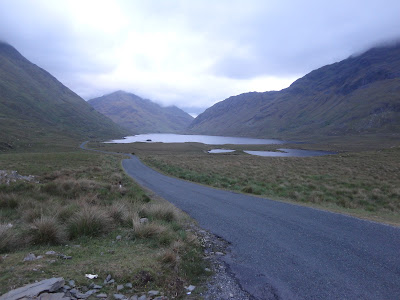 This stretch of our adventure was the most stunning scenery wise. Is hard to believe I took so few pictures as the whole entry into Connemara was stunning. Mind blowing, amazing, awesome. The mountains, the colours, the lakes, the textures - my words (or pictures) would never describe or show the true beauty of this place. 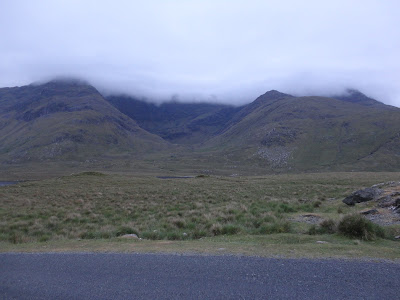 This day of cycling ended at checkpoint 2, a hostel in Leenane Connemara. Our brevet cards were stamped and we had a real bed (a bunk) to sleep in (in a dorm with about another 8 snoring and farting TAW cyclists). The midges here were a real menace but this mattered little as we were able to shower here. My shorts were so stinky that I showered wearing them too and gave them as good a clean as I could. All the folk in the dorm were sleeping with the lights on. I turned the lights off and tuned out. What a great day this was! 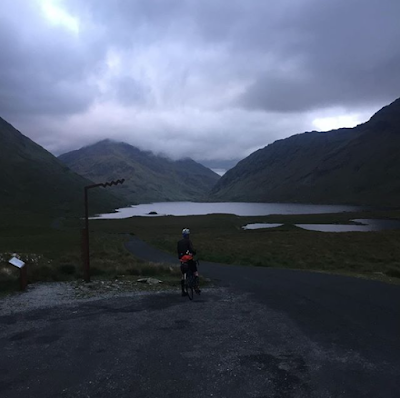